(by the Glee Cast)

I almost forgot that Julie & I compiled a little list that we like to call "Friends' Theme Songs: Venture Leader Edition"! I could try to come up with songs for the other adult volunteers in the student ministry, but a couple of the ones that went on Venture already had a song. So I figured these few are good enough for now! Plus, there's a super cute picture of all of us at the zoo: 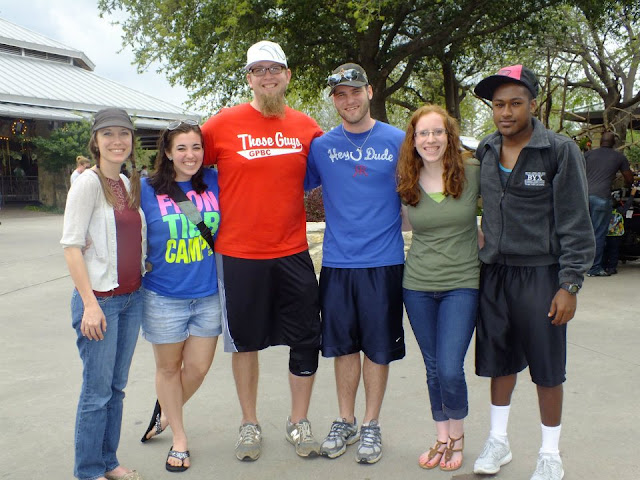 We'll just go from left to right, OK? As you probably know, that's me on the left. I don't really have a song, because I prefer to assign songs to other people. {OK, well I do have a song, but it really isn't pertinent to today's topic...} So we'll start with Nicole. There are a lot of phrases that Nicole says on a regular basis. Things like: "Shut it down!" & "Oh hey" ~ just to name a couple. But my favorite thing that she says is, "Dad gum." And it's probably my favorite because of this song:


Then there's Wade, but I already told y'all his song (in the "GPBC Pastors & Wives Edition"). So we'll move along to Aaron: he loves Batman, so the theme song from the show is what suits him best. Julie is a huge Shane & Shane fan, so I love the fact that they have a song with her name! And finally...Dylan. You'd think that he'd hate me for making his a Justin Bieber song, but the dude seriously has Bieber on his iPod. And he played it for the people in their van. Hmm...

How's that for a short but sweet post?! Thanks for humoring me by reading my randomness... ♥

Jen Price said…
Yes, super cute photo. I love that you assigned everyone a song!

Side note: Thanks for the angry birds link. So many great things on there! I downloaded the font for his invitations!
March 28, 2012 at 2:51 PM