Now for the Venture post ~ where I get to tell y'all about the mission trip that my baby girl & I took with the students last week! 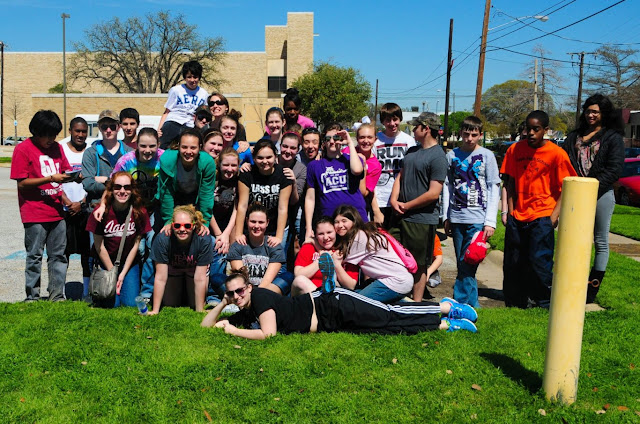 We drove up to Dallas after church on Sunday in the pouring rain! It was my first time to drive a 15-passenger van, which turned out to be a whole lot easier than I thought it would be. In fact, Julie told me several times that she was impressed with my skills! {& I must confess that I felt quite empowered driving something so tall that I had to jump to get out of, but why did I get the one van without a step?!} Somehow we got to talking with British accents before we got out of Houston, so we decided to talk that way for the entire drive to Dallas. For the next few days, we would randomly slip back into it. Is that weird?

Anyways...we started out each morning with devos at a park near Mission Arlington. 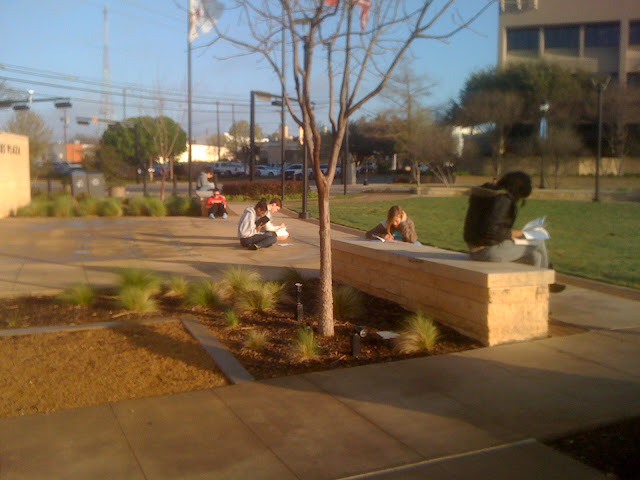 After that, we got our assignments & headed out. On the first day, we got to play with kids & share Bible stories with them. That morning we dropped half of the group off at an apartment complex, while the rest of us piled into two of the vans & headed out to a different apartment complex. According to Aaron's map, it was close by. But we couldn't tell how close...it turns out that it was right across the street, & we totally could've walked there! :D In the afternoon, we split up again & went to another apartment complex and a mobile home park. 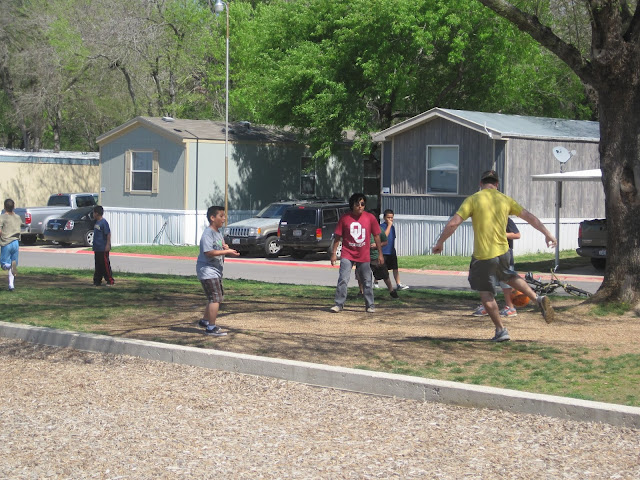 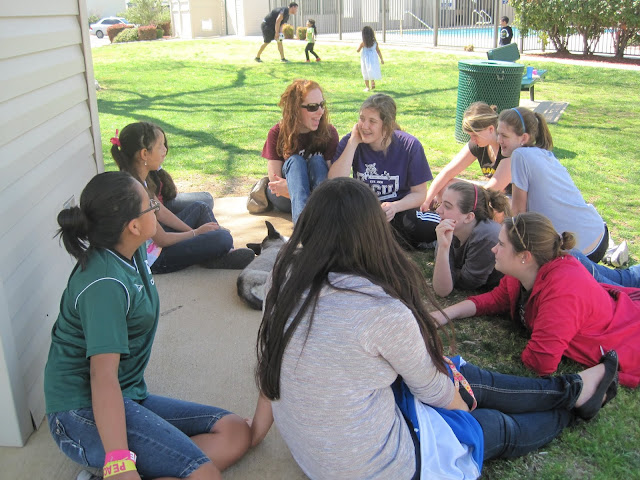 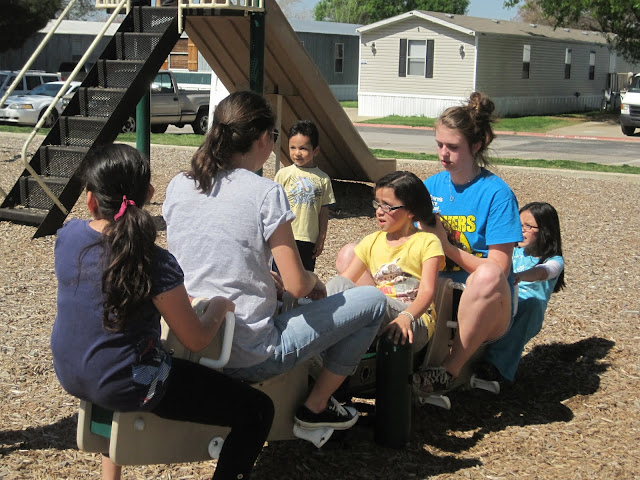 There was a cute & sassy little girl who got ahold of my camera for awhile. She took a bunch of pictures of us, instructing us how to pose & such! 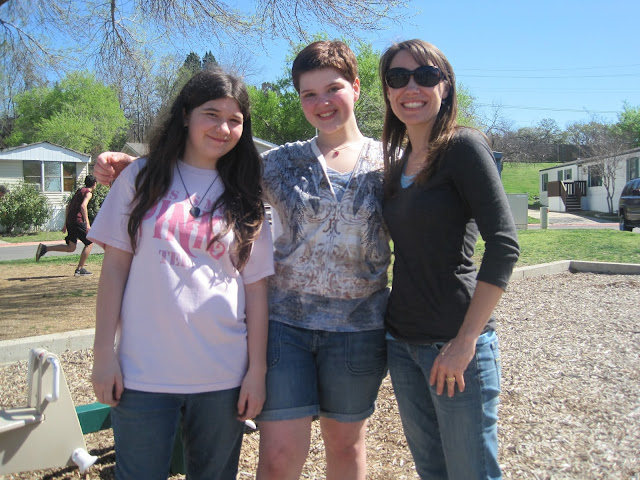 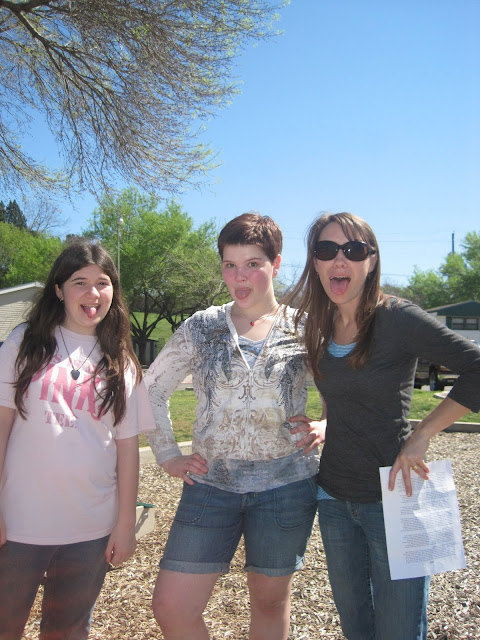 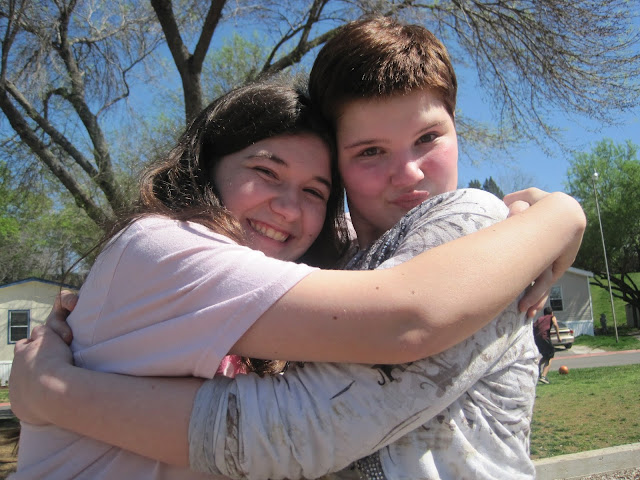 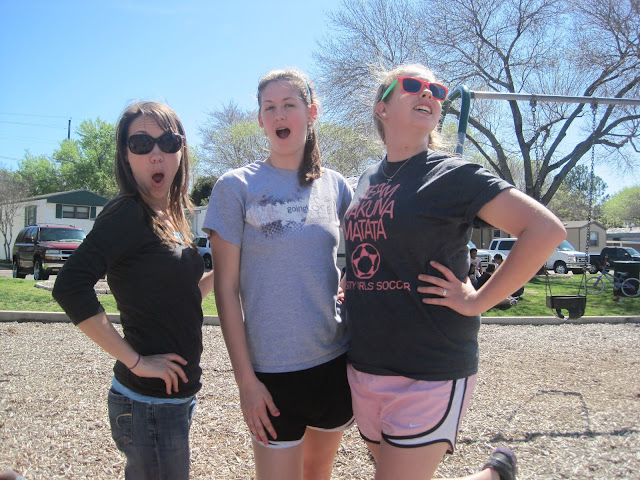 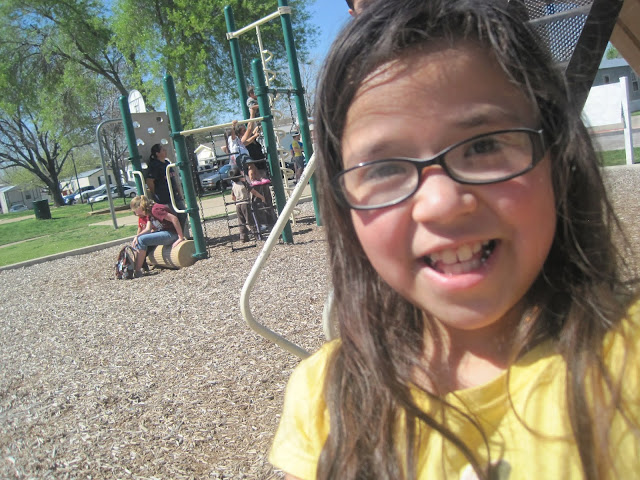 {She looked through them, trying to find her favorite picture. I told her this one [she took of herself] was mine!} :)

The second day was a little more stretching (for lack of better words). We went to another apartment complex to do some cleaning. Some people cleaned up the courtyard, while the rest of us emptied out & cleaned up some abandoned apartments. These girls were troopers & cleaned & disposed of some terribly disgusting stuff. 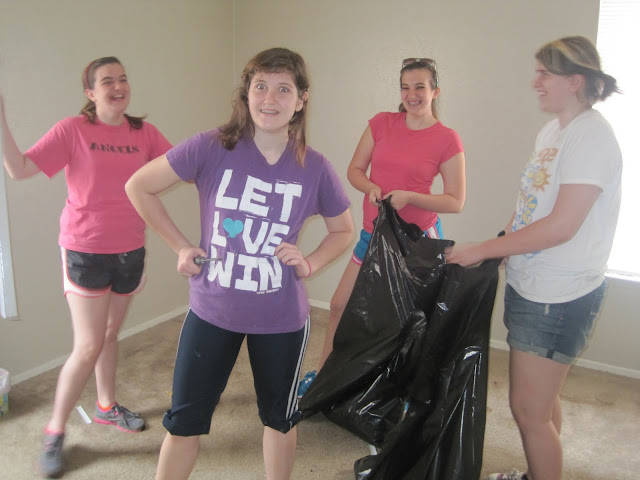 If I can be completely honest with y'all, this was harder than I thought it would be. I can lack the motivation to clean my house at times, but I really don't mind cleaning. This was a completely different story, though. It may not look too dirty from what you can see in the picture, but there was some extreme nastiness in the bathroom & kitchen. I don't have a very sensitive gag reflex, but I seriously had to go outside a couple of times so I could keep from puking. I kept reminding myself that it was for Jesus, and I had Joey turn on some worship music so I could get my mind off the dirt & stench. There was something in the kitchen sink that to this day makes me gag just thinking about it. Kristin (one of the students) offered to clean it for me, & I bought her dinner because I was so grateful!

A big part of my task was emptying & cleaning the fridge. I am so incredibly thankful that it had been plugged in for the two months that the apartment had been empty! Otherwise it would've been absolutely horrid. It still wasn't pretty, but it could've been so much worse! It was nearing lunchtime, and we weren't sure if we would be going back to that complex in the afternoon. I was tempted to clean the outside, because I knew I could do it quicker than I could finish the inside. I'm not trying to over-spiritualize things, but I really felt like the Lord didn't want me to do that. I saw this picture in my mind of a sparkling clean refrigerator on the outside that was still filthy on the inside, and I was reminded of the scripture about the dirty cup/plate & the whitewashed tombs. I continued working on the inside of the fridge & thought it would be a great surprise if the apartment manager saw the dirty exterior and opened it to find that it was clean inside! As it turns out, there were other apartments to clean & plenty of other work to be done in that complex. So we returned there after lunch, and I had time to complete the entire fridge (& more).

In the evenings, we did fun stuff! We saw The Lorax in 3D, went to Speed Zone... 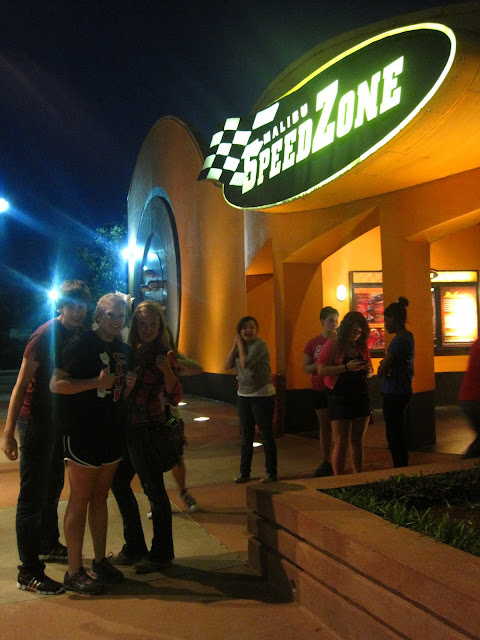 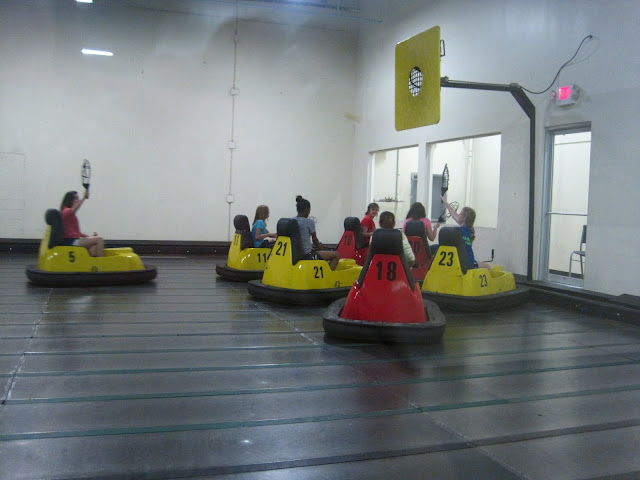 {ftr, you're able to stop a little easier if you remember that there's a gas pedal. And that your foot is on it.}

...and went to the zoo (before we drove home on Wednesday)! 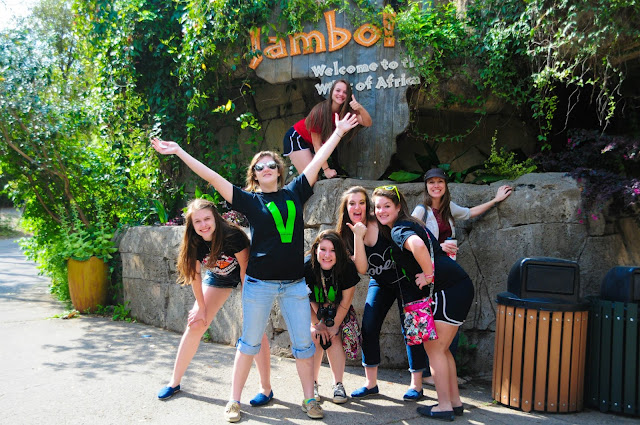 I have SO many more pictures & stories I could share with you, but this is already quite long! Venture was a wonderful few days with some amazing people, and I'm so glad that I get to serve the Lord (& have fun) with them!

Brooke said…
love the "white-washed refrigerator" comparison! :) i think its awesome that you and your girl can do things like this together.

in other news - i see from the picks that OU means something completely different in your neck of the woods ;) jay is all the time getting asked why his "oklahoma u" hat is green. silly billies! OHIO university bobcats are green. :)
March 22, 2012 at 10:14 AM

RR Mama said…
I'm so glad you were able to go with your daughter on this trip and that you were able to over come the obstacles by thinking is all for the Glory of God.
March 22, 2012 at 10:44 AM

Zion said…
You really are a trooper. I am not sure I would be able to handle grossness like that in my current state. We saw Lorax too, but I've never played whirly ball, looks like fun.
March 22, 2012 at 10:07 PM

Jennifer {Studio JRU} said…
Looks like so much fun Amy! Love all the great photos. How neat to do this together with your daughter. Memories to last a lifetime! :)
March 22, 2012 at 10:37 PM