This week has been a pretty normal week with nothing too exciting going on. We had a Pajama Day at MOPS on Friday! The only other bit of excitement was the rodeo with my dad & aunt last night. We saw Reba, who I don't think I'd ever seen in concert before. I was afraid I wouldn't know any of her songs, but she did a bunch of old ones that I actually knew. How about that? I wanted to show you a picture of Reba, but something's all wacky with Picasa. I can't embed the photo that I want, but I can show it to you in a slide show. Now I wish I had taken more pics...


Random little side note {surprise, surprise}...when we're at the rodeo, we usually root for the Codys. Maybe that's weird, but we have no frame of reference for who to cheer on. {ftr, we had no idea that we had given Cody a "cowboy name" until after he was born & several people said it. I guess since we both grew up in Texas it just seemed like a normal name?} Anyways, last night there was a total of four Codys in three different events. It was difficult to choose which one to root for in Saddle-bronc riding (where there were two of them), so we went with the Cody from Texas. (He lost to the other Cody, in case you wondered). In the bull riding competition, we had to root for a guy named Tyler even though he was competing against one of the Codys. Dad & Aunt Linda had seen him get injured & taken to the hospital the night before, yet he was back last night. I know nothing about the rules, but his bull did something wrong & bucked him off so he was given a re-ride option. On his second ride of the night, he had just made it the required eight seconds when he got bucked, gored, & stomped on! {There's a picture here, though this article isn't about him. idk} It felt like a scene from the movie 8 Seconds. There had already been another stomping incident earlier, & it was a bit scary! Anyways, our man Tyler ended up winning the round ~ what a trooper!

Speaking of Tyler, today's song is another one of Jenny & Tyler's! {see how I did that? Nice segue, huh?} I'm really liking them a lot these days. If you haven't listend to their stuff, you should totally check them out! I accidentally discovered that their album lyrics show up when I'm using the iPod feature on my phone. I've only seen one other one like this, but I wish all albums had this feature! I took a picture of my favorite part of today's song: 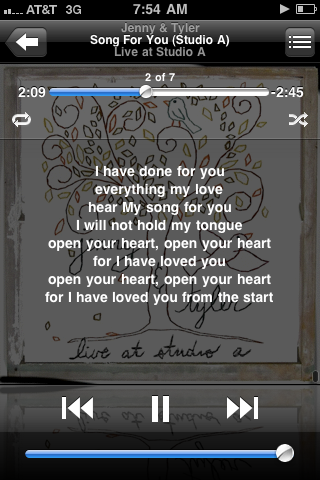 I hope y'all are having a wonderful weekend!