So, I'm pretty much loving The Reliques! I've been listening to them & Donavon Frankenreiter all week. My iPod got left at home for a few days, so I listened to The Reliques CD when I was out & about (plus they have a lot less songs, which makes it easier to listen to the same one multiple times) ~ so they won! If you've listened to them at all (since I told you to check them out), you probably won't be surprised to know that this song is my favorite. I especially love the part where they go, "Doo doo doo doo doo doo doo..." {it sorta reminds me of a super cute song I blogged about last year!} It's a catchy little tune that I find myself humming all.day.long. And I love it. Plus, I like what it has to say. I don't think I can pick just one favorite line. Can I just post the whole thing? Of course I can! Since this post will probably be a bit lengthy, I'll just post the first verse:

I'm also liking every time they repeat something. Not sure why, but I like it...for instance, "Though your weary, weary, weary bones may break."

Speaking of The Reliques, Laura reminded me that I completely forgot to mention something when I told y'all about their concert last week: we got mistaken for being younger than 21 on Friday night! Ha ha!! How crazy is that?! We showed our licenses to the girl at the main door, but the girl at another door put X's on our hands! It must have been darker than I realized in there, because I certainly couldn't pass for 21 in the light!

I haven't managed to show y'all any birthday pics yet! This is Lauren, my beautiful birthday buddy: 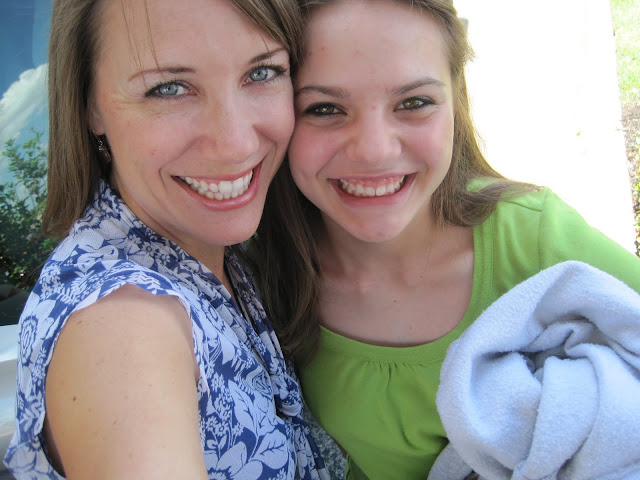 & my yummy birthday dessert from Cheddar's: 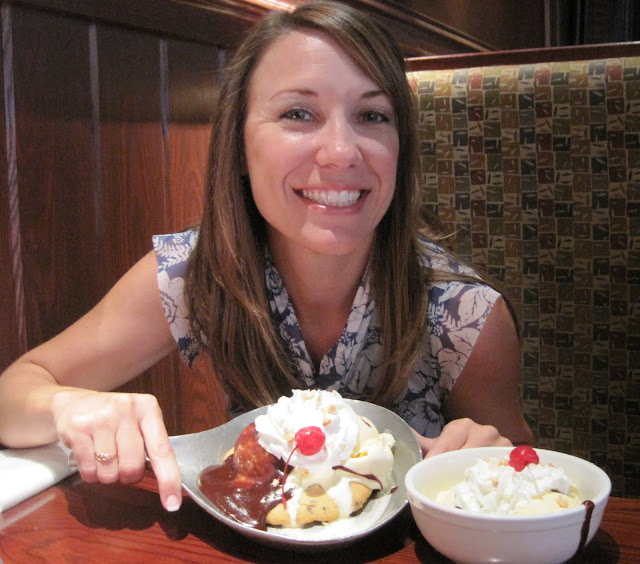 For the record: I only ate the Cookie Monster ~ the kids ate the sundae. I'm not sure why they made me pose with both desserts. They must like to make me look like a pig! I think this is what happened in the Johnny Rockets picture from my birthday dessert post! I still have one more celebration on Friday (with my birthday girls), so I hope to have a picture for y'all next Saturday. Amy's making me a cake that I'm already drooling over!! I can't wait!

The kids & I went to a little water park with some friends from school on Monday! 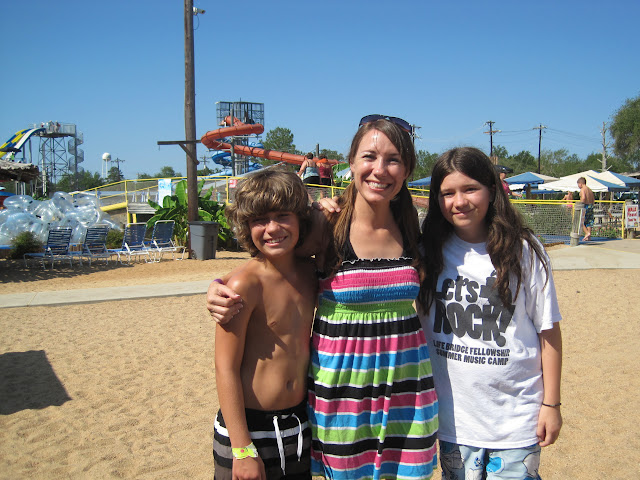 {It reminded me of a little MIShap that happened a few years ago. You're going to have to wait 'til Monday for it, though...}

Do you remember me telling y'all about the neighbor dog who dug his way into our backyard? He was at it again this week, only this time he was doing a little landscaping in our front yard. 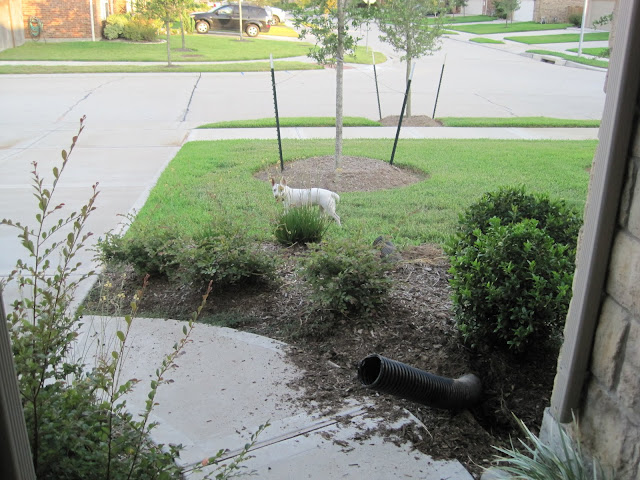 We're pretty sure he was digging for a mouse. I saw one run into the drain thingy last week. 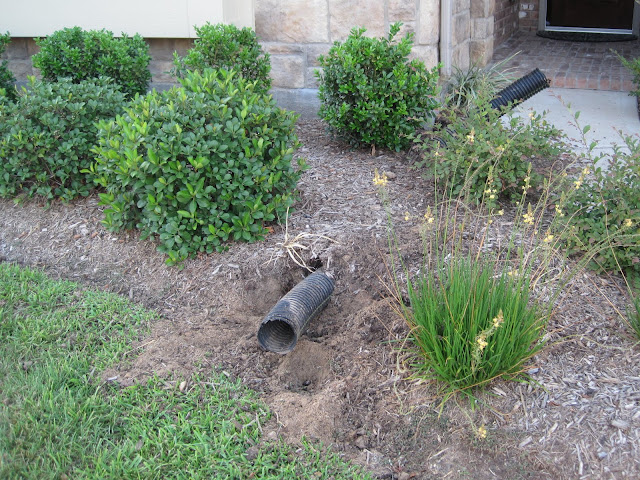 I know this is dragging on, but I have to show you a note that Elly wrote & pinned to the board in the kitchen: 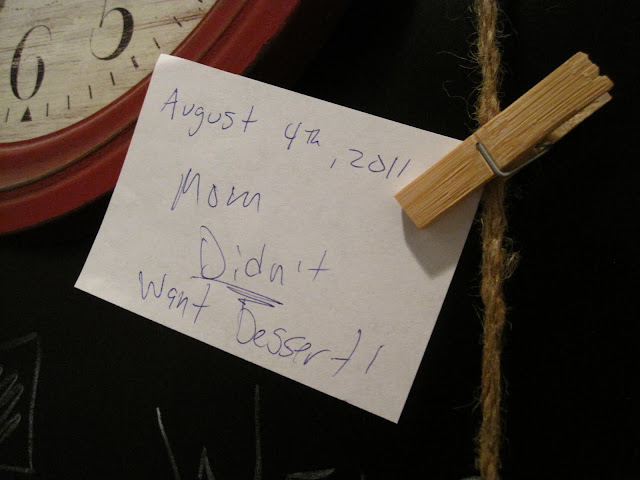 {I know it's a shocker! The fact that Elizabeth made a note & Chris had me repeat it (so he could record it) proves that the family has never heard me say it. I really don't think I've ever uttered those words in my life! Even when I wasn't eating much, I would eat dessert! Granted, I'd make a Kit-Kat last four days, but I would still eat dessert!}

Baby girl & I watched The Last Song last night. NOBODY WARNED ME!!!! I should have known, because it's based on a Nicholas Sparks novel. But I could've sworn I asked somebody about it. I don't remember who it was, though. And maybe I asked the wrong question. [I don't want to ruin the ending for anyone ~ so if you haven't seen it & want to, this is your last opportunity to skip to the next paragraph before I divulge something you probably don't want to know!] I think I asked if "one of them" died, and by "one of them" my friend assumed that I meant the couple. And I'm sure I did. But the dad dies of cancer! That's just as bad!! So from now on, if I ask you about a movie, please just tell me that I should or shouldn't watch it. And if you currently know of any movies that I shouldn't watch because somebody dies of cancer, please be a friend & tell me not to watch them. Thank you!

Before I go, I have to share a funny text dialogue between my dad & me ~ but of course I have to explain a few things beforehand...He has a couple of sports cars, & he doesn't like to "ruin" them by putting the license plate on the front. He resisted putting one on his first GTO for awhile, and when he finally did he promptly ran over something that ripped it clean off! After it got fixed, he never put it back on. And he didn't put one on the next GTO either. He gets pulled over occasionally, but the cops just want to look at his car! Every once in awhile they warn him about the front plate. He got a ticket for it once, but he figures $75 every six or seven years isn't bad. So he hasn't put one on his new Camaro (& won't do it unless he finds out there's a steeper fine or punishment). Well, I accidentally broke the front license plate off my van the other day, so I had to tell my dad about it! 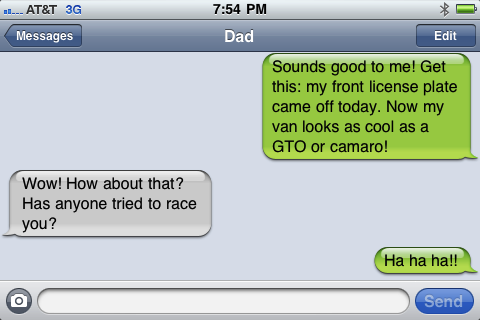 Well, once again I've got a fun/busy day! We've already met Dan & Amanda for brunch ~ along with this cute boy: 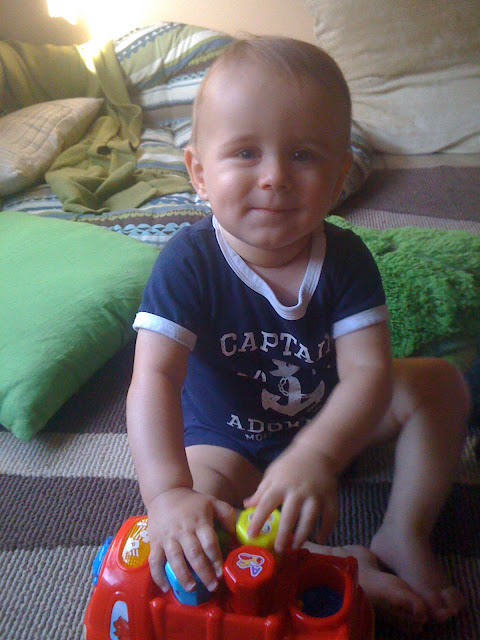 & I made a Dr Pepper cake for Lance's ordination tomorrow night. {That cake is so good that I may just have to blog about it sometime!!} Then in just a little while, we're going to a mac n cheese place & comedy club with our community group! I hope y'all are having a super great weekend!! ♥

Zion said…
I can relate, Jeremy always makes a big deal out of it if I turn down chocolate or say something that a dessert is too rich for me or something : /. That little boy is SUPER cute.
August 8, 2011 at 7:49 PM