Though Texas may have some unbearably hot days approaching, we also have some beautiful days earlier in the year (when Northerners are still stuck in snow)! One benefit of those Spring days are loads of beautiful flowers, and I have some pictures to prove it! {Jennifer, your request has been granted! If only I was half the photographer that you are...}

My butterfly bush has grown taller than the fence, & it makes me SO happy! 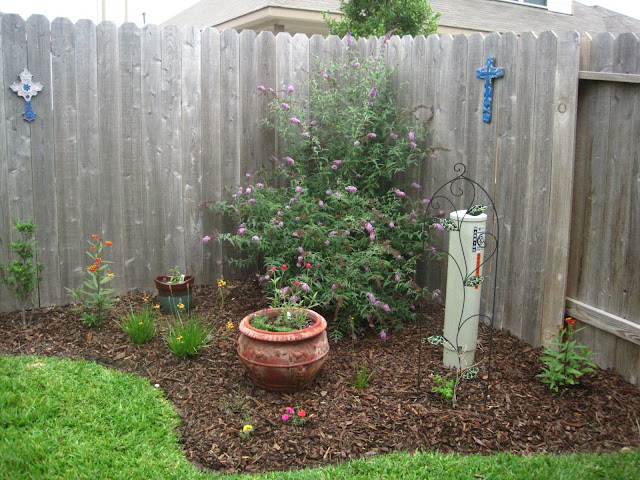 {& maybe one day a vine will actually grow on that trellis! They keep dying on me!}

In the opposite corner, I have a sad little Esperanza! This thing really will get HUGE ~ but I planted it in the fall, so it didn't have a chance to get established before winter. I'm just glad it came back! It had died down to nothing, but I kept watering it this Spring. One day a few weeks ago, I discovered that it was alive! I ran into the house, excitedly yelling, "There's green on my Esperanza!" {The kids thought I was a little crazy & didn't know why I threw in some Español!} But I'm so excited, because it'll be gorgeous one day! If you'd like to see how it should look eventually, check out this site. 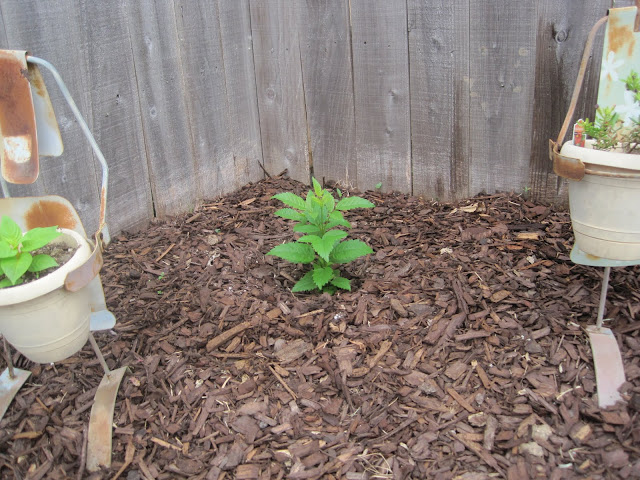 I finally gave in & got some Knockout Roses last week. They're all over the place down here, which is part of why I've resisted up to this point. But after losing some supposedly evergreen little shrubs that never really grew well last Spring, I decided it was time to get something that I knew would work well here. Plus, they're pretty! 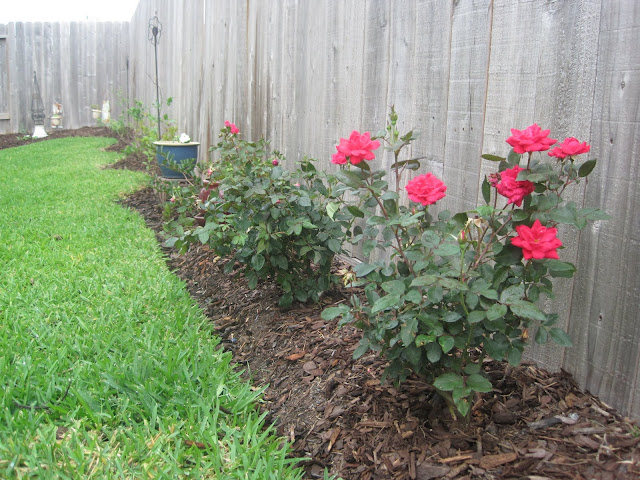 I have some blueberries that'll be ready to eat soon! 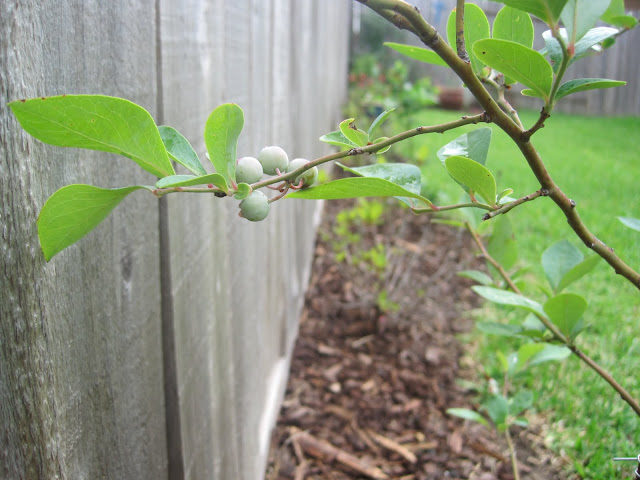 And some pretty flowers... 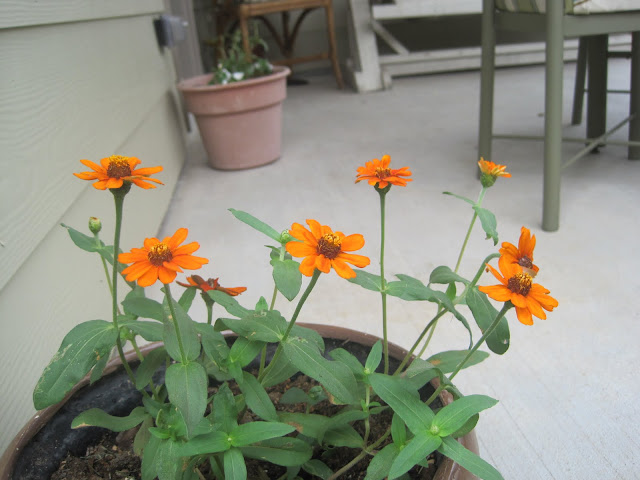 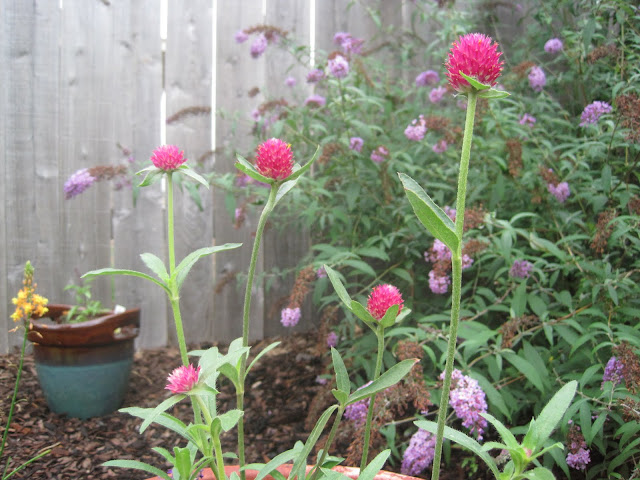 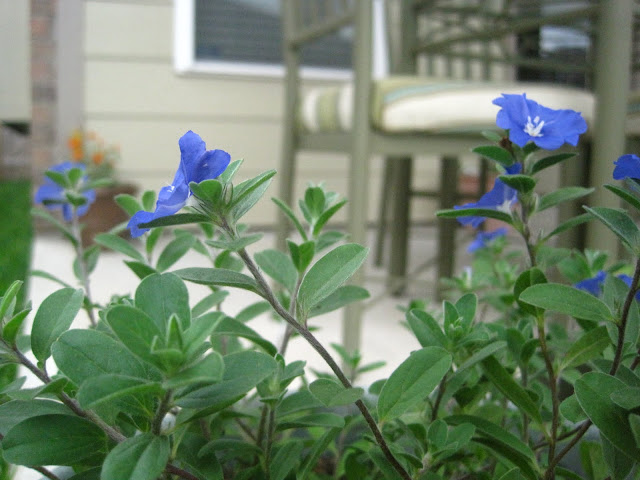 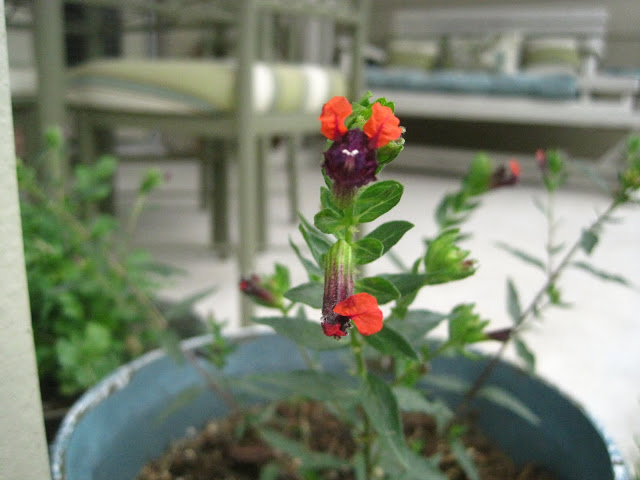 {How cute is this batface?!}

I have also moved a couple of azalea bushes ~ they're quite sad right now, so I won't show you a picture yet! & I've transplanted some sod to fill in the holes where a neighbor dog has dug his way into my yard. Yes, you read that correctly. I've heard of dogs digging out of their yards, but who ever heard of a dog digging in to a yard?! Alas, it happens here in my part of Suburbia. One day we saw some movement in the back yard. Cody realized it was a dog, but Pepper was right there inside with us. Lo and behold, it was our neighbor dog Sam! We went outside to see how he got there & discovered holes under both gates! 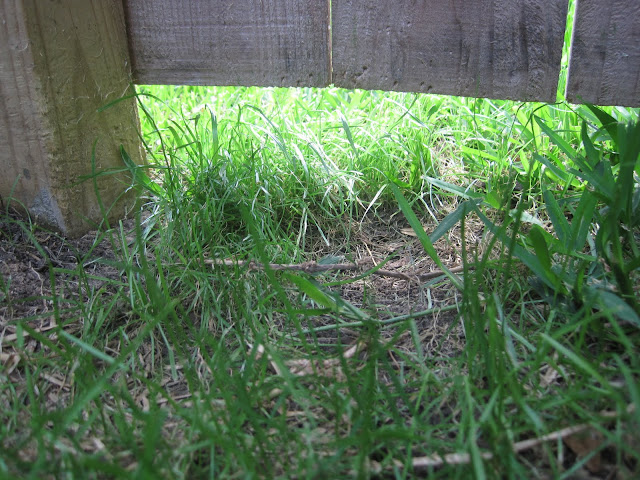 Pepper thinks she's a big dog, so she has no idea that she can fit through Sam's hole. {He looks like Spuds MacKenzie ~ did I just age myself? OK, maybe the Target dog then. Anyways, he is definitely bigger than my baby puppy.} 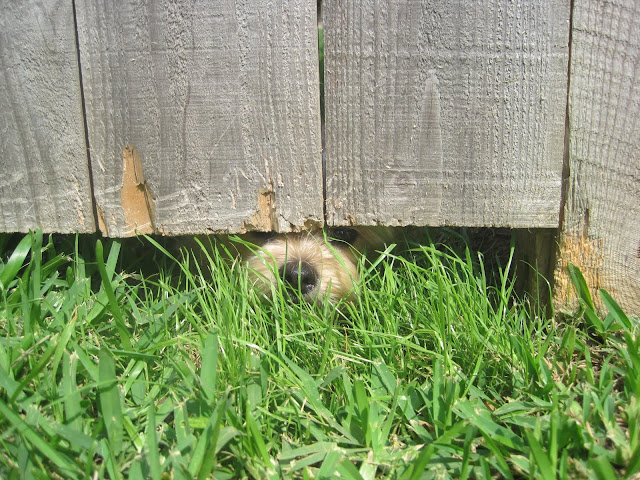 I had tried some filler grass seed & dirt, but that didn't seem to do the trick. So, I put more dirt & some pieces of sod there instead. Hopefully this works, because it ends up a muddy mess without grass there! 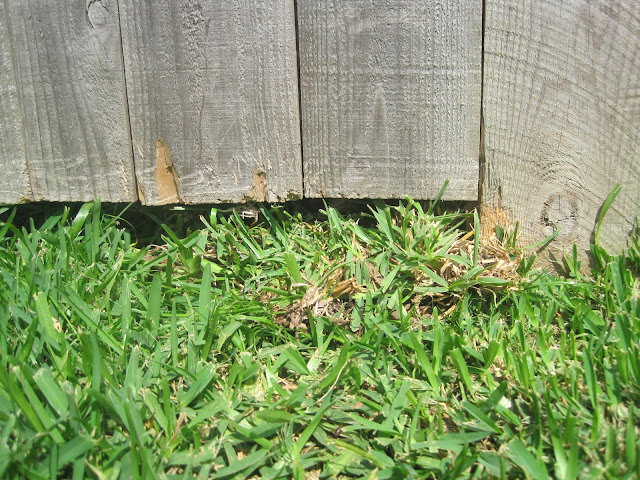 So, that's what's going on in my yard these days. What about yours?

Anonymous said…
my yard looks really crappy, sad to say. :( have you always been into gardening or just recently since the kids got older? i would SO LOVE to do what you're doing... i just feel too tired thinking about tending to it. :/
April 26, 2011 at 7:44 PM

Maggie said…
How beautiful! I love flowers. I live in an apartment so don't have too many plants but I've been growing a windowbox full of herbs from seeds and they are doing great! Can't wait to start harvesting them!
April 26, 2011 at 9:17 PM

{amy} said…
To answer Hannah's question: I've always liked having pretty flowers, but I didn't do much gardening until my kids were a little older! In our first home, I planted a few things that were easy to maintain. I may have done more gardening there if we hadn't lived across the street from a rock quarry (hence the yard was solid limestone)!
April 27, 2011 at 8:28 AM

Jennifer {Studio JRU} said…
Yay... my request was granted! :) And what are you talking about... your photos are gorgeous! I *loved* the garden tour. You have beautiful gardens! I am so happy to hear I am not the only one that gets that excited when her plants come back after a rough winter! lol Thank you so much for sharing your flowers with us! ♥
April 29, 2011 at 7:08 PM

Zion said…
It looks awesome. We have planted blueberry bushes for the 2nd year in a row now with no luck, although there's still hope. Great job!
April 29, 2011 at 9:10 PM