After posting the Mortal song the other day, I busted out the Pura album & listened to my favorite song over and over again. I'm not real sure what the difference is between this song & "The Nightfall", but I like them both. A lot.

As I mentioned before, it's officially summertime! The kids & I celebrated the last day of school by going out for empanadas 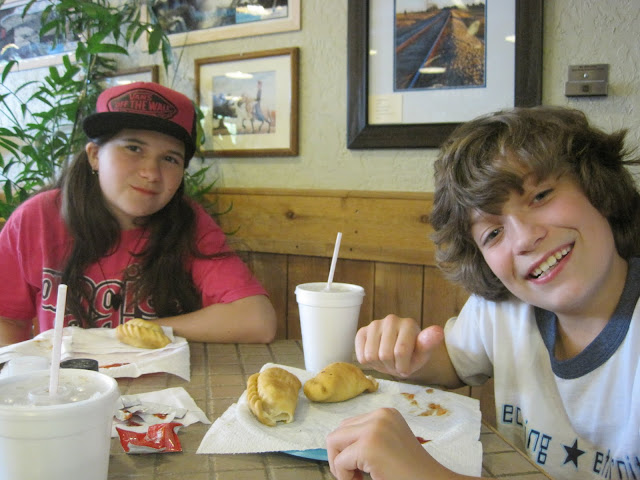 {I'm sorry, Amanda! But it was just us and nobody else, so we remain faithful to y'all!} Then we drove around looking for a park for Cody. Elly had gone to a swim party earlier in the day, and Cody wanted to do something fun like go to a park. For the record: going to a park at 2:00 in the afternoon is so not a good idea right now! So we found him a park after dinner instead.

Our first day of summer was super great! We hung out with Amy & Alex all day! Amy & I made Rice Krispie Treats & hot dogs that we took to the pool. I was reminded of college days when we attempted to blow dry our hair at the same time...Apparently we were using too many kilowatts, because both of our blow dryers stopped & she had to reset the breaker. Twice. Good times! Anyways, the kids had pool parties & such that night ~ so after dropping our kids off, we met our husbands for dinner at Gringo's. Somehow we ended up playing a little song game at the dinner table. Wade & I are alike in that we'll burst out in song when somebody says something that remotely resembles a song we know. {Our homes are like living in a musical, which is super fun!} We were discussing our song burst tendencies when I think he sorta challenged me to a song duel or something. I don't know, but we started naming (& sometimes singing) songs that mentioned flowers. Then we moved on to songs that said the word "light". Anyways...Alex took this pic of Amy & me at the pool! :) 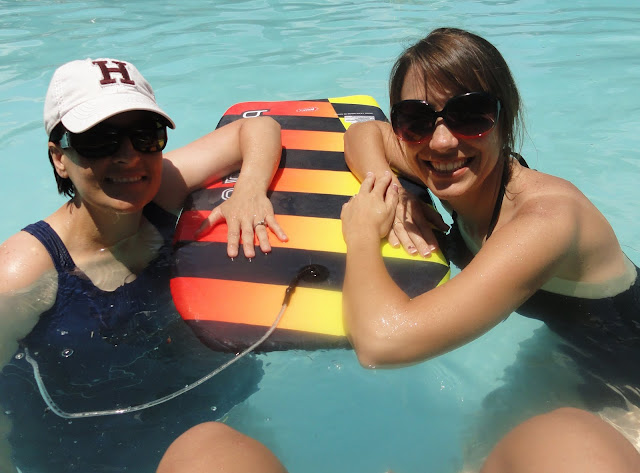 {We floated around on that boogie board together, & I'm sure we looked gay. But we don't really care}

Yesterday, I went to a baby shower for my friend Sam. I met her about 4 years ago, when her husband was filling in as the worship leader at our church. After we had been friends for a few months, we realized that I knew her brother when I was in high school. He was best friends with the boy I dated my Senior year (the one whose family refers to me as "Bowling Shoes"). Small world, huh? Anyways, she's a very sweet friend. 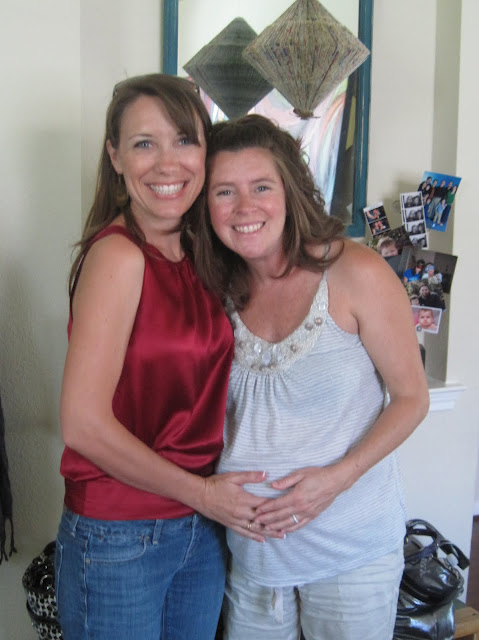 We also went to a birthday party for a crazy, amazing man named Bob. This man loves Jesus. He never misses an opportunity to tell somebody about Him. He has been a Christian for 14 years and read through the Bible 43 times {or something like that ~ & that was the number he told me in January, so I'm sure it's more than that now! He said you can read the entire book of Philippians while smoking a cigarette!} He used to put on a Christian music festival called BlessFest, which is how we first heard of him years ago. Then it turns out that he went to our church when we first moved down here. He lives about an hour & 1/2 away, but he'll go to lunch with Chris & Freddy when he's on this side of town. It never fails that by the time they're through with lunch, they'll be heading over to Fry's to buy the waitress a new computer for her daughter (or some other need that he has found out about while they're eating). Anyways, Bob was diagnosed with Stage IV brain cancer at the end of the year, and he was given 14-16 months to live. He has accepted that news with grace, and he is making the most of the time he has left. Somewhere in the neighborhood of 80 to 100 people gathered at his house to celebrate his birthday yesterday! It was a reunion of sorts for a lot of people we used to go to church with, and it was a time to meet new people who love Bob, too. We spent most of the day with a man named Kent {who we apparently only see every 6 years, to the day!} We also met a beautiful young woman named Sophie who is also battling brain cancer. Oh, and there was a lot of really great food! Bob gave a speech after we sang him the birthday song:

This is Bob with his beautiful wife Dondra: 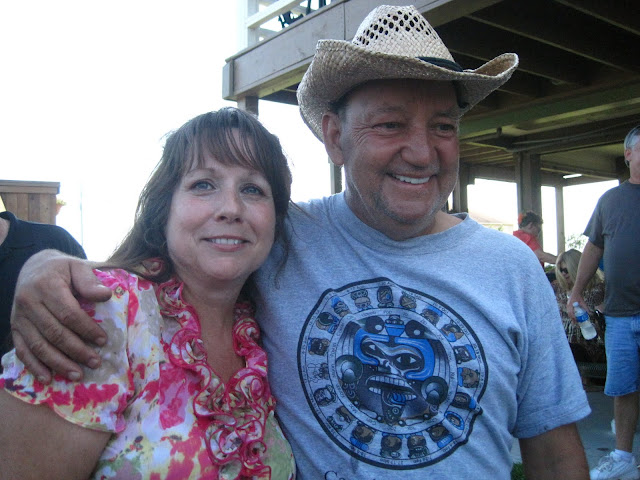 & here's a little video that Bob posted on facebook a little while ago:


I'm sorry that I'm posting this a day late! We didn't get home from "Bobville" until after midnight, and I wanted to post the pics & stuff from yesterday. Then today I went to another baby shower after church, and we had dinner at Brian & Jana's {I wasn't begging for a dinner invite when I mentioned Caleb withdrawal the other day, but I'm glad it worked out!!} So I just now have the chance to tell y'all about the last few days ~ & believe it or not, I've actually left out a few details! ;)

One final thing...this week I discovered a verse that sorta applies to this little blog of mine! I've read it many times, but somehow it never jumped out at me until I read it the other day: "Your decrees have been the theme of my songs wherever I have lived." (Psalm 119:54) ü

Jennifer {Studio JRU} said…
What a great way to celebrate the last day of school! You are so pretty Amy! Love these photos. Sounds like you have been busy. Fun busy. LOVE the verse you found. Perfect! ♥
June 6, 2011 at 9:23 PM

I was a little shocked about the empanadas, but it's understandable. They are delicious and quite celebratory! AND since it was juyst you three, totally ok. ;)