{I couldn't find a good version of today's song, & Cody was appalled that I would even consider posting "We Rock" (from Camp Rock). I found this sampler video of the production that the kids participated in last week. I don't expect y'all to watch it all ~ but if you have any desire to hear a clip of today's song, start at 7:46}


As y'all know, my kids got to spend last week at my brother's house. They went there to participate in a music camp that Wendy (my sister-in-law) led at their church all week. The camp consisted of learning a musical (called Let's Rock!) as well as Bible lessons that taught them about using their God-given gifts in the Body of Christ (the theme of the musical). Their church is about an hour away, so the kids were super excited that they got to spend the entire week with their three favorite cousins (rather than me drive them each morning/afternoon). They went to camp in the mornings with grand plans of swimming & playing the Wii each afternoon.

And that's how things went until Wednesday afternoon...

...when Chase (the youngest) got a stomach bug from another camper. Wendy called me to let me know & give me the option of taking my kids home. Maybe I'm weird, but I'm of the mindset that since the kids had already been exposed to a virus then there was no point in bringing them home. Of course, I offered to get them if it would make things easier for Wendy, but she said that 5 kids are easy when it's those 5 kids that we're talking about! {I know I'm a little biased, but it really is true! We are so blessed to have such good kids! And when they're 7-12, they don't require much care. 6 or 7 years ago, it wouldn't have been as easy!}

A few hours later, Wendy called me back to say that Cody was sick, too. :( Again, I offered to pick him up (well actually, for Chris to pick him up ~ 'cuz he was closer), but she said it was best to keep him in one place & not put him in the car for an hour while puking. {Good call!} Fortunately it was only a 12-hour bug, but my poor sweet boy puked all.night.long! And poor Wendy was up all night dealing with both of our baby boys. And puke all the way down the hallway. Nice. {I hope you aren't trying to eat!}

This was the scene on Thursday: 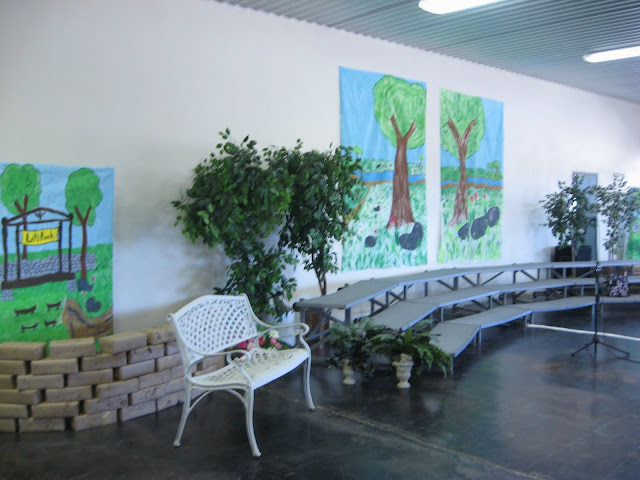 By Friday morning, everyone had gotten over it and camp resumed. And fortunately for Wendy, our other three kids remained puke-free! Which was a good thing for many reasons ~ one of them being that Cody had a major role and Elly & Ryan had big parts, too! The production turned out SO good! Wendy did an amazing job teaching the songs & working with the kids on their lines. You wouldn't have a clue that they only worked on it for four days! 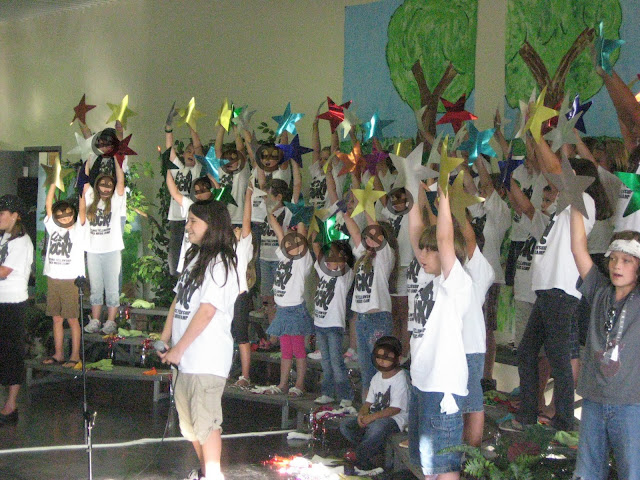 Kerry & Wendy took pictures of all five kids before the musical: 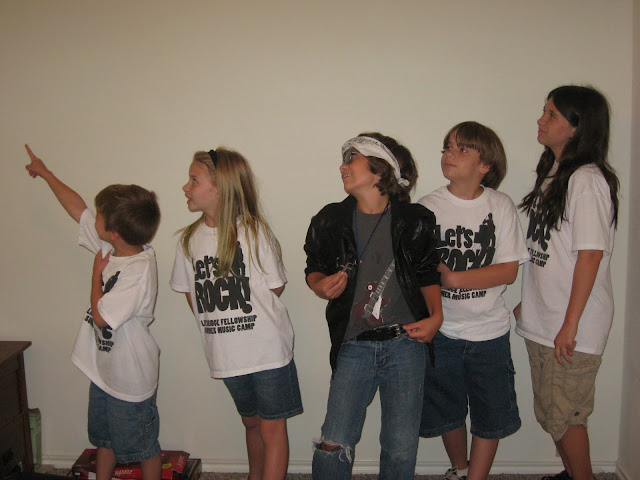 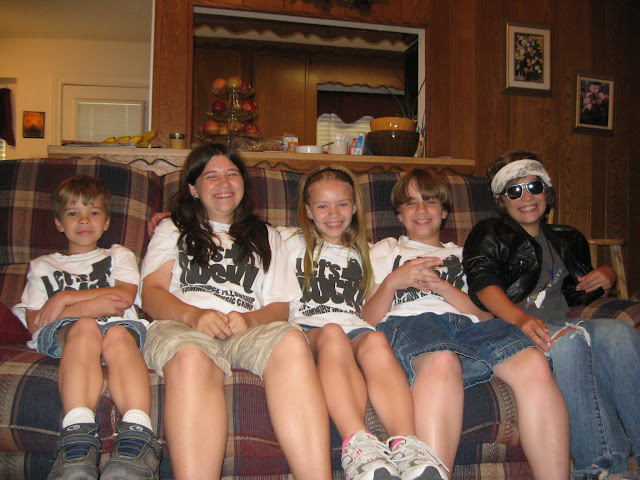 {You have no idea how rare it is to get a picture of Kerry's kids ~ much less one of them [mostly] smiling! I don't know how they managed this!}

Then there's this one with Chase smiling! 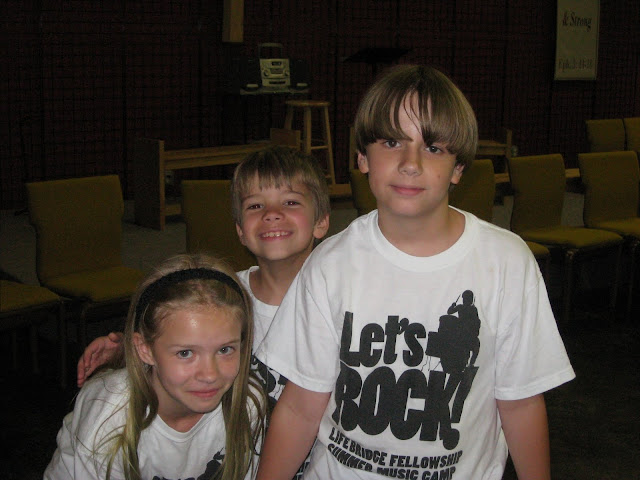 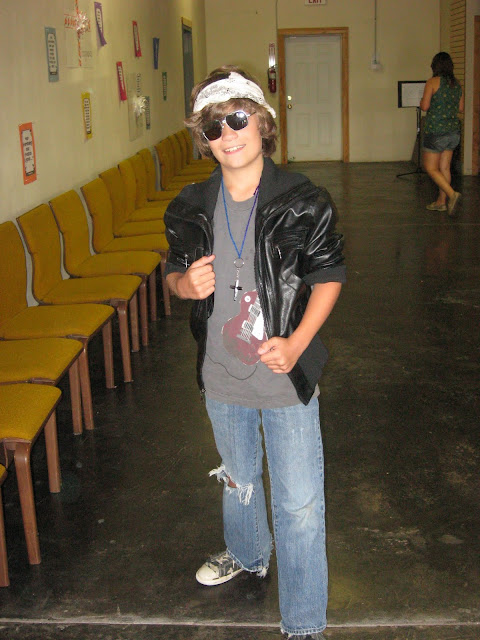 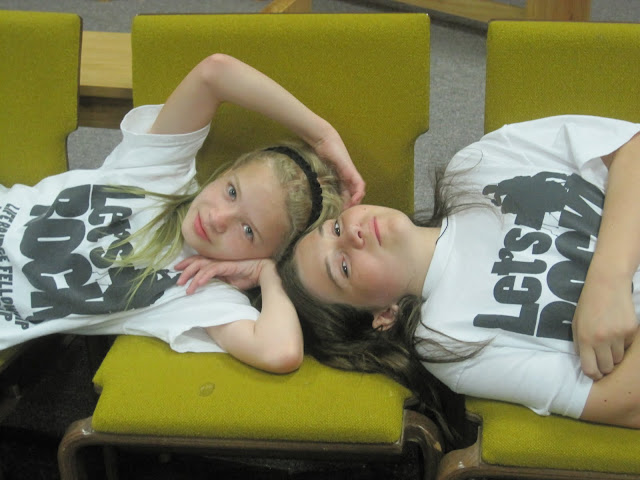 & the boys {I know this isn't the best picture ~ but it really is next to impossible to get one of Chase. This is a music camp miracle, so I just have to post all of them that I can! This seriously may never happen again!} 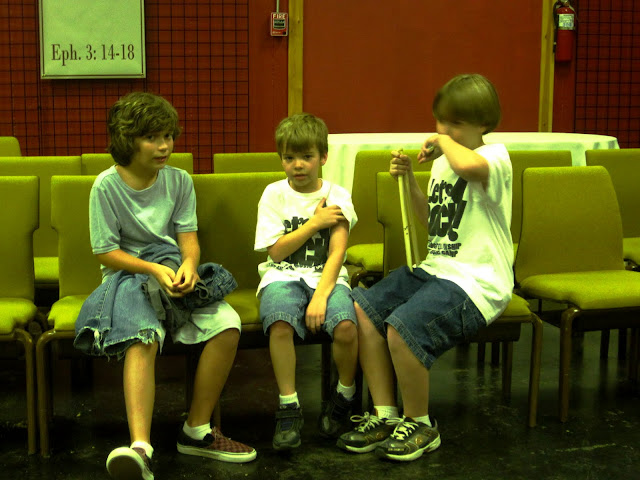 On a completely different note, Zumiez uploaded the photo booth pictures from Saturday...so go check them out if you haven't seen them already! :)

Brooke said…
glad it was a quick recovery for all! couldn't help but chuckle at the way you blocked out everyone else's faces :P
June 21, 2011 at 9:52 AM

Amanda said…
Is Cody really at the age where he is "appalled" by something his mother would do??????

I went back and looked to see how you blocked out everyone's faces! SO FUNNY!!!

Zion said…
22 of 40 were sick! Wow, that's bad. Oh, and I love the little smiley faces that you have. I will say though, we do pictures called around town for the magazine and I was told that if it was something from the community that we don't need parental consent. I don't totally understand, but legally when I go out to photograph some kids for an article I have to have a form for minors, but for the Around Towns if they are at the park, or shopping, or whatever else we don't have anyone sign anything. But, I guess it's better to be safe than sorry.
June 23, 2011 at 1:45 PM