This week has been really good! It started off with a day of babysitting my friend's two sweet little boys! I worked a little bit, had lunch with a lady from church (to talk about a Fall Bible study ~ more on that later!), took the kids to the pool, played games with the youth group at the park, took the kids to the beach & helped with some VBS stuff at the church. Yesterday, Elly & I went to see Soul Surfer with my fried Angela & two of her daughters. Last night, the kids both spent the night at friends' houses, so Christopher & I went out for coffee! Then I made him watch Life As We Know It with me {which, for the record, has to be way better than the movie he wants us to see when it comes out!}

This morning, I had hoped to sleep in. I even got this cute sleep eye mask: 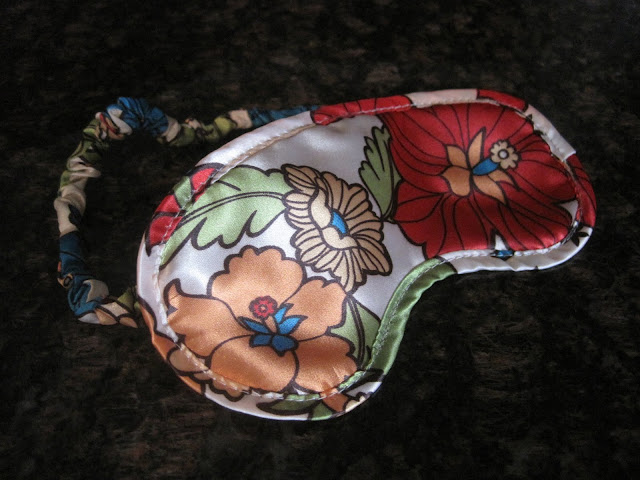 I was thinking that maybe I could sleep later if I didn't realize that the sun was out. Unfortunately, Pepper is well aware of the time of day...By around 6:15 each morning, she scratches on my side of the bed for me to pick her up & put her in bed with me. She'll get under the covers & snuggle up against me, but she doesn't stay there for long. She's super restless & jumps down, only to want back up a few minutes later. She's a spoiled brat, and I don't know what to do with her! The thing is that if she really tries, she actually can jump up there. So I shouldn't have to pick her up at all! I've tried to ignore her, but she just keeps scratching. Do you think they make sleep eye masks for dogs?

Anyways, I ended up with an entire day without kids today. Since I was awake before 7, I was able to spend time with the Lord & ride about 7-8 miles on my bike. I know I just complained about not sleeping in, but I really do prefer to do both of those things outside before it gets too hot. I also got to plan some scrapbook pages for next week! The kids are going to my brother's for the week, so I'm going to Jana's parents with her & her kids. I'm also planning a meet-up with RRMama!!! I'm SO excited to meet her! :)

As for the song...Tricia Brock (from Superchick) released a new worship album this week, and I've really been enjoying it! I already knew today's song, so I think I listened to it more than the others because I could sing along with it. It's good stuff, though! I don't have just one favorite line, so I'll leave you with a big chunk of the song!

I'm off to see my baby brother! I hope y'all have a super great weekend!!

Brooke said…
what'd you think about the movie? i went to see it with jay and my parents. i thought it was pretty good.

Zion said…
Okay I have lots to comment on 1. I heard about Life As We Know It because several people told me about the giant cupcake back when I did Sedona's party. 2. I don't know if you know Chelsey Rhine (she was one of Kristen Rose's bridesmaids and I photographed her wedding) I just found out through their blog (which is on my blog roll by the way) that her husband has cancer :( I was so bummed, but it looks like it's low risk, so that is good.
3. You calling Pepper a brat made me laugh
4. Have fun meeting a blog person live, I have always wanted to do that :)
June 12, 2011 at 12:58 AM

RR Mama said…
I can't wait to meet up!! SO EXCITED! I had to put that first, I know what you mean about the dog. Cookie will climb in our bed and want under the covers. She has her own cover on our bed but always wants under ours.
June 13, 2011 at 3:36 PM