"There Was An Old Lady"

I have all sorts of stories to share, but I'm exhausted. So exhausted, in fact, that I chose to sleep an extra hour instead of getting up in time to fix my hair before church this morning! My hair was curled up all crazy from the wedding yesterday, so I put it in a ponytail & wore it to church that way. For the record, I've never done that. I could've slept in & not gone to church, but those girls are more important than sleep. Hair isn't, though. And you should be proud of me, because I feel like I've come a long way...

My stories from Julie's wedding trip will also have to wait because I have a little camera situation & don't want to post about things without the pictures to go with them. But maybe I can compose my thoughts enough to tell you the story about my broken camera...

Elly & I had gotten home from something, and I noticed a weed in my flower bed. While pulling it out of the ground, I got eaten up by fire ants. After I got them off my feet & shoes, I realized that a couple had made their way to my shorts. Yep, my shorts. So I ran into the garage & shut the door real quick so I could take them off & get rid of the ants. {ftr, Elly was laughing at me the whole time, even though I was being eaten alive! I told her that I hoped Poppy didn't come home while my shorts were off, & she said that it was OK since he's my dad. I suppose that's true in some regards, but I was also concerned about the neighbors who might be going by when/if the garage door was opened during my little ordeal!} After treating the ant mound with some stuff I had in the garage, I went inside to treat my wounds. A little while later, Dad came inside carrying my purse. He had run over it when he pulled into the garage {he's color blind, so it blended in with the concrete} & was afraid it was the cat, at first!

Ya, so I could've just told you that my camera broke when my dad ran over my bag, but y'all might wonder why I used so few words, huh? Anyways, when Dad handed me my purse, I checked to see if my phone was alright {it was} but couldn't think of anything else that would've broken. Sadly, I've been discovering broken things all week, but I haven't told Dad because I don't want him to feel bad about it. My lip gloss & Chapstick are OK, in case you were concerned. But my mirror & brush didn't survive the accident. And when I turned on my camera to use for our tacky ladies night, this is what I discovered: 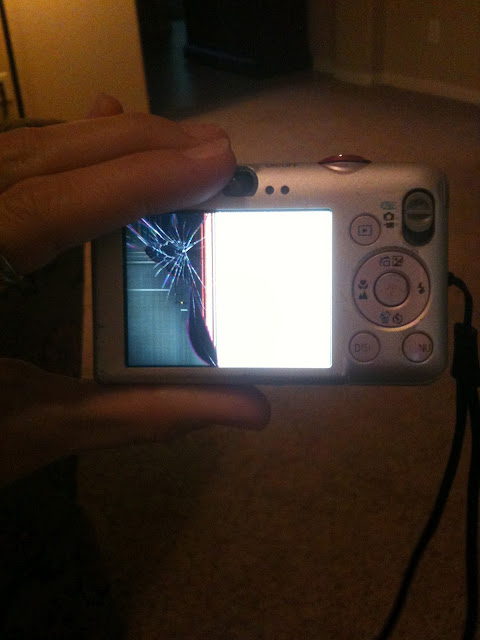 I took some pictures anyways, just to see how they turned out. Then, when we got into my van for our ladies night adventure, Hannah found a disposable camera in it! And since I'm totally dragging this story out way longer than I had intended, I'll go ahead & tell you that Nicole had an extra digital camera that my team used for the photo scavenger hunt. Halfway through the hunt, we realized that it didn't have a memory card, though. I ran to my van to get the memory card from my broken camera, and when I put it in Nicole's camera I found out that mine had actually worked when I took the pictures earlier in the evening! I can't adjust the manual settings, but I can use it in the auto mode. Anyways, once I use up the disposable camera & get it developed, I'll see if I have any blogworthy pictures to share along with my adventures with Jana & Julie's family over the past few days!

On a completely random note...I have a little MISplacement story, but it isn't worth an entire MISseries post...As I pulled up to the mailbox one day, I realized that I my mail key was missing. It has a safe little place in my van console, but it wasn't there. I have an extra one on my key ring, but I don't generally prefer to use it since it involves turning my van off (only to turn it back on a few seconds later). As it turns out, I didn't have to use my spare key after all. When I stopped at the mailbox, I discovered my key right there waiting for me: 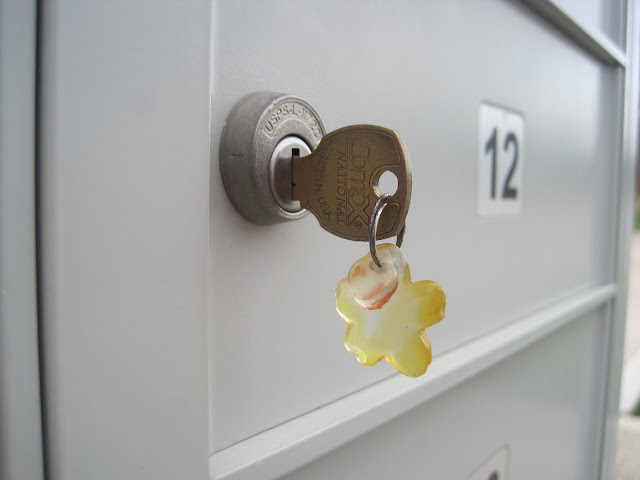 Alrighty, y'all are probably wanting to beg my family to take the computer away when I'm tired, huh? Sorry if this was all over the place, but I wanted to let y'all know that I'm back home & hope to catch up with your blogs soon! ♥

Laura said…
Oh my gosh, I am so sorry about the fire ant ordeal and your camera getting run over! :-( I'm glad you had a fun wedding weekend with Jana and Julie's family and I can't wait to catch up in person sometime soon. :)
July 22, 2012 at 10:33 PM

Brooke said…
sorry about the camera! jay is color blind too. for the longest time he thought our deep turquoise bedroom was gun metal! i guess that's why he lets me paint the house any color i want!!
July 23, 2012 at 1:21 PM

Zion said…
AHHHH! Fire ants are the worst and that is unbelievable about your camera. It could have been worse I guess, but that still stinks.
July 25, 2012 at 10:42 PM