Several exciting things happened this week! First of all, Christopher started out the week in Washington DC. The headquarters for the Melanoma Research Foundation (MRF) is in DC, & Chris went there to train for a new Buddy Program that the MRF is starting. Through the program, a newly diagnosed Ocular Melanoma patient will be assigned to him for support and encouragement. It would've been wonderful to have something like this when Chris was first diagnosed. Because OM is so rare, there aren't any local support groups or anything like that. It took awhile to find an OM survivor, and it was a very stressful time (for many obvious reasons)! Within a few weeks of his diagnosis, I came in contact with a lady named Sara whose husband also has OM. It was helpful to communicate with someone who was a little farther down the road than I was. There are now several facebook groups and better search engine optimization for the sites with solid facts. Even with an incredible online community, it would still be nice to actually talk to another patient. We've never actually talked to one, but Chris has talked to a few relatives (including Sara & her sister) and met the daughter of an OM patient who passed away. There are two other patients in the Houston area (that we know about), and I have plans to meet one of them for coffee one of these days!

Anyways, in addition to the Buddy Program {and even more exciting!} is a new OM initiative (CURE OM) that is being launched by the MRF on Monday! The MRF is the largest independent organization in the US devoted to melanoma. Up until now it has exclusively dealt with cutaneous melanoma, but it will now be taking on Ocular Melanoma! We are all very excited to know that more research will be done to find effective treatment (& ultimately, a cure) for OM!

On to other events of the week...Scavengerween was Wednesday night! I'll post more about it later, but just know that Nicole, Julie, & I had the most amazing team costume!! If we're fb friends {& you haven't hidden me due to all of the pics my mom has been tagging me in and clogging up your feed!} you may have already seen pictures. Otherwise, I plan on posting about it on Monday!

I got to hang out with my friends Heather, Kristi, & Jana (and their kiddos) on Thursday! I don't remember if I've mentioned my friend Heather before (other than in my "Friends' Theme Songs: Scrapbook Friends Edition"), but her family moved to Costa Rica to become missionaries a couple of years ago. They're in the States for a little while, and Kristi invited us over for a play date! It was so good to really catch up with her! When they've visited before, I've only seen her at church. There are always a lot of people who want to talk to them, so our conversation is usually brief. We stay in touch through facebook and email, but it's just not the same as face-to-face girl talk!

Speaking of girl talk, I have to tell y'all about the super great deals I got yesterday! I don't know if you remember when I got some good deals during Old Navy's "Stuff & Save" event last year, but I think I did even better this time! Cody needed jeans, because I've learned not to buy him any at the beginning of the school year. He won't wear them until it drops to 40 degrees. {Several years ago, I made the mistake of buying 5 or 6 pairs of jeans for him at the beginning of the school year. Then he wore nothing but shorts until it got cold. And had outgrown the jeans before he ever got a chance to wear them! The only good thing about it was that I have a nephew who is younger/smaller than Cody, so he got some brand new jeans!} Anyways, it got cold Thursday night, so Cody wore the one pair of jeans without holes in the knees to school on Friday. And on Friday only, I got 40% off everything I could fit in Old Navy's "Stuff & Save" bag. Plus, their clearance items were anywhere from 30-50% off the marked down price, & I had some reward bucks that I was able to redeem toward my purchase, too! So Cody got 6 pairs of jeans for about $7.35 each, and I got a bunch of shirts ranging from $.98 to $2.82 each! :) Granted, some of them were tank tops & others were long-sleeved U-necks, but I still think I got a pretty good deal! 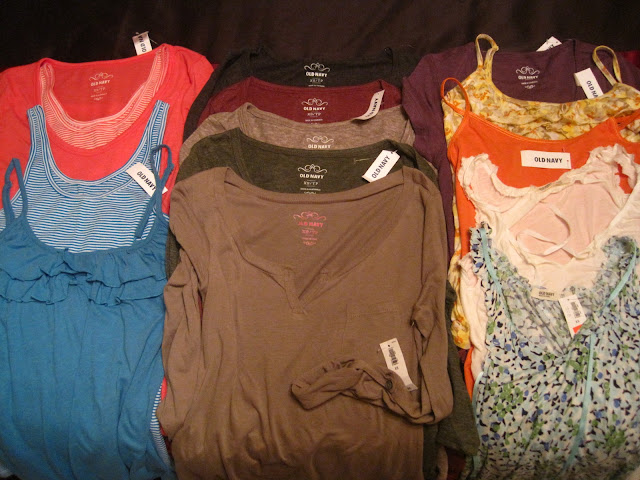 Check out the length of my receipt: 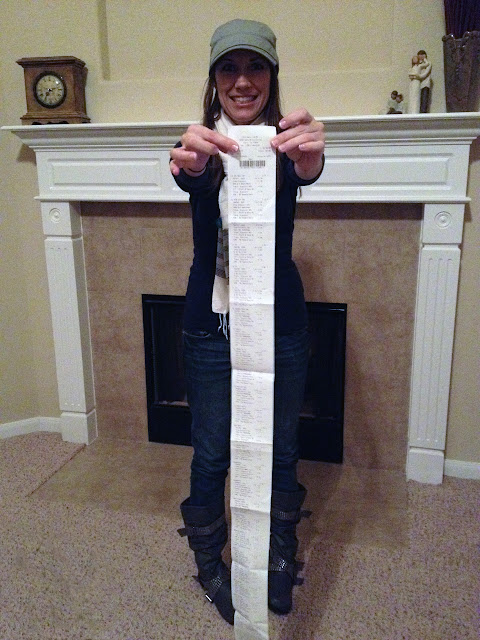 That picture's a little deceiving. Here's one with a more accurate perspective... 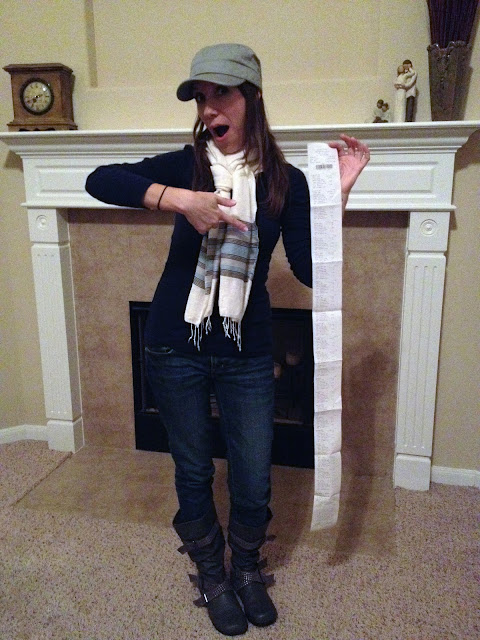 On to way more exciting things than good deals & empty niches...My dad & I got to spend all day with my brother today! It was Alpha/Holy Spirit Day, which is hosted by the same people who facilitate the Thursday night Bible studies. When the Alpha Course is done in the free world, they devote an entire weekend to lessons about the Holy Spirit. They're only allowed one day in the prison course, & my brother's unit is the only prison in the United States that allows family members to be a part of it! There were a lot more family members than on Thursday nights, and it was really great to meet them! This may seem crazy, but these men are becoming like family. So it's really neat to get a chance to meet more of the people that are special to them. Other than the usual Thursday night stuff (worship, Bible study lessons, & small group), there were songs, poems, & skits performed by a lot of the inmates & their family. Dad & I sang today's song {hence the reason it was listened to the most this week ~ I had heard it before but didn't really know it, so I had to learn it before I sang it in front of 200 or so people!} and my brother surprised us by rapping to a Christian remake of "No Ordinary Love" with his friends Sly & Trey. It was super cool!

Alrighty, I'm going to try to get to sleep soon! I hope y'all are having a super great weekend!!

Zion said…
Oh my goodness. I can't believe that story of Cody outgrowing his jeans :( I think that is the longest receipt I have I have ever seen! I saw your facebook picture of the costumes and I can't wait to hear more!
October 29, 2011 at 10:21 PM