I'm sorry I haven't posted much this week. There really hasn't been anything worth blogging about. I'm sure you didn't really want to hear all about laundry, grocery shopping & taking my friend to her doctor's appointments! Tuesday night was National Night Out. This was our third year to host it (along with our super great neighbors, Ryan & Kristi), but this was the first year that firefighters stopped by in a fire truck: 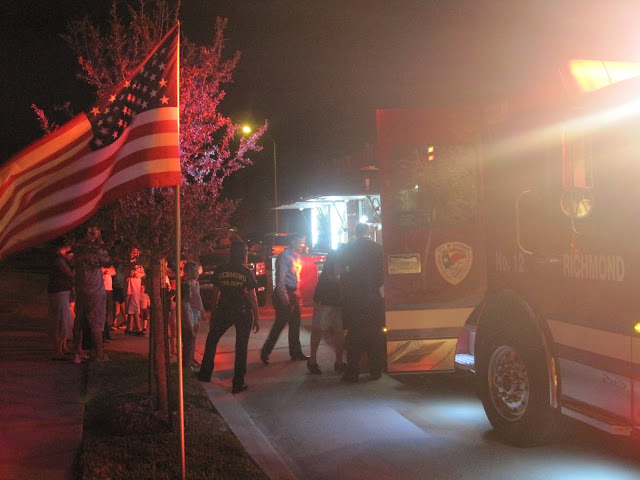 {the little kids & a few of the big kids loved it!}

As for the rest of my week, I have a couple of stories to share...

If I were the type of person to be easily offended, there were two possibilities at Bible study with my baby brother on Thursday night. I actually thought they were kinda funny, though. The facilitator of our small group is an interesting man who I could write an entire blog post about {complete with vlogs demonstrating his little quirks ~ but I'll refrain because I'm nice like that!} Anyways, he was about to use me in an illustration, then he changed his mind & said that I wasn't old enough to know about kids. I said (a little indignantly), "I have kids!" After small group was over, my brother teased me about not being old enough to have kids. The guy next to him asked me about my kids, and then he asked me how old I am. When I told him that I'm 36, he said, "Well you're on up there!" Aaron elbowed me & laughed. Then he told James that he should never ask a woman how old she is, and he should definitely never tell her that she's on up there! James then explained that all he meant was that I was old enough to have kids! :D

I was on my way to a crop at Felicity's last night when I heard a little warning bell go off in my van. The temperature gauge was almost all the way to "H", but I had only been driving for about two minutes. I called Felicity's house, hoping her husband Wheeler would answer. He knows a lot about cars, so I was wanting his advice on whether I needed to pull over right away or head up to their house so he could look at it. Nobody answered, so I decided I was better safe than sorry. I headed toward the nearest parking lot to let it cool down. Silvie's little warning system apparently had no idea that the little road behind Kroger is only two lanes (with no shoulder & a steep drop off). Either that or since I hadn't responded to the initial little ding, it felt the need to repeat it incessantly. {Strange little fact: right when my van was dinging so impatiently, The Reliques were singing, "Mama warned me there'd be days like this..." ü}

Because I'm good at making stories way longer than they really need to be, I'll continue...

So I got to a parking space & tried to call Christopher, but he works in a dungeon two miles underground with no cell phone service. {Not really, but he doesn't have a signal inside his building. Or so he says.} So I called Wheeler's cell ~ partly so he could let Felicity know I'd be late, and partly for his car wisdom! He said that I had done the right thing & told me a few possible reasons for my problem. Then I called Chris again & was actually able to get ahold of him! He was just leaving work, so he told me to sit there & let the van cool down until he could get there. So I did the only thing I could do: went to the Starbucks inside Kroger while I waited to be rescued. :) To make a long story slightly less long, I was completely out of coolant. Chris filled it up, and we took it to the shop outside our neighborhood so they could figure out why it all leaked out. I dropped Chris off at the house & was only an hour late to the crop. {I'm sure you were concerned about me missing the crop, huh?} And now Silvie is the proud owner of a new radiator!

Today we got to see Dave Ramsey at Total Money Makeover Live! We went with our friends Bob {respect the 'stache} & Beth (& their girls). It was a great day, even if we did have to pay $4.25 for a bottle of water! He didn't really discuss anything that we hadn't already learned in FPU, but it was a good little refresher course. It was cool to see him in person. And I sorta got choked up at the end when he talked about Jesus. ♥ 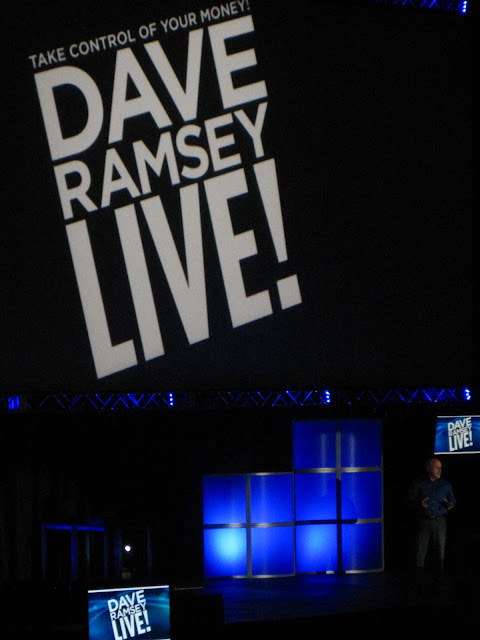 As for today's song, I think it may be my favorite one from the new NTB album {at least for today!} When it first came out, I mentioned how this song is a challenge to let go so you can really live. There's more to it than that, but I'll let you listen to it and see what it means to you :) This is my favorite part:

Alrighty, I guess that's all for now! I hope you're having a super great weekend!!

Zion said…
Ha ha, you crack you up with your long story comments. That's cool that you got to see Dave. My parents have met him and I think it would be neat to see him live.
October 9, 2011 at 7:52 PM