Yesterday was my birthday, and I had planned on posting pictures from my various celebrations. I still have one today, though, so I decided y'all wouldn't mind if I waited one more day. Instead, we're going to talk baseball...

I've been lamenting yet another decision made by my beloved Astros. They traded my favorite player, Chris Johnson, on Sunday. :/ They got two minor league players as a result, and maybe the team will be good in a few years. But I was a little bit frustrated about the trade. And my mister was a little bit amused by my frustration. So he videoed my little rant...


There are a few things that I didn't rant about in this particular video...but mainly: I just don't like change. And there has been a lot of change with my 'Stros lately! They had just traded Wandy. And though I don't think anyone was very upset about Lee, he was at least a familiar face out there! I felt like Johnson had proved himself with the club over the past three or four years, but apparently they don't want to keep guys around long enough to give them a chance. At this point, our oldest "veteran" player has only been with the club for like three years. I miss the days of Biggio & others who were kept around for awhile. I'm sorta seeing this as a strange trend, like the Phillies trading Pence for a couple of prospects?? Seriously?! Anyways, they're saying that rebuilding is a good thing. But right now, I'm not liking it! I know we shouldn't neglect the whole farm system. But if they perpetually rebuild, how can they ever get a good team?

The good news is the fact that I've found a new favorite baseball player in the minor leagues...

On Monday night, we went to the Skeeters game! The Sugar Land Skeeters are a new minor league baseball team in our area, and they have a brand new stadium not too far away. We had planned the outing as a Community Group, but only our family & Jana's were able to make it. Of course, I ran into several other families that I know. A couple of them are local, but I was quite surprised to look up and see my sister-in-law's sister's family there! {Sorry if that was confusing. Would it have been better if I said my brother's sister-in-law's family? It can be even more confusing when we're talking about her, because she has the same name as my brother. They spell it differently, though, so if I had typed it out it wouldn't be as confusing as speaking it. Wendy refers to her as "Sister Carrie", so people will know she's not talking about Kerry. We occasionally call him "Husband Kerry" when Carrie's around, because it sounds funny!}

Anyways, back to my new favorite player...I must admit that I picked him solely based on his song (which is the one I posted today). As soon as I heard the second or third clap (causing me to realize what song it was), I declared Matt Hagen my favorite! When he made a great play later in the game (a double that brought a guy home), I said, "Do I know how to pick 'em or what?!"

To which Jana replied, "Pick 'em to be traded!" ü

In his case, that could mean getting traded up to the big leagues. That wouldn't be so bad! {You can thank me later, Matt!} ;) Anyways, after the great play, I felt the need to explain to my dad (who was also at the game, but on the other side of the field) that Hagen was my favorite before he played well. Here's our dialogue: 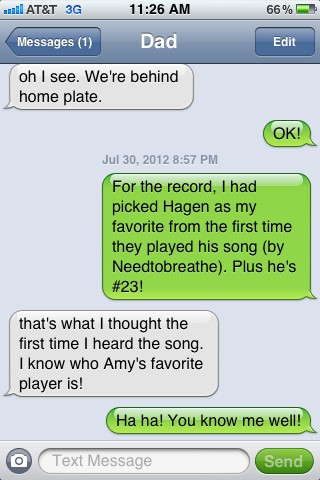 In case you're wondering about the #23, that was Chris Johnson's # when he was with the Astros. And for the record, he hit a GRAND SLAM in his first game with the Diamondbacks! Just sayin'.

Alrighty, I guess that's all for today! I hope y'all have a good one!

RR Mama said…
I was not happy about Wandy or Chris being traded. I'm hoping the new owner finds some great players and bring our beloved 'Stros back to the days of the Killer B's.
August 1, 2012 at 9:28 AM