This week has gone by so s-l-o-w-l-y...That's normally a good thing, because I like to enjoy life & not let it pass by too quickly. But blah blah blah. We're almost there, though...

To help pass the time at appointments & such this week, I took up a new hobby! I am now officially a knitter. OK, well I wouldn't quite call myself a knitter yet, but I'm learning. I'm working on a scarf, and I've started over twice. Don't look too closely, but here's what I've accomplished so far: 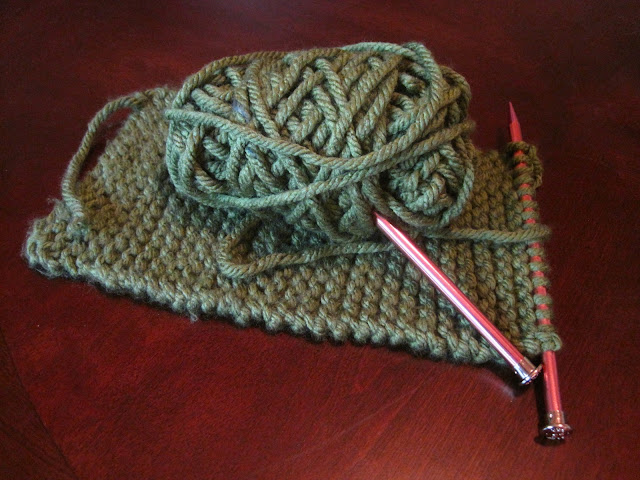 Bible study has started up with my baby brother, so it was nice to see the guys in his small group again. It was so neat to see the passion in one guy as he talked about God calling him to minister to the guys he used to be in gangs with. He is spending a lot of time in the Word while he's locked up, & he asks some really deep questions as a result of that time. It's pretty cool! A funny thing happened when I was signing in...I wrote my maiden name. What?! I don't know if it's because of the facilitator (who refers to me as "Little [maiden name]") or what. You'd think after 15 years of not going by it that I wouldn't accidentally write it, huh? Can I use Christopher's excuse & blame it on the radiation?! I don't know if I've told you how protective Aaron is of me when I'm there, but it's so cute! He may be twice my size, but he's still my baby brother. So to see him be all "big brotherly" makes me smile! :)

The Spring semester of MOPS started again yesterday! I enjoyed catching up with the ladies at my table. We also had a new member at our table yesterday, & she happens to be a neighbor of mine! {& crazy thing, Amanda: she used to be YOUR neighbor!}

My girl Misty {who just so happens to get phone calls from outer space!*} came over last night with her fiancé! Rob got The Settlers of Catan for Christmas. I've been hearing a lot about the game, but this was my first time to play it. I don't quite understand it, but I somehow won. 'Cuz I'm awesome like that. {*As for the whole "phone calls from space" thing, I'm 100% for real. She's a flight controller for NASA, & one of the astronauts actually called her cell phone from the ISS one night. If that's not super cool, I don't know what is!}

I'm singing today's song with my dad tomorrow (in English & a lower key, ftr), which is why I've listened to it the most. I didn't really know it before, though I've heard it a few times through the years. Wish me luck... ;)

Okey doke, I'm off to see Aaron! I hope y'all have a super great weekend!! ♥

Amanda said…
OK, now you have me intrigued....do tell! Who is it? Our families seem to run in the same circles! Remember when Jeremiah brought Jessica to church with him? Her and I kept looking at each other strange until we realized that I had met her years previous while working at the Buckle with her ex. Small world! Glad to hear everything's going well for you! Miss you guys!
January 14, 2012 at 9:32 PM