I'm sorry to be late once again! I know, I know...I'm beginning to sound like a broken record...I had three different things yesterday & was home for maybe 20 minutes between each thing. They were fun things, though, so I'm not complaining! I went to a crop in the morning (& got 11 pages done!), a baby shower in the afternoon, & a birthday party in the evening. We got to see a lot of great people that we really don't see often enough!

Alrighty, now for the random events of my week...

First I'll give you a little update on Mr Christopher...he saw three different doctors this week. Fortunately, they were all in the same building on the same day. Unfortunately, there were three separate co-pays. :/ First we saw Dr B, and he felt like things looked fine except for the cataract. We've been talking about this cataract for nearly a year & 1/2 now, and it seems as if both doctors agree that it's time to do something about it. You may remember that Dr B seemed concerned about Dr C removing the cataract when he does the other surgery. I'm not even positive that Dr C was actually planning on doing it himself, but it doesn't really matter now anyways. Because we've now added a new doctor to our list: Dr Hamill, a cataract specialist. After Dr B's examination, he had Dr H come in to look at Christopher's eye, and Dr H asked us to come back & see him after the appointment upstairs with Dr C. There's a slight possibility that his peripheral vision could be improved by replacing the lens, but at the very least they'll be able to see into his eye better.

Dr C said that there is no new radiation damage (since July)! We told him about Dr H removing the cataract, and he made sure that we're aware that his central vision will most likely not improve. His main concern about the surgery is that it can increase the pressure & cause those crazy vessels at the front of his eye. But he didn't advise against it, and I think he'd like to be able to see & treat the retina easier in the future.

Soooo...we went back downstairs to Dr H & paid a specialist co-pay for him to simply look in Christopher's eye (as he had already done in Dr B's office) & recommend that we have cataract surgery (again, as he had already done in Dr B's office). He did add that when we go in for the pre-op visit, he wants us to be armed with any questions. And he likes patients with lists. {Seriously, while that little statement did make my heart do a little flip, I don't think it was worth the $35 co-pay!} Anyways, he basically reiterated what Dr C said when he first mentioned the ease & relative safety of cataract surgery {though he didn't call it a picnic!} & sent us on our way. The surgery is scheduled for January 11th, which is six days after scans. So if we don't meet our deductible the first week of the year, we'll definitely meet it the second. We're good at that...

On to other things...

So I shocked my son this week. We were discussing accountability, and I gave an example of a time in my life when I needed accountability. I had a little cussing problem as a young teenager, and my friend Misty & I decided that we needed to help each other to stop this habit. We both loved Jesus, and we knew that cussing wasn't a good example of Jesus to our friends. So we decided to punch each other every time we heard each other cuss. I don't think that's really the accountability that most people have in mind, but it worked for us! ;) Anyways, I told the kids about it during our Bible reading before bed the other night. As I was walking in to Cody's room to tuck him in, he said, "I can't believe you used to cuss! Like, what did you say?"

OK, this is incredibly random, but surely you've come to expect that by now...I was doing laundry the other day & came across the following: 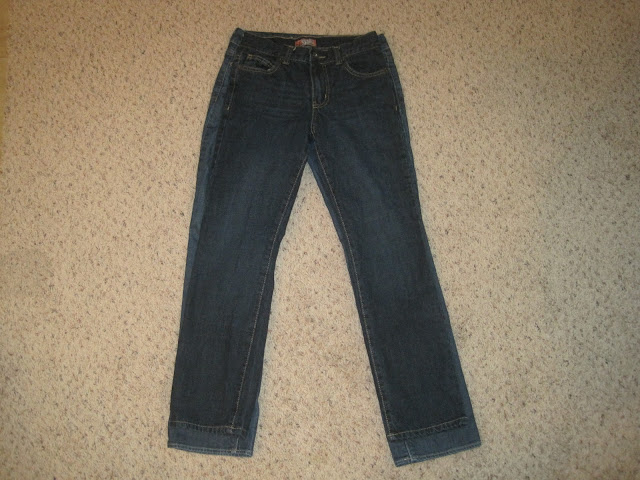 Those are Cody's jeans on top of mine. I can't believe how much he has grown! He's almost my size now, which is craziness because he's supposed to still be a baby! How did this happen?! I remember when I accidentally put Elizabeth's jeans in my stack, and that was crazy enough! But now it's my baby boy whose jeans are nearly the same size as mine. I know he'll be taller than me before I know it, and I'm just not ready for that!

Speaking of my boy, I have to brag on him for a minute...The awards ceremony for the Science Olympiad was Friday morning. Out of the entire district (20 schools and at least two teams from each school) Cody & his teammate won 1st place in Pond Study & 4th place in Ready, Aim, Fire! His school also won a grant that allows the Science Club students to go on an extra field trip to a museum (we both forgot which one) later in the year. Here's my sweet boy with his medals: 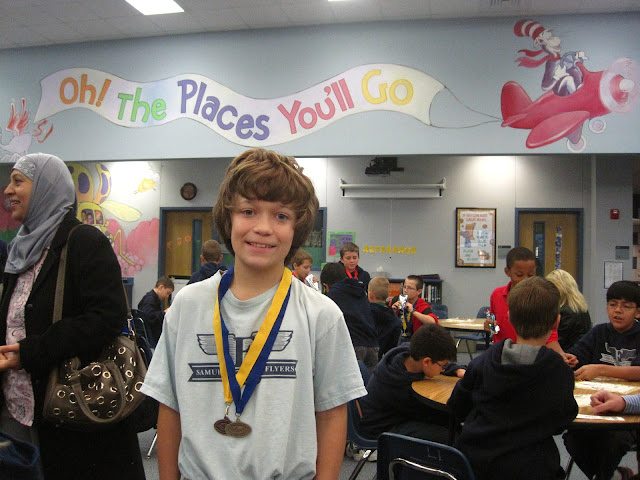 As for today's song...Like I told you last week, I've been listening to worship music a lot. It really helps me keep my focus. So unless I have new tunes to listen to, I've found it very helpful to keep my iPod on my playlist entitled "My Distraction". {What's kinda funny is that my counselor asked me once if I had any distractions that I use to deal with anxious thoughts & such. I sorta laughed & said, "It's funny you should ask that..." & told him the title of my worship playlist. For the record, he said it's a healthy distraction!} I named the playlist after today's song by our friend Blake, who coincidentally I got to see yesterday! {They were the ones who had the baby shower! Ü} Anyways, my favorite part of the song is the first part of the chorus:
Be my distraction
My satisfaction
Oh Lord, come and fill me
and the part where he says, "Break through the noise, Jesus, come capture me."

Jonathan Brooks said…
Amy,
Enjoyed browsing your blog. Random, but I was searching for "My Distraction" online to use for a sermon illustration this Sunday (can't seem to find my Received CD anywhere!). I stumbled across your post. I wrote the lyrics to the song in the spring of 07. Then, when I sat down with Blake, he hammered out the music in no time. Glad to know that it ministered to you guys! -Jonathan Brooks
June 22, 2012 at 1:04 PM