"Everything Is Different Now"

I had a good week despite the fact that I dropped my baby girl off at PreTeen camp on Tuesday. I meant to take some pictures of the various things we did this week, but I didn't do very well! {I'm sorry!} I started a very part-time job for my friend's husband who owns an adjusting company. I should be going in for a couple of days next week, too. I like it because it's the same type of work that I did for the flood adjuster after Hurricane Katrina. Plus, it gives me a little money for summer stuff! Cody & I went to the pool after work Tuesday night, then Jana picked Cody up on Wednesday & took him to the pool while I was working ~ what a blessing! Our friends Tucker & Cassie came over for dinner that night ~ & we enjoyed our time with them, as usual! Cody had a friend over on Thursday, then he did his little trick & it worked! [His little trick goes like this: the mom comes to pick up her son, & Cody gets into their vehicle. We act like we don't know where he is, & he hopes that we really don't know! His plan is that they'll drive off with him in their vehicle, so that he'll get to go home with them for awhile! It has never actually worked before, but this time the mom was all for him going home with them!] So, he went to his friend's house for a couple of hours, & I got my nails done! On Friday, my friend Laura came over from scones & coffee. Then, Amy & Alex came over to swim at our neighborhood pool all afternoon! Today, we picked Elly up from camp! She had a wonderful week & pretty much talked non-stop for the entire two hours it took to get home! I'm so glad to have her back!

This afternoon/evening, we went to Wally & Teresa's! I only took a couple of pictures of Ryco with Cody & Chris. I accidentally had it on the nighttime setting (which wasn't the best), so I snagged this pic from Wally's facebook! {It was taken the day of Ryco's dedication back in January.} 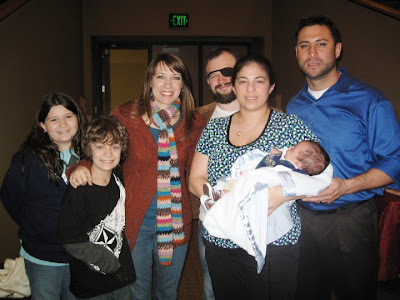 One last thing by way of an eye update: Thursday morning, my mister had another follow-up appointment with Dr C (the retina specialist who performed the vitrectomy & gave him the steroid shot). His vision is now 20/160, & he has a little cataract (something that we figured would happen sooner or later). At this point, Dr C isn't doing anything about the cataract. He explained that in normal people (& by normal, he means elderly people who tend to develop them naturally as they age), it takes about three years for a cataract to be a problem. In Christopher's case, if he has to have another steroid shot, the cataract will grow larger sooner (causing him to need cataract surgery sooner). So, that's what we're looking at. We'll know more at his next appointment in August. One thing that struck Chris & me as quite funny was that Dr C said, "Cataract surgery is like a picnic." Then he quickly said, "You should never refer to a surgery as a picnic." But we understood what he meant! Compared to everything else that my mister has endured (like having a plaque the size of a nickel in his eye for a week!), cataract surgery is nothing.

As for today's song ~> I don't know if it really counts, because I accidentally left my iPod on shuffle the entire time we were at Wally & Teresa's! But, I know for a fact that I listened to this song several times, because I love it! I got it in a free music sampler from INO Records awhile back, but somehow I really didn't notice it until this week. This is the title track to the Stellar Kart CD that came out in March, and I want it! {hint hint, Mister ~ your Mrs has a birthday next month!} The whole song is great, but my favorite part is this:
I'm not going back
To the way that it used to be
A sad sad song
That was yesterday
Everything is different now
You're the love I've finally found
Everything is different now
Because of You
I hope you're having a super great weekend!!