Today's random song choice is because I went to an Astros vs. Royals game on Saturday, and this song kept going through my mind. Yes, I'm weird...

Anyways, I'm late again and could explain that it was a busy weekend blah blah blah, but I'll just cut to the chase and tell you what I've been up to lately...

My dad asked me to pick his car up from the shop, then he let me drive it for a couple of days! :) He likes to prevent dings in his door by parking far away from other cars, so when the kids & I grabbed some dinner between the chiropractor and Maundy Thursday service, I parked in the lot of a business that had closed for the day. It was just on the other side of the drive-thru, but nobody else would want to park there. I wanted Dad to know that he had taught me well, so I sent him this picture of his "baby": 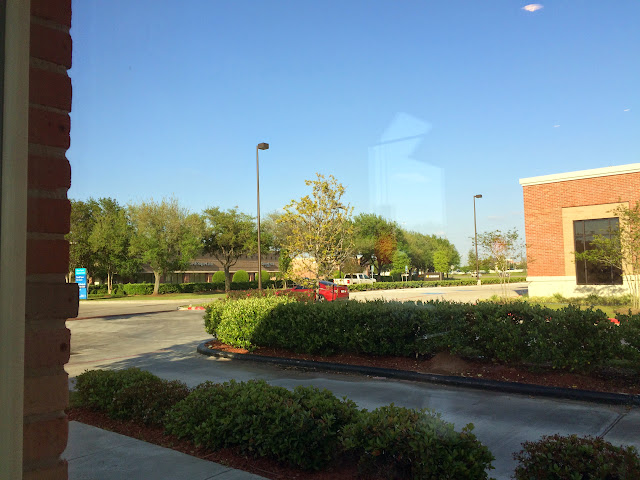 I tried to get a decent picture of my babies while we were there, because they were sitting next to each other and I thought they looked cute. They weren't the most cooperative, though... 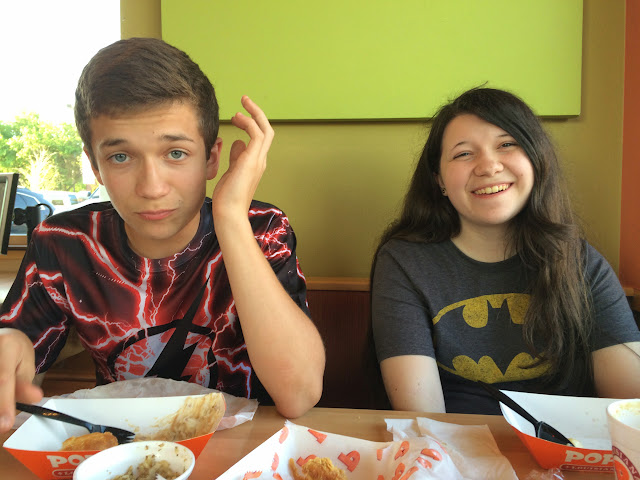 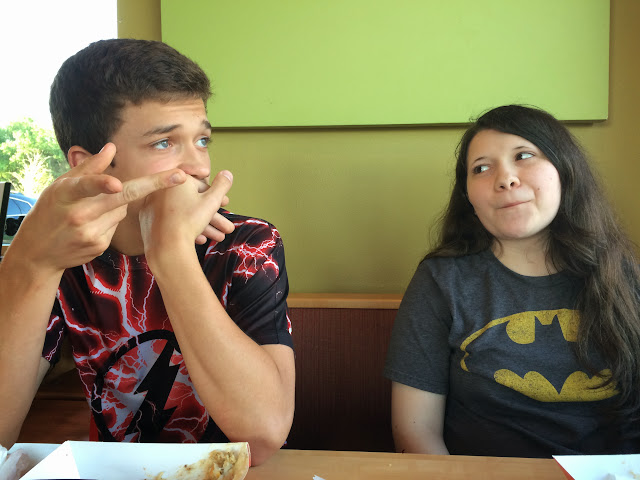 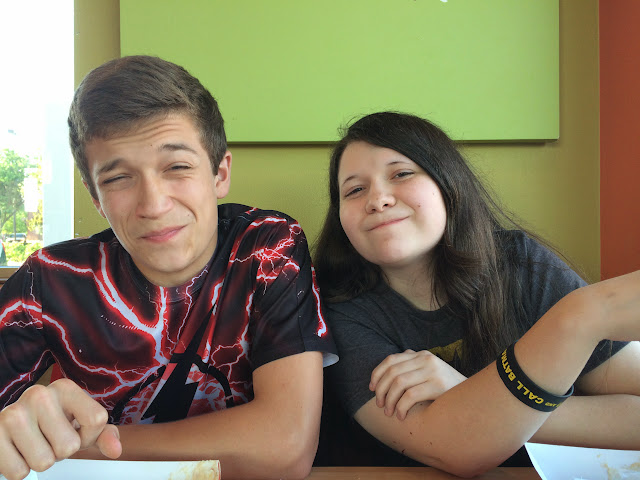 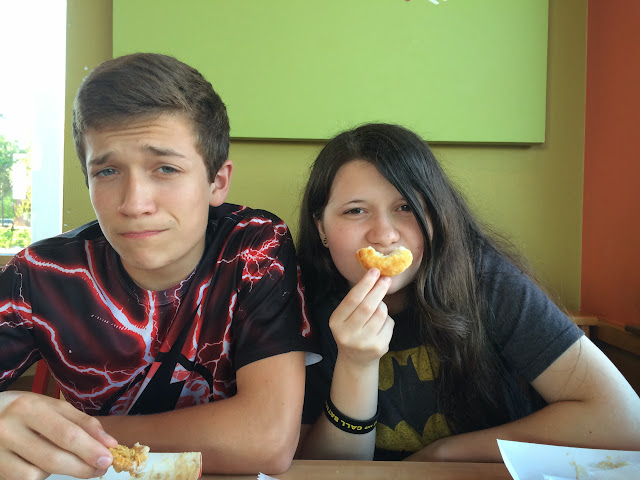 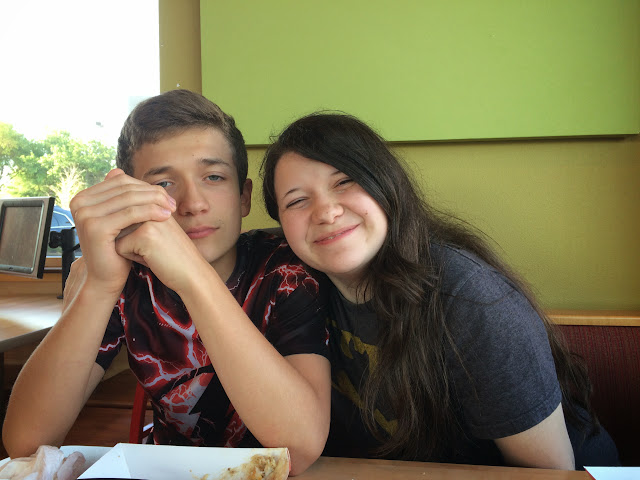 Crazy story...I'm 99% sure I was almost broadsided by a van earlier that day. I was at a red light coming out of the church parking lot, and Neil stopped to ask me something as he turned into the lot. My light turned green, but I hesitated as we wrapped up our conversation. Just as I was about to go, a van ran the red. Had I gone when I was supposed to go, I totally would've gotten hit. Crazy, huh?!

Moving on to happier stories...My step-mom treated me to a manicure and pedicure on Friday! Have you ever heard me say that before?! It's because I haven't. That just wasn't the sort of thing my former step-mom would've done with/for me {though she did take me to get my second piercings in my ears when I was 17, so that counts for something! ü} I don't know if I've mentioned that P-Dub never had children, so this was a first for her, too! It was a nice way to spend some of my afternoon.

Then after the Good Friday service that night, Sam invited Elly & me to The Cheesecake Factory with her and a couple of her kids. It was delicious, and I enjoyed spending time with her! 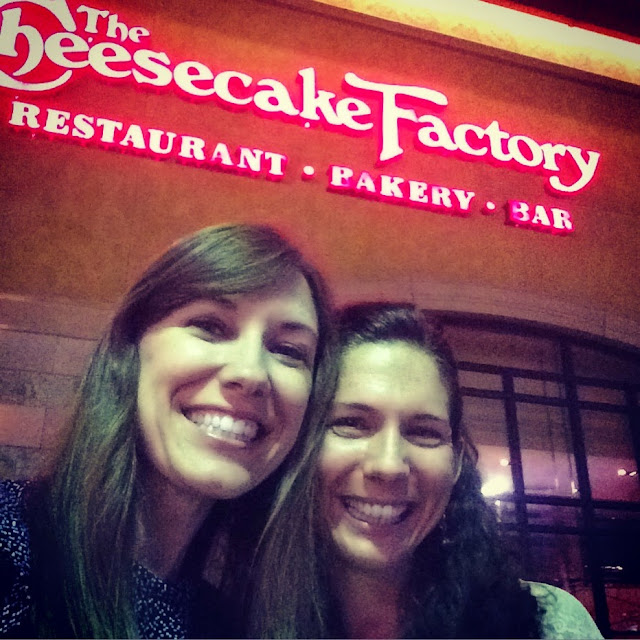 On Saturday, Laurien came over to bake cookies (some of which I gave to Neil because he "saved my life," as he likes to say)! Then we went to the Astros game with Dad & P-Dub! They lost, but it was a preseason game, so they played a lot of rookies and stuff. I haven't found a new favorite since the Chris Johnson situation a few years ago, so I was looking for a new one & hoping a new guy would impress me! Tucker had potential because I like his name & number (75), but it didn't happen. I'll keep y'all posted {though I'm sure only Jana & RR Mama even come close to caring about this!} 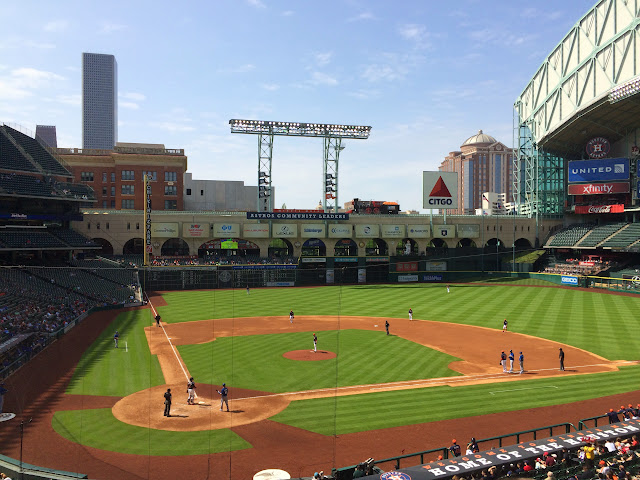 Before I forget, Kennan posted pictures from her baby shower last weekend! Here she is with all of us hostesses: 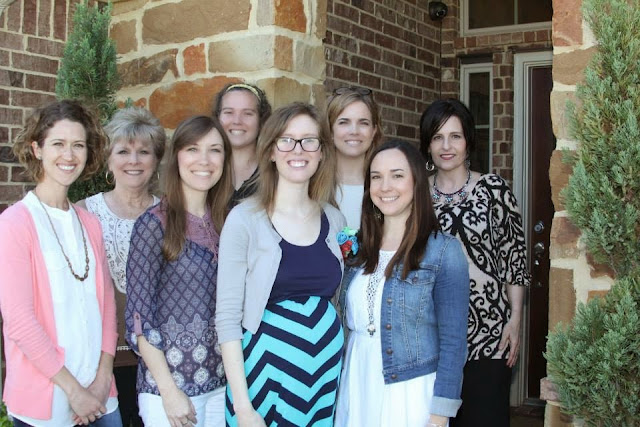 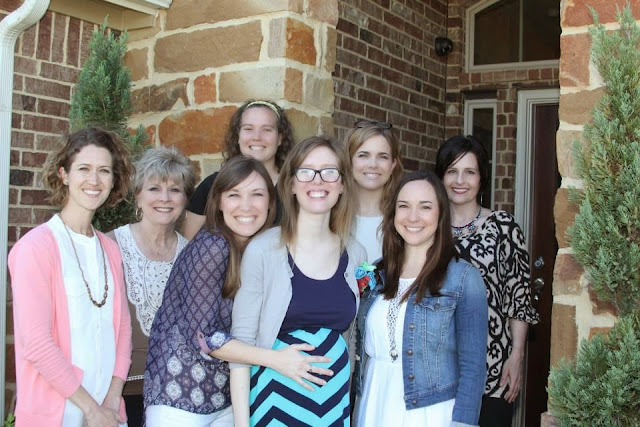 And since this week is nearly halfway gone and there's a Women's Retreat this weekend (which means I'll probably be late again), I'll just go ahead and fill you in on this week so far...

My family was invited to an Easter dessert bar at my friend Ashley's house!! {Dessert bar, y'all! Of course we were destined to be friends! ♥} We ate a bunch of assorted desserts and relaxed on the back patio while the kids swam and played basketball... 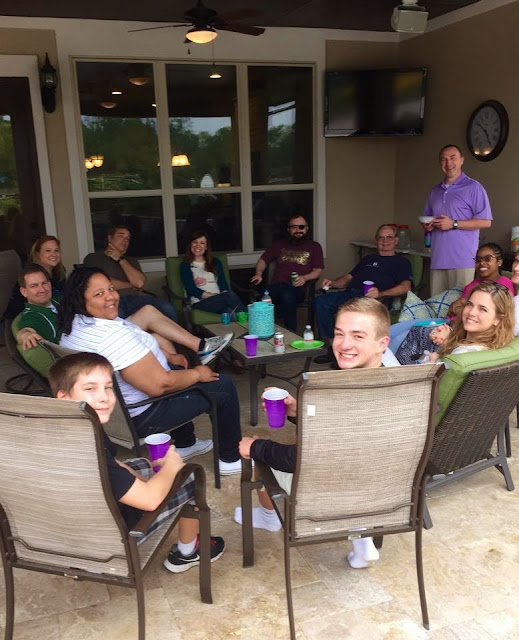 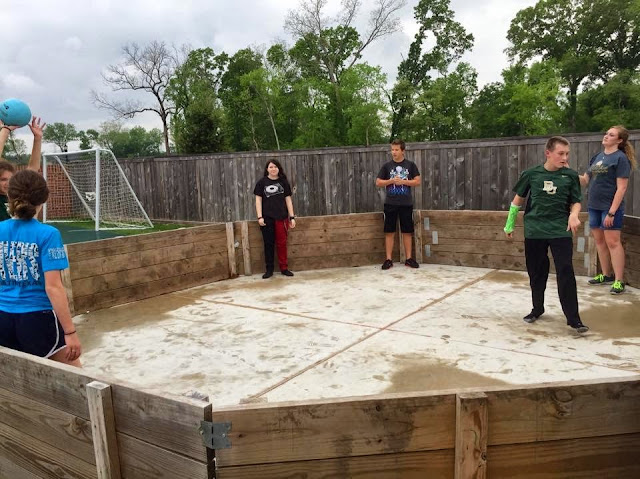 We had a little team-building field trip today after a brief staff meeting...We went bowling, then ate lunch at Torchy's! 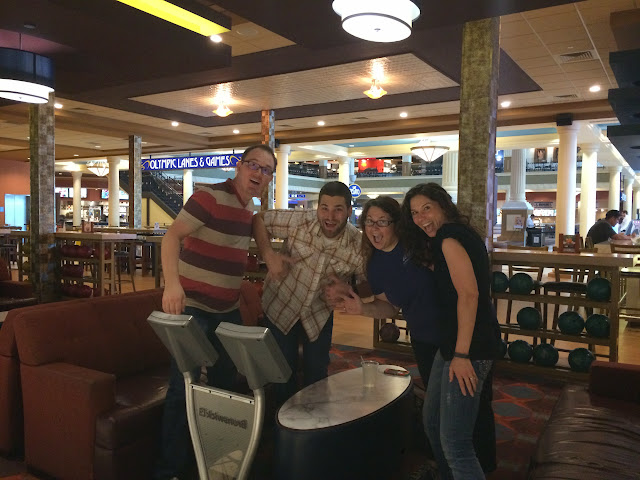 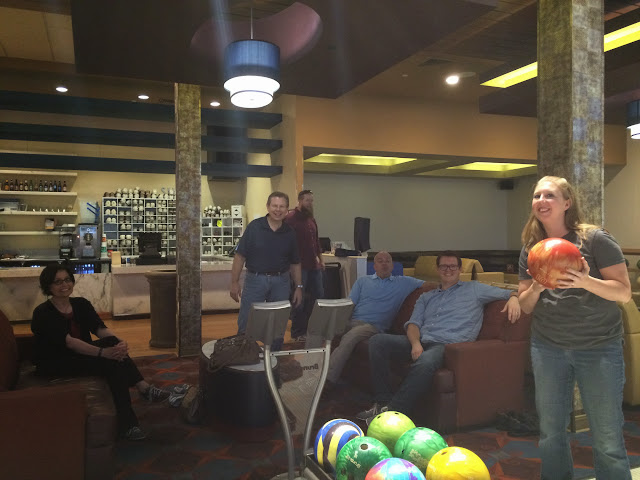 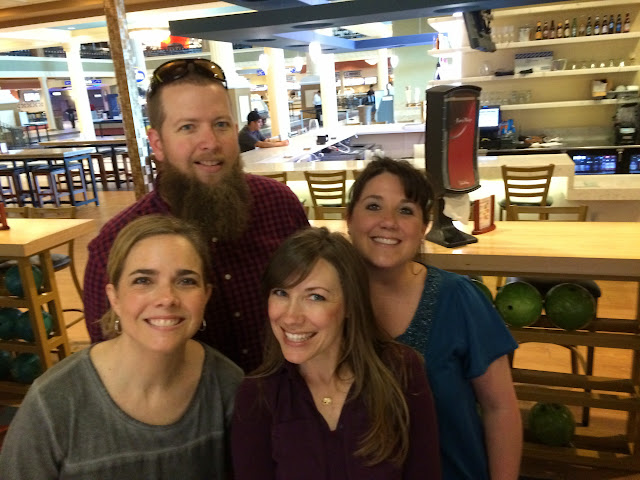 My team came in 2nd to Jana's team (in the second picture above). Neil walked all around the office in a homemade crown this afternoon asking whose team won... 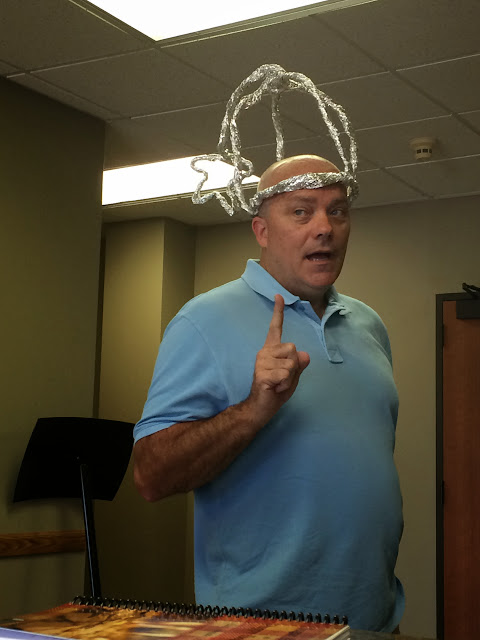 And in case you can't tell, that's a star attached to it...! 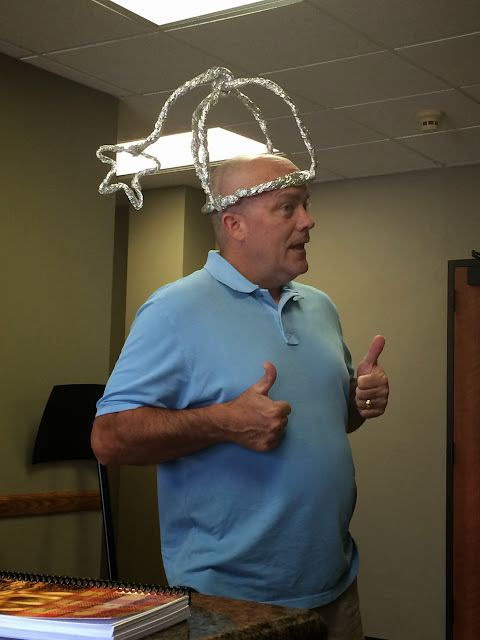 Never a dull moment!
And finally... 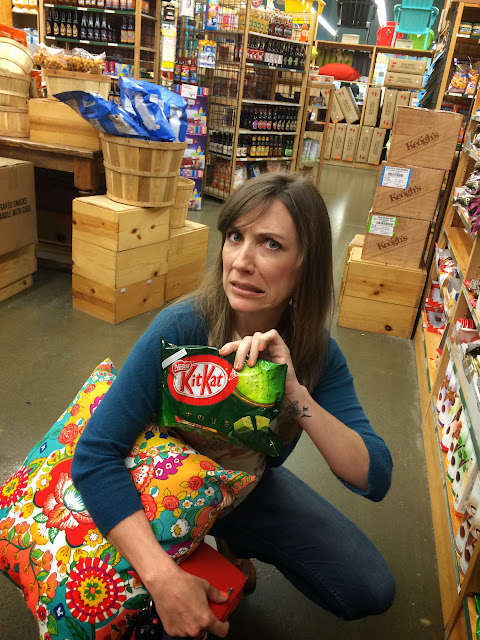 What?! Have you seen green Kit Kats?? Apparently they're Japanese and are just one of 15 different flavors. I just don't know how to feel about them. Part of me thinks they'd be gross, but I'm a bit curious at the same time...What do you think?

My battery is about to die, so I'm going to post this without proof-reading. Please forgive any typos! I hope y'all are having a super great week!! ♥

Zion said…
I love kit kats. They are my favorite candy bar, but I like things to be as naturally colored as possible and so that freaks me out a bit. Glad you didn't get hit by a van :( I had a similar situation once where I know God was protecting me. And DESSERT BAR!? Say no more.
April 11, 2015 at 5:36 PM