Today was the Dessert Auction, and I'm beyond tired, so I'm hoping this post makes sense. If not please forgive me...

I haven't done this in awhile, but before I forget I'd like to post my favorite lines from today's song:

I have more that I could say about the song, but I may not last until the end of all that I'd like to share with y'all about my week...

Wednesday was Admin Day, but I didn't know it until I received a Happy Admin Day text from Clyde early Wednesday morning! Because of the last-minute things that are generally associated with the aforementioned Dessert Auction, I had taken off Wednesday instead of Friday. I was delighted to receive a few Admin Day gifts when I got to work on Thursday! :) I meant to post the following picture on Instagram this week, but apparently I got distracted between making the collage and actually posting it! 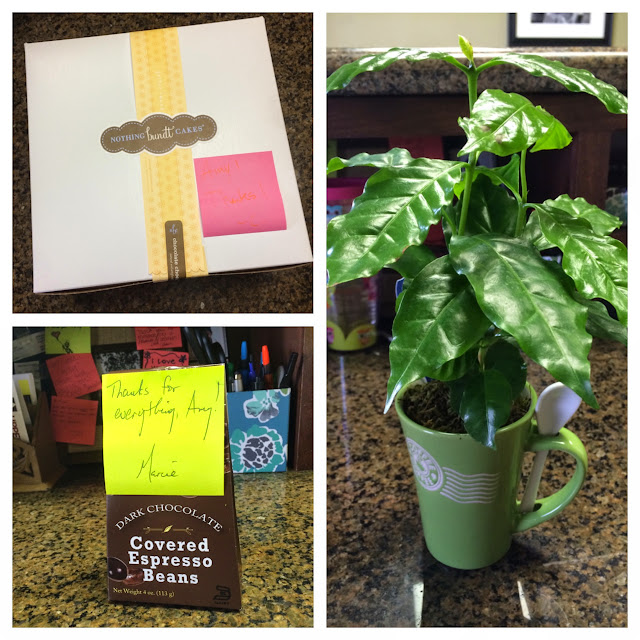 On Wednesday night, my birthday girls & I celebrated Amy's birthday! We went out for Mexican food and followed that up with ice cream. Sadly, we didn't take any pictures. We even saw three sets of friends from church and didn't think to have them take one! :/

As I mentioned a couple of times already, the Dessert Auction was today! I've probably said this in years' past, but this is our student ministry's annual fundraiser. It usually brings in enough money to cover transportation for camps and other summer events as well as camp scholarships. Kim, Amy, & I helped Cody, Isaac, & Alex (a.k.a. the CIA Squad, or CIA for short) make a dessert yesterday... 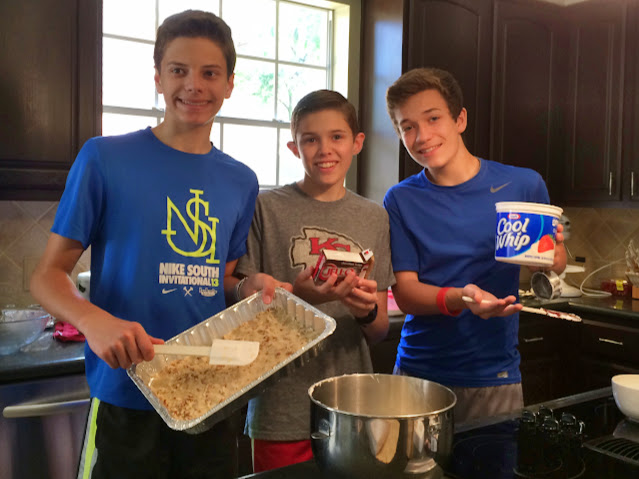 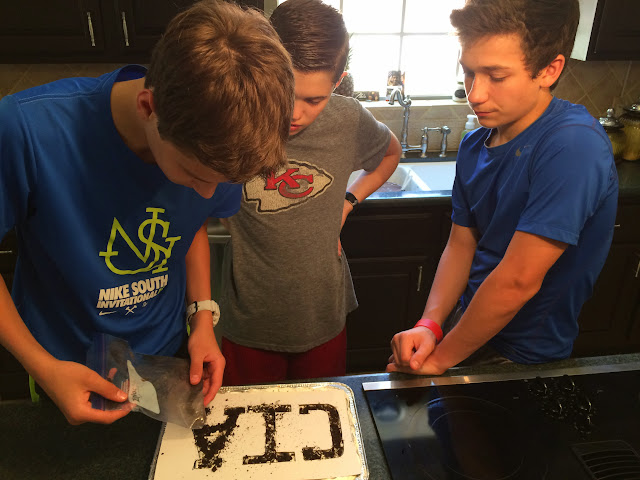 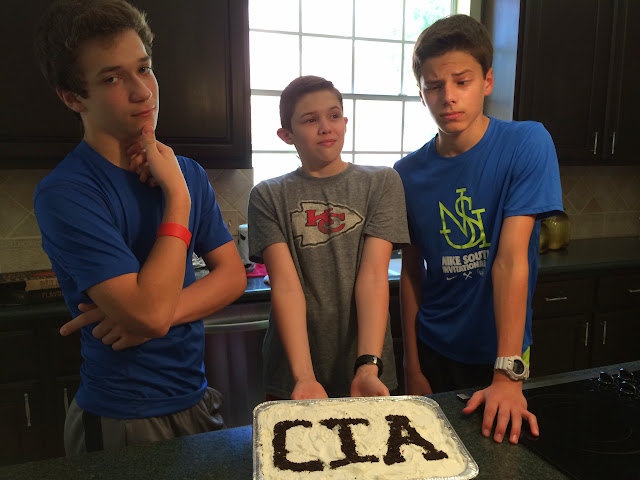 And Elly & I made Dr Pepper cupcakes last night. She had already showered and had a towel on her head, so I took a picture of the ingredients... 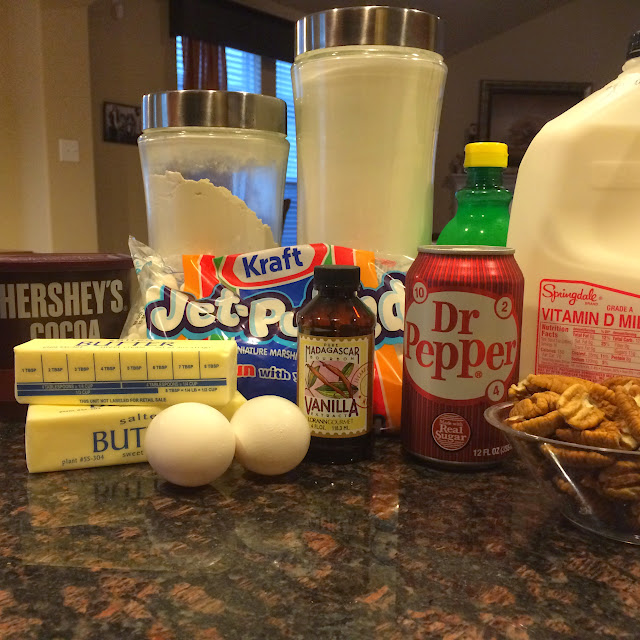 ...& completely forgot to take a picture of the final product. #fail

The auction went really well! I must confess that I had a brief moment when I had to shut the door to the conference room (where we were collecting the desserts) and vent to a couple of my friends. Apparently my I don't knows weren't sufficient for a couple of people who asked me questions regarding things that were not my responsibility, and I was feeling a bit overwhelmed by their persistence. Sometimes people don't seem to understand that I cannot know what I do not know! Aside from those few moments, though, I feel like the day was super! I am super tired, though! I'm sure I'm not as tired as a few of our men who got up super early this morning to start cooking the delicious meat. Another 15+ parents & volunteers and 40+ students worked hard both behind the scenes and serving publicly today, and I don't even know how many additional volunteers helped moved chairs and tables to transform the fellowship hall & sanctuary into a buffet line & dining hall. We couldn't pull it all off without these faithful volunteers, and I am so grateful!

And of course I am grateful for the generous people who spend exorbitant amounts of money on lemon squares, cheesecake, and brownies that they either don't eat any of or share with everybody! I was particularly touched by a situation that occurred before the auction even began. A man I've never met found me in the conference room because he and his wife wanted to give a scholarship for a student. That is actually common and wonderful, but it was the next part that really got me because I can relate to his experience. He said that he also wanted to give enough for that student to have some spending money at camp. He remembers not being able to afford the extras like t-shirts and snacks, and he wanted to be sure that a student who went on scholarship would also be able to buy a few things at camp. ♥

One final thing for today...I've been working on a little patio re-do! Though I still like what I had out there, the weather (mainly the humidity) just isn't very nice to fabric. The pillows and cushion couldn't be cleaned anymore, and the glider hadn't been painted in 15+ years (when I first got it from my step-dad)! So I used up some gift cards from Christmas and bought a few things to freshen the patio up a bit. And though I desperately need to clean up the ground and walls, I couldn't wait to show y'all some pictures!!
BEFORE: 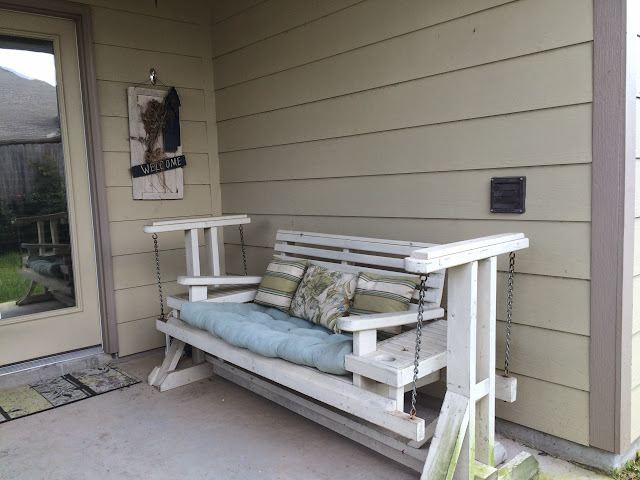 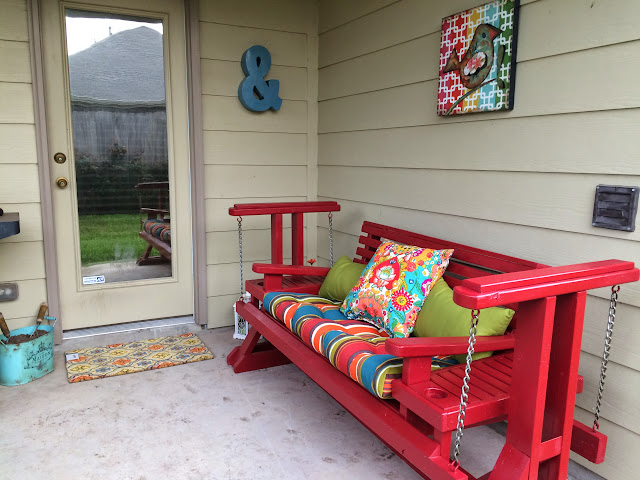 In case you're wondering, the ampersand is a symbol of Daniel 3 and a bit of an anthem among the She Reads Truth community. It is a reminder that God is able to deliver. And if not...He is still good, and I will serve Him. I thought the "&" was a fitting decoration for my patio since, as you may recall, I like to refer to it as my sanctuary. And a sanctuary is a good place to remember God's goodness.

I hope y'all have a super great week! I know I will because my Tuesday night plans are great enough to last for awhile...! ♥

Zion said…
Ohhh no I don't think I have seen that side of you on the blog. I know how people can be though. That's unfortunate. Especially when it is supposed to be for such an honorable cause. That is really sweet what that guy did for one of the students. And lastly your patio makeover is AMAZING! Great job!!!
April 27, 2015 at 12:24 PM