This has been a good week! I got to hold babies at a four-year-old's birthday party one morning, which is always super! But what's even more super is the fact that the birthday party was at Nichole's, and she is now my neighbor! :) I finally got to have a baking date with Amy one afternoon this week! It has been waaaay too long since we've baked yummy goodness together! Elly & I did a little shopping this evening! We both had gift cards to spend, so she asked if she could go to Target and the mall with me. {Have I mentioned that I love the fact that she likes to go shopping with me?!} And today was Norm's memorial service, which was a beautiful celebration of a life well-lived.

Baby girl went to a birthday party last night, and my sweet boy went with me to drop her off & pick her up. We had almost two hours to kill, so we decided to go to dinner. We wanted froyo after dinner, but we decided to let our food settle a little while we went for a drive. We found a park where he climbed trees & did a little parkour on the playground equipment while I hung out on the swings :) 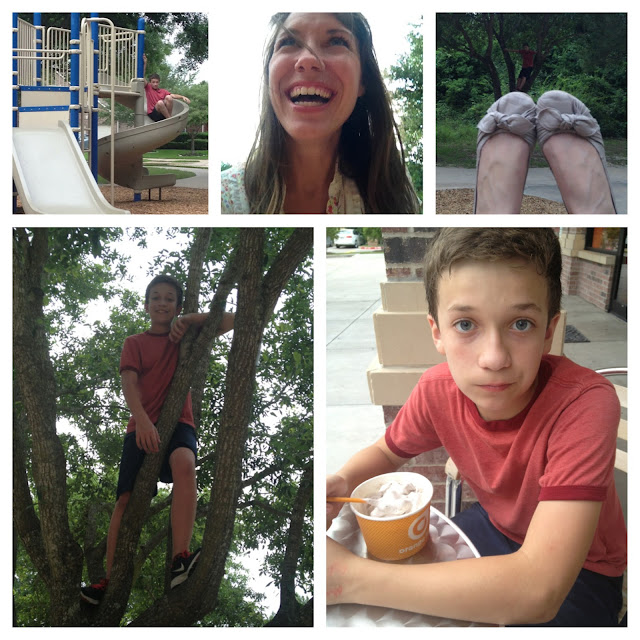 So...I'm basically famous. OK, not really, but I was on the news the other day. I had the video embedded in this post, but it made blogger do crazy things. So you can see the video here. Laurien & I were eating lunch at Torchy's while there was a jewelry store burglary going on about a block away. At the time that we were filmed walking across the street, we had no idea what had happened. We saw the police tape & news vans, but we didn't know why they were there until later.

Today's song is {once again} not accurate. I don't remember if I told y'all that my iPod isn't scrobbling anymore, so it makes it very difficult to know what I've listened to the most. But I picked today's song because it came on while baby girl and I were watching Switched at Birth tonight. And I like Amy Stroup. ü

Jen Price said…
Congrats on getting famous! That's seriously crazy, though. Love special dates with my kids. Have a great weekend!
June 1, 2013 at 4:01 AM