"In the Still of the Nite (I'll Remember)"

There's a little medical issue with the person responsible for posting the race pics, so I'm going to hold off on posting about it. If the pics aren't up by next week, I'll just go on without them. OK? OK! For now, I thought I'd share another:

The ladies had a little Blast to the Past event {more on this later} at church last night, & it had me pulling out my prom pictures. I thought y'all might get a kick out of them, but y'all know me better than to think I'd post pics without a story to go along with them! :) So let's flashback 20 years, shall we?!...

It was my Senior year in high school, and I had been dating a boy since December. In a case of colossally bad timing, he broke up with me a week before the prom. :/ I was heartbroken, as you'd imagine. But it was made worse by the fact that I already had my dress & everything. I received an invitation to a friend's ball in New York, which was exciting(!) & gave me an opportunity to wear my dress. But I had actually looked forward to going to my prom! Within a few days, a friend from school heard about my situation and asked if I would like to go with him: There was only one little issue...he had already told a couple of guys that he would drive them, and his mom insisted that he keep his commitment. So I ended up going to the prom with three guys! 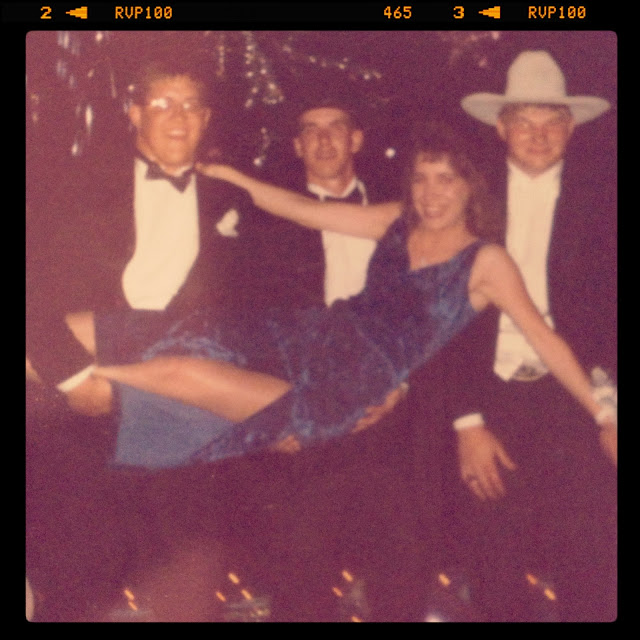 Yes, I realize that the picture looks quite inappropriate, but the situation was way more innocent than it looks! I couldn't find another picture of me with all three of the boys, though. I could've sworn we took official pictures, but I can't find a single one. :/

I'd love to hear about your prom(s)! Do you have any fun/tragic/sweet stories to share? What was your theme &/or song? Do you have pictures as stylin' as mine? Were you able to get your bangs as high as mine?! ;) Please share in the comments, or post about it & let me know when you do! :)

Brooke said…
is that crushed velvet??

Zion said…
This is where our SLIGHT age difference shows ;) Big bangs and puffy sleaves were not popular when I went to prom, but Jeremy's date rocked both. One time I cut out a photo of me in my spaghetti strapped dress and taped it over the girl in one of Jeremy's prom pictures, but you could still see the sleeves protrude from her dress. Ha ha.
May 10, 2013 at 1:37 PM

Jack W said…
I remember those bangs! And I don't remember you telling me the backstory with your boyfriend, but I'm glad it all worked out in the end (for both of us!). Good times.
May 10, 2013 at 3:32 PM