I was minding my own business as Aaron was beginning the youth service on Sunday morning, when one of the students got my attention & gestured for me to look behind me. To my surprise, my small group girls were standing there with balloons on a bracelet and a poster-sized card! 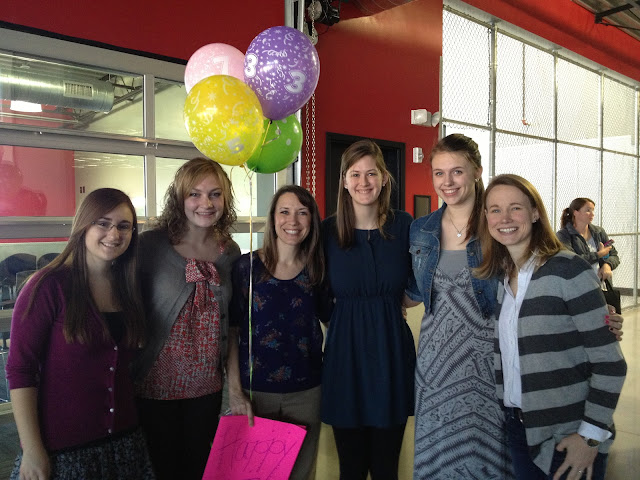 Aaron noticed & said, "Oh! There's a birthday in the house!"

To which I replied, "NO! It's not my birthday!"

He either didn't hear me or chose to ignore my reply, insisting that I get up on stage. I continued trying to explain that it wasn't my birthday. And he finally said, "It's not your birthday?" I told him that it was recently my half birthday, which he thought was close enough to warrant me standing on stage and doing the motions to today's song! :/

What most of the students didn't know was the background to Sunday's happenings, which I had shared with my small group the previous Sunday. And I'll share it with you today in a little:

During my school years, it really stunk to have a summer birthday. I suppose if you didn't like attention, it was a good thing. But for someone who doesn't mind a bit of attention every now & then, it saddened me that I didn't get to celebrate my birthday during the school year.

In middle school, birthdays were extra special because friends would hang birthday posters all over school! They'd also tie some balloons to a bracelet that you got to wear around school all day. It was super cool (or as we said back then like, totally rad) to walk around school all day with people giving birthday greetings. Again, though, as someone with a summer birthday, I was destined to not have that experience. Or so I thought...

Early one January morning, I received a phone call from a friend. In a disguised voice, she simply said, "Happy birthday" and hung up. I was confused until I got to school, where my friends greeted me with balloons on a bracelet and a poster-sized birthday card (that had a cute birthday cake on it with 13 1/2 candles)! ü They had also hung birthday posters all over school! I spent the first half of the day explaining that it wasn't my birthday to everyone who offered me birthday wishes! That got old, though, so I finally just started saying, "Thank you!" ;)

So...do you understand what it's like to have a summer birthday, or did you have one during the school year? Did y'all get to do anything special at school for birthdays? Did you like the attention or prefer to stay under the radar? I'd love to hear your stories!

Brooke said…
i guess i never thought much about it. i'm a june baby.

ps - i'm convinced teapots are of the debil. we do a weighted version in my total body class. hold a dumbell in one hand and bend to the side. over and over and over again. my obiques are still sore from Wednesday.

Zion said…
Well as you know I am a summer birthday and I had the exact same feelings as you! I hated it. What they did for you is so cute and fun! It also means they listen :)
February 8, 2013 at 10:45 AM