I've been listening to NTB most of the week, but today's song isn't really the one I listened to the most (once again). I've already posted that one {twice, actually!} But I have valid reasons to post this one today, and I'll probably use more words than necessary to tell y'all about it {as usual}...I was sitting at a red light on my way to MOPS yesterday when I noticed some smoke coming from Silvie's engine. I turned around to take her to the car shop in front of my neighborhood, but she quit smoking once I started moving again. I tried to convince myself that the smoke had been from the car in front of me & decided that I really needed to get to MOPS, especially since I had a couple of items for breakfast, and it was my turn for the Mentor Moment...

Decision made, I headed back toward the church. It was then that I heard Bear singing the chorus of today's song & had to laugh! It reminded me of another time Silvie had some issues, and I heard The Reliques saying, "Mama warned me there'd be days like this..." {which, ironically, I mentioned in a post that I already referenced in the first paragraph!} Unfortunately, she started smoking again while I sat at the next red light {'cuz it's a rule that you have to hit every red light when you're running behind, right?!} At that point, I was over half way to the church. So I kept going, praying that I'd make it without Silvie exploding or something. {I kept an eye on the temperature gauge, in case you think I was being completely irresponsible!} Wade & Aaron looked under the hood later & discovered that I was out of coolant. Long story short: Silvie is all fixed up, and she shouldn't be exploding any time soon.

In other news...I've had a sore throat for two weeks, and now I'm siiiiiiick! :( It probably didn't help that I stayed up way too late at a sleepover at The Warehouse last night, huh? I'll take some Nyquil tonight & try to get to bed early. Maybe I'll feel like new in the morning?

Our friend Dave E. Crockett finally came over to see his namesake. I wish I could say that I was able to hide him away until next year's Christmas party, but it was not meant to be. Wheeler has procured more historical figures & is in the process of painting them for display at my home. Isn't that nice? We currently have an extra Davy (for Dave) and Sam Houston. 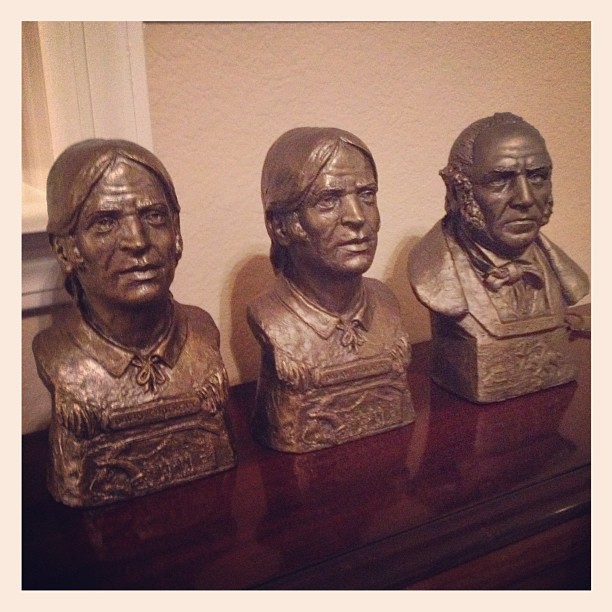 There are two more figures to complete what the guys in my home group affectionately refer to as The Mount Rushmore of Texas History. Oh joy! :/

The rest of my week consisted of work & a little bit of time with friends! Heather is visiting from Costa Rica, and we got together for coffee one morning! Jana & I got together that afternoon, and I watched her do laundry. {Did I even offer to help? Did I explain that I had a migraine?} I became aware of the fact that I owe y'all an apology for posting the video about Elly's Halloween costume & not warning you that there was absolutely no reason to watch the entire 3+ minutes of it. I'm sorry! Nothing exciting happens at any point. :/

As y'all probably saw, Cody turned 12 on Thursday! He wanted burgers for dinner, but Chris had a meeting. So I grilled burgers for the first time ever! They turned out alright, but I had to put them back on the grill after I had already brought them inside. I think I'll leave the grilling to Chris from now on. We also had ice cream cake, and I made that successfully! Alex came over last night, and we had pizza & yummy brownies! They didn't want to simply smile for a picture, so this is the best I got: 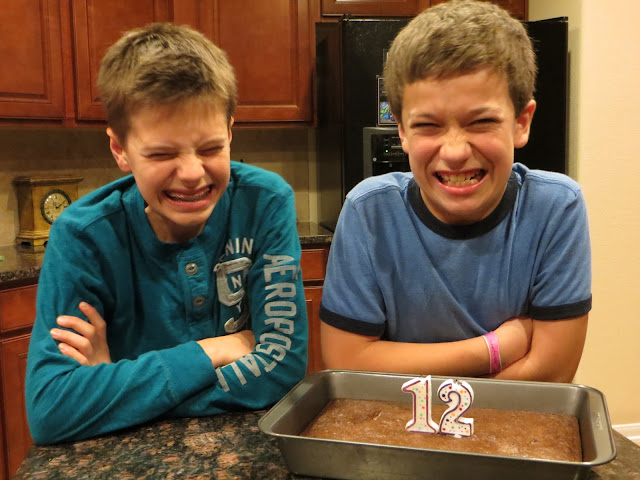 I guess that's all for now! I hope y'all are having a super great weekend! ♥

Jennifer {Studio JRU} said…
Oh goodness... lol... happy to hear Silvie is all fixed up now and you made it! Sorry to hear you are sick. I hope you get lots of rest and feel better soon.

Zion said…
Those statues are hilarious. So are those silly boys. I am the same way about grilling. I hate how you can't for sure tell if anythings done. Grrrr.
January 17, 2013 at 10:26 AM