This week has been super great, due in part to the fact that I got to sleep in four days in a row! Not that I slept very late on those days, but even an hour later than usual is super! Baby girl & I went to the mall on Wednesday, we spent the day at Kerry & Wendy's on Thursday, and we put up our Christmas decorations on Friday! We usually watch Elf after decorating, but I had met a friend from high school for lunch {Hi, Amy! You can subscribe by email now ~> see the "Follow by Email" thingy above the blog archive!} & had friends over for dinner as well. So we didn't have time yesterday & are watching it tonight instead! :) Some of my favorite movie quotes ever are from Elf! They're probably predictable, but I'll save them for a special day anyways.

There was a knock on the door after 9:00 on Wednesday night. Seeing as that doesn't happen unless we're expecting someone, I figured it was Kristi. I had just left her house after borrowing a few tablespoons of lemon juice {which somehow took nearly an hour to do...ftr, I wasn't the only one talking!} & thought that she had forgotten to tell me something. It turned out to be a different neighbor, and he was bearing a delicious thank you gift for me! I hadn't done much {simply turned off his grill when he was away from home, which he said, "saved his house from burning down"!} but he thought it was a big enough deal to buy me a Goode Co. BBQ Brazos Bottom Pecan Pie! 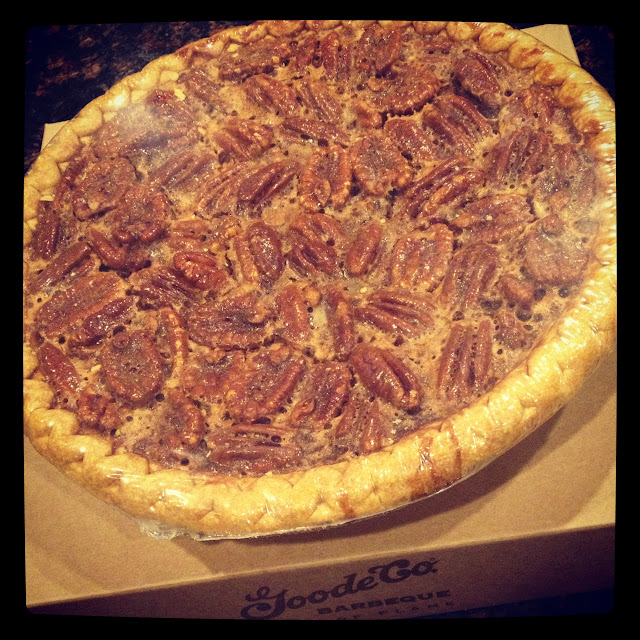 In case you didn't see the spider update & care to know its resolution...Elly updated the post to tell how things went down in the end! She forgot to mention the key words it was BIG!! But I promise she agrees with me that it was not an itsy bitsy spider! Also {because she's the best} before I made it back to the van, she had thoroughly cleaned my water bottle to remove all evidence. I'm not a big fan of spider guts on my water bottle, so I thought that was a nice gesture!

Guess what?!...today I visited my baby brother for THE LAST TIME at this place!!!! 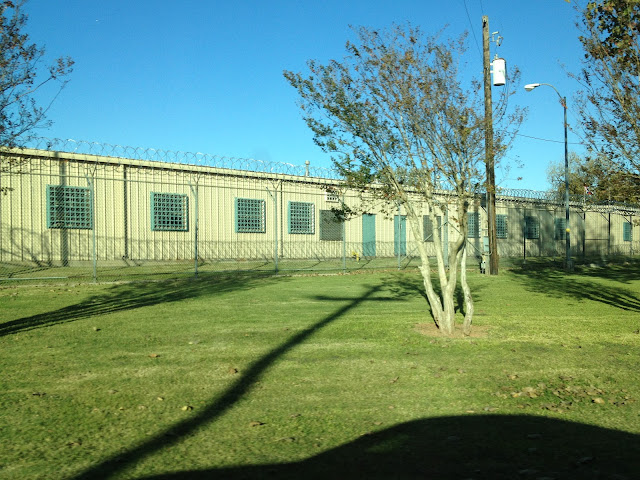 There aren't enough words to express how happy I am about that fact!!

So, funny story...any time I'm making something yummy, the kids ask if it's for MOPS. It started because that really did seem to be the case (to Cody, anyways). But it has evolved into a running joke. So the other night, I was telling the kids that I had friends coming over two Friday nights in a row and would need them to figure out something they could do. Cody suggested that they go see a movie last night, but I said they should hold off on that. I explained that they could be home last night, but I needed them gone next Friday night. He proceeded to ask who was coming over, and I told him that Laurien, Julie, & Nicole were coming last night, and my MOPS table was coming next week. He {quite dramatically} said, "Has it really come to this?! You're kicking us out of the house for MOPS?!" And he & Elly proceeded to have a long conversation about living on the streets, having to learn how to make fires, and eating rat brains. {Can you tell he's been watching Man vs. Wild?} Elly said she'd just eat at soup kitchens and stay at Kiya's house, taking Pepper with her...which sparked a discussion on whether Pepper would be happier on the streets or at Kiya's house...Does this type of conversation happen at everyone's house, or is my family a bit odd?

And sad story...I lost my knitting bag. I seriously have no idea where it could be. Chris & I went to the Kafe today to see if I left it there a couple of weeks ago, but apparently I didn't. The only other place I've taken it is the church. On Fridays, when I sit at Kathy's desk (to answer the phones & greet anyone who comes in the door), I bring my knitting stuff in case I run out of work to do. But Kathy doesn't remember seeing it. And that makes me sad... :(

So I realized that we finally got something for above the mantel (several months ago), but I never showed y'all! I mentioned a looooong time ago that Christopher had planned on making something to put inside the niche, and over a year ago it still hadn't happened. He doesn't really have time to make something right now, so I convinced him to let me get something for now. It didn't really take much to convince him, because I bothered him so much about making something that I'm pretty sure he was tired of hearing about it. If he wants to make something later, I'm totally fine with that. But for now, I'm glad to not have an empty spot! It was impossible to find something to fit inside the niche that I liked, so we decided to hide it: 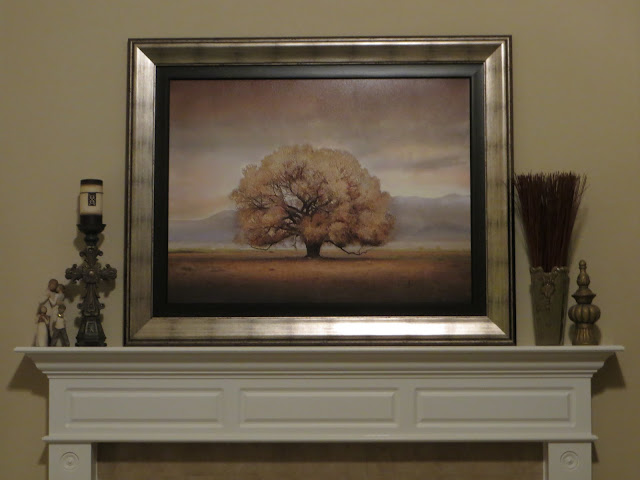 I've posted today's song before, but it really is so great that I had to post it again! If you haven't listened to it, you really should! I know I say that a lot, but I'm serious business. Don't just listen to the tune, really listen to it. You may even want to look up the lyrics, because there's some really good stuff that he says rather quickly. The song has been done by lots of people over the past 100 years or so (Johnny Cash, Elvis, & Brad Paisley, among others), but I like this arrangement the best. There are so many beautiful lyrics that make you want to cry out of both sadness and joy. From sadness because of the reality of life, and out of the sheer joy that God gives us in the here and now and especially for what is to come! Of course I love the "Cheer up, my brothers. Live in the sunshine" part! :) And I smile when I hear, "And one day when the sky rolls back on us..." But I think my favorite part (right now) is:

And there's also a part about what "keeps me ramblin' on" that makes me think of myself & what I do on this here blog (and in real life). So I guess I'll let y'all go! I hope y'all are having a wonderful weekend!! ♥

Jennifer {Studio JRU} said…
Sounds like you have had some wonderful days, Amy! Elf is such a fun movie! :) So, so happy to hear you visited your brother there for the last time! I don't think that conversation sounds odd at all. We have some very interesting ones too. ;)
November 25, 2012 at 3:45 PM

Brooke said…
you must be super excited for your brother to be coming home!! :)

Zion said…
I don't remember you posting this song before, but I go the chills just reading and thinking about the lyrics. I got to see him this summer and hear this song live. I met him and his wife (whose kids are all the same ages as mine). I am the biggest fan! Love. love. love. him. and he's not that huge, so it's cool to know that you like him too. I just said a lot about Josh Garrels, but I love hearing about your life too and getting see pictures!
November 27, 2012 at 10:30 AM