"Flying for the First Time"

I have absolutely no idea what song I've listened to the most this week. My iPod is in the van, and I have a migraine so I'm not going to get up and get it. I hope y'all are OK with me posting another Elenowen song! :) This one is probably my favorite, though I'll be honest & say they sound a little off-key at times in this video. The album version is super, and the chorus sounds beautiful. That's probably my favorite part of the song.

I completely forgot to tell y'all that we went to dinner with Jana's family last Friday night! There were two things I wanted to mention about it...First, there was a live band who covered that terribly great "Amie" song right off the bat! It's one of those songs that I only like because I grew up pretending they were singing to me, but I don't really like how it sounds at all. And second, the kids got Push Pops, and my little friend kept trying to turn his upside down & drink through the "straw". It was super cute! By the time I was able to take a picture, he had figured out which end was up. But I still thought I'd show you his cuteness! :) 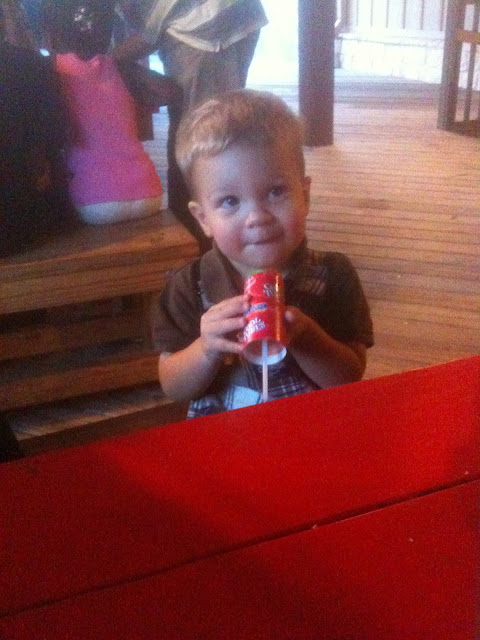 A few of our friends came over on Monday to spend Labor Day with us! I know that the quality of this picture is awful, but it has all of us in it! :) 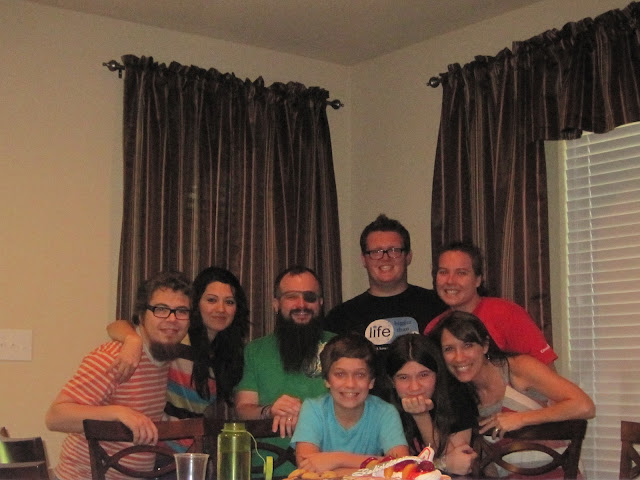 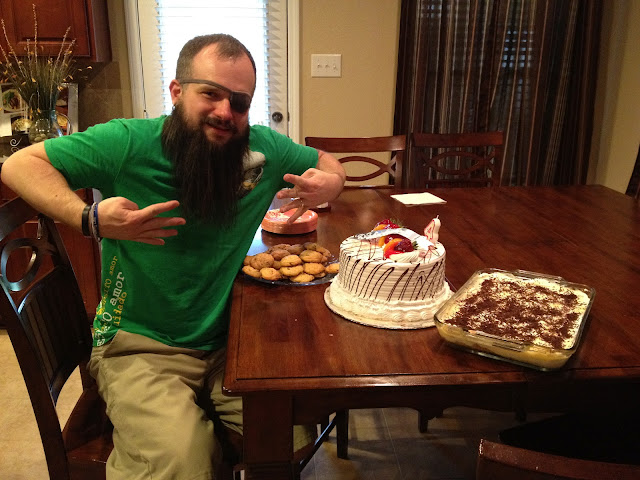 {No, he's not throwing gang signs...those are fours. And yes, we ended up with three desserts. 'Cuz dessert is awesome!}

We began a new Bible study at church on Tuesday. The girls in my class really enjoyed our study on John in the Spring, so we decided to go through another Gospel. This time we're studying Luke, and it's amazing how much good stuff we've covered so far! We went through the first week's study together in class, and I think it went well. I second-guessed {& maybe even third-guessed} my decision to do it that way, but after hearing some feedback I'm glad I did it. And this may sound lame, but I'm totally showing the JESUS film. It's a film adaptation of the Gospel of Luke, and Blue Letter Bible has it broken down by chapter. So we're doing it. Yes, it's from the 70's. But some great things happened in the 70's. Plus I really feel like the Lord orchestrated it, so I'm going with it!

Our Wednesday night services started back up again at church this week as well! We had a few new kids in the youth service, so that was cool. I had to go over to the main building to get some Bible study books for a couple of people, and I'm so glad I did because my friend Kim's husband was there! I basically attacked him in excitement over the fact that they're moving back! I think I may have scared him, but (as I may or may not have mentioned before) I'M SO EXCITED!!

Jana, Felicity, & I met up with my tragically hip friend from Canada on Thursday! Canada is far away, so I'm so glad that we were all able to see her! And Friday was MOPS! It was my turn to give the Mentor Moment, which always makes me nervous. But we played Bunco afterward, so it was all good! On Friday night, Kristi & I hosted a Pampered Chef party for our neighbor who is a new consultant. One of our guests mistakenly walked into our neighbor's house instead of mine. Our neighbor is a cop, so we're glad our friend didn't get shot!

This morning, I got to do something special with my sweet boy. He had a little bit of money in his "give" envelope, and he wanted to give it toward a food pantry that is run by a lady who goes to our church. I totally could've just given the money for him. But I thought it would be good for him to go with me to buy groceries & then deliver them as well. I figured it would mean more to him if he actually saw how much food he could buy with his $8. And I also thought it'd be cool for him to see the food pantry & learn a little about what they do. When we got there, she let him put the food items where they belong and talked to him about the different areas where they could use some assistance. It was a great experience for him, and it's one that was so simple that I can't believe I haven't taken him/them sooner. Renae asked if she could take a picture of him, so I got out my camera, too :) 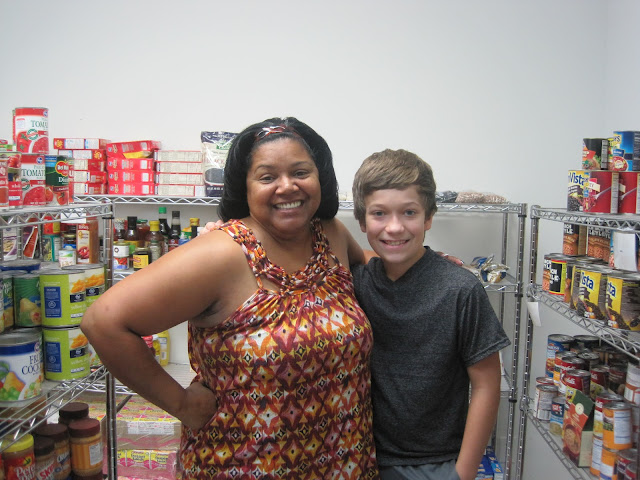 Aunt Linda came to town this evening, and we went to the Skeeters game with her & Dad. My boy got a couple of doubles and scored a run! And yes, I sang every time they played his song! I think I embarrassed my kids... ;) We saw our old neighbor on the screen when they were looking for the most interesting fan! He's bald & has a gray beard as long as my mister's! We also ran into Stephanie (Elly's best friend from elementary school) & her family. They are all super nice! They're the only reason (besides our neighbors) that I'm even a tad bit sad about moving from that area. They're just good people.

Anyways...for my bloggy friends & IRL friends with blogs: I'm sorry I've been MIA lately! I haven't been home much, & I've been working on a couple of projects during the little bit of time that I have been at home. I plan on catching up soon!

Alrighty, I'm going to try to get some sleep! Please disregard any typos! ♥

Laura said…
That's awesome that Cody donated money to Renae's organization and that he got to learn how far $8 can go at the grocery store. So wonderful. :)
September 10, 2012 at 9:35 AM

Brooke said…
you know what's cooler than 3 desserts? 4. i think each year he should have the same number of desserts as years. then invite me over :P
September 11, 2012 at 3:08 PM

Jennifer {Studio JRU} said…
You needed one more dessert... one for each year!! :) What a sweet hearted boy you have there, Amy. I love that he bought groceries for the food pantry!
September 11, 2012 at 9:41 PM

Jen Price said…
Happy 4th cancersersary! And how special for your son to donate his money to buy groceries. Love that!
September 12, 2012 at 9:40 AM

Zion said…
Is Cody doing Financial Peace Jr.? Or just DRamsey in general? Either way, so cool and exciting. Zion just started getting a commission (as Dave calls it) for his chores. We've only been doing it 3 weeks, but it's going great so far! Love the pics and I relate to the gang sign thing because of the numbers I hold up each month in my maternity pics!
September 19, 2012 at 9:14 PM