I'm sorry I haven't posted much this week! I thought I'd get a chance to tell y'all about my little road trip, but I still need to get some pictures from Amy. She has a much better camera, plus she's a photographer. When she had her camera, I didn't even really think about taking pictures because hers would definitely be better than mine! I hope to get those soon! Until then, here's a little randomness...

I finally had Jessie cut my hair a little shorter...After the whole haircut dilemma a few months ago, I was a wimp and only got a couple of inches cut off. Now that it has been a few more months, that scraggly new growth has grown out some more. So after getting a few more inches cut last week, the new growth is now the same length as my longest layer. Not that I get a haircut with the expectation that everybody will notice & say something, but I felt like it was a more dramatic cut than before. Since only a couple of people noticed, I decided to compare it with the pictures that I took a few months ago. And now I realize that it wasn't so dramatic... 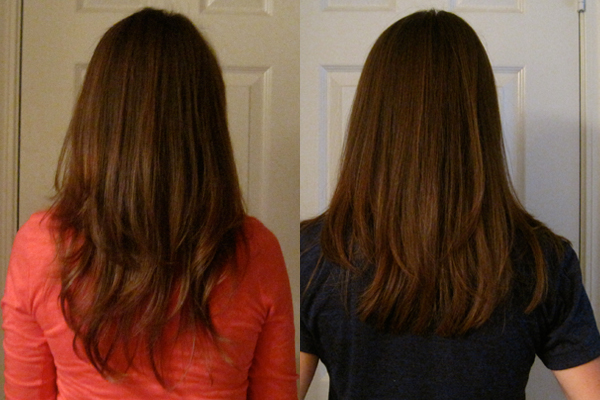 {apparently I still have a bit of a haircut phobia}

I ran some errands in Houston this week & decided to grab some lunch while I was out. While waiting for my sandwich to be made, I looked up and saw a girl who had interned in the student ministry a couple of summers ago! I had been planning on getting my sandwich to go, but she had time to sit & eat with me. It was super great to catch up with her!! I know that we live in a small world, but it still surprises me when I run into people I know like that. I mean, I expect it at the Kroger outside of my neighborhood. But I never even think to look for people that I know when I'm in the city.

A couple of days ago, a tornado hit the little town where I went to high school. My friends & loved ones are all OK, though several of them have storm damage to deal with. The tornado took out the scoreboard & pressbox at the football field, and it overturned a pizza trailer that was parked there for a fundraiser. It also derailed a train just down the road from my godparents' house & peeled back the roof of the hospital. Nobody was seriously injured, and the town has really pulled together to get everything cleaned up. I'm so thankful that it wasn't any worse than it was.

Y'all may not really care, but I made another cowl! I've been meaning to show it to y'all for awhile now, but I kept forgetting. I call this one "Crazy Train". 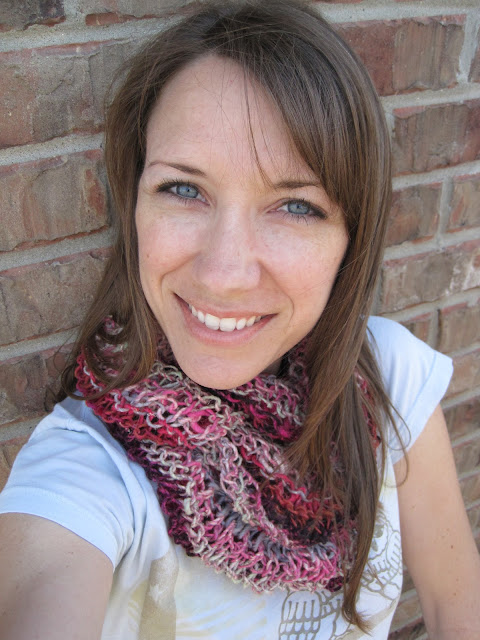 & because I really like it, I'm showing you another {close up} picture so you can appreciate it with me! ;) 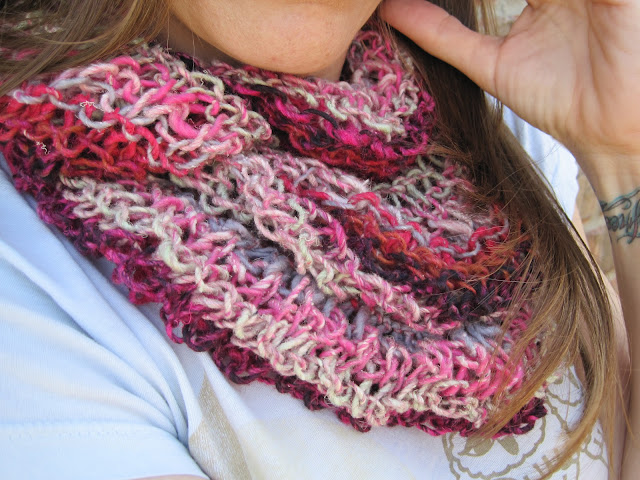 I don't know about you, but I love today's song! I fell in love with it back before it had an official title, and I'm sorta surprised it hasn't shown up on this little ol' blog yet. This song is on their album that came out last month. It's super great! If you're looking for some tunes, you should totally look into their stuff! I love the part of this song that says, "Reveling in deep, deep grace. There are no words for this." ♥

One last thing...my little PIF Giveaway ends soon! Abby Baker's new album [Un]Defined is officially on iTunes, people!! I just downloaded it, and it is quite lovely so far! The deadline for you to enter to win your own copy is in less than an hour. I totally should've reminded y'all at some point this week. But since I didn't, I'll still let y'all enter until tomorrow night (3/12/12) at midnight. Just go to the link I just provided, or click "Email me" under my header.

Alrighty, I need to get some rest! This post has taken way too long to write because I keep getting interrupted by Draw Something. I'm terrible at it, but my friends keep playing with me anyways! I had to laugh tonight when my friend asked if I had to phone a friend to get the answer to his last drawing! Apparently when he watched me try to guess what he drew, he could tell that I paused for awhile. I totally had to get help from my baby girl! I'm just glad I'm not the only one who has trouble drawing! It's fun, though! :D OK, I'm seriously going to bed now! I hope y'all are having a great weekend!! Don't forget to call your mom & tell her you love her (& not just on Mother's Day)! ♥

Jennifer {Studio JRU} said…
I go through phases of haircut phobia. lol Sometimes I want to keep it long and sometimes I like a refreshing shorter cut! So, so grateful to hear the storm didn't seriously injury anyone. There was sure a period of nasty storms! The town next us had so much hail it was over a foot deep in areas. Looked like snow!! Love 'crazy train'... gorgeous colors!! Hope you had a great Mother's Day Amy! :)
May 14, 2012 at 11:24 AM

Zion said…
Since I have been pregnant (6 months) I have said I am chopping all my hair off when the baby comes, because it all falls out. I have had this planned since my last pregnancy, but I admit now that it's approaching I am getting cold feet.
May 15, 2012 at 11:21 AM