"Jesus I Am Resting"

Man, y'all, this week wasn't so great. I was terribly sick, and it was no fun at all. Not that you need proof that I wasn't feeling well, but...I was feeling so ill that I cancelled a coffee date with Sloan, missed the first meeting for our Summer Bible study, didn't go to the ocular oncologist with Christopher {this was only the 3rd or 4th appointment that I've missed out of 72(ish)} & I didn't go to MOPS Game Night. I seriously felt like death warmed over. Before this, I don't think I knew what that phrase meant. Now I do, and I'd rather not feel that way ever again.

I woke up with a sore throat & head congestion on Monday, but I felt well enough to go to our last Moms in Prayer meeting that morning & help Jana out in the afternoon. When I got home, I crashed on the couch & woke up a few hours later with a fever. The only time I left the house for the next few days was to go to the doctor. After being on antibiotics for a few days, I ventured out to the store. That totally wore me out, and I was only away from home for 30 minutes. I could hardly sleep at night because I was achy all over, or I'd wake up burning or freezing. In fact, over the course of three nights I only got a total of 7 hours of sleep. {that's not enough, ftr!} I was able to take a nap each afternoon, though. I was hungry all of the time, but nothing sounded good. I  didn't even want chocolate. And I don't think I had the equivalent of one full cup of coffee over the course of four days (combined). So not like me!

The great thing is I have wonderful people in my life who are willing to help a sickly girl out! Amy brought my sweet boy home from VBS practice (& totally would've taken him to the church if she had known early enough that I was feeling terrible). When I had to cancel coffee with Sloan, she offered to bring me some soup. I declined, though, because Jana was already bring dinner for my family. Chris cleaned up the kitchen two nights in a row. Dad picked up some milk on his way home one night. And they all did these things without me asking, 'cuz they're awesome like that! {OK, well, I did ask Dad to pick up the milk, but that was only after he said he'd pick up anything if I needed it!}

I finally started feeling human again on Friday, which was just in time for Laura to come over & do some Pinterest baking! We made Cinnamon Bun Scones & a breakfast casserole, and I enjoyed every bite! My first real adventure out of the house was on Friday afternoon. Cody had a little celebration at school, and they needed parent volunteers. I had signed up before I knew I'd be sick all week, so I was hoping I could make it the entire two hours! Somehow I ended up working the cotton candy machine, which was a first for me. For the record, you really should be taller to work that particular machine. I had to stand on my tip-toes the entire time. {Side note: I'm really not that much shorter than the average woman, so I have no idea how people shorter than me get by in life!} I made over 100 servings of cotton candy, and by the end I was a sticky mess! My hair felt like it did in the 80's when I'd go through a can of Aqua Net each week ~ only I didn't use any hair spray yesterday. My arm hair was blue, and my shirt was all sticky. I'm also pretty sure I inhaled some. Anyways, my friend Cynthia texted me a few pictures that I thought I'd share with y'all! :) 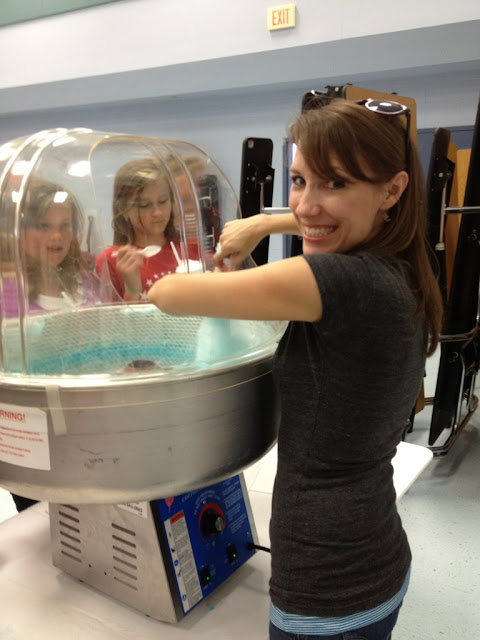 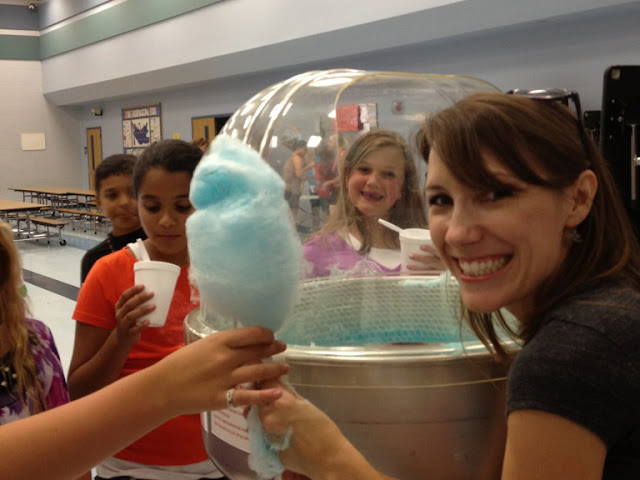 Me with my blue-mouthed boy: 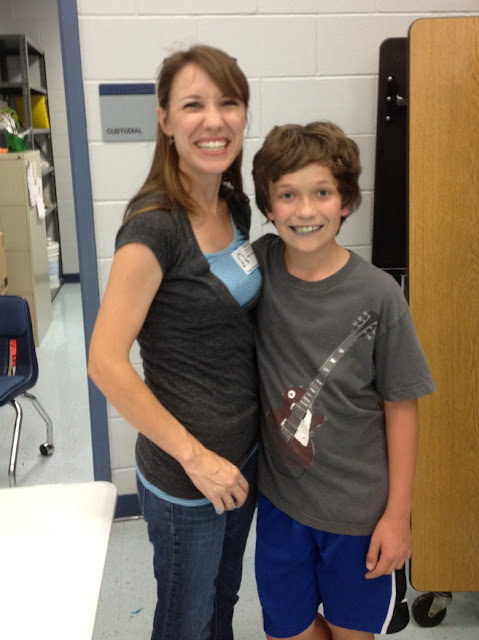 {p.s. My serratus anterior muscles & maybe even part of my latissimus dorsi are incredibly sore today! I gave myself a little anatomy lesson by looking up what was hurting...Who knew that making cotton candy could be considered exercise?! I'm good at discovering new workout routines at school!}

As for the song...I've been doing a lot of resting this week, but this song is (obviously) talking about a different kind of rest. I have a confession to make: I went through a long spell where I didn't really care to listen to hymns. I liked current stuff that was more upbeat. While I still prefer a more current sound, I am loving what the old hymns have to say! Today's song really speaks to my experience over the last few years, and especially over the past six months or so (since around the time I wrote the post about finding rest). Things that I've known about Jesus in my head have become truth in my heart and in my soul, and I have found such peace and joy in Him that I've only known in small pieces before. I have come to know His lovingkindness, goodness, and the greatness of His loving heart in such a deep, satisfying way. Though I have my moments when I'm not as close to Him, I miss that closeness way sooner than I did in the past and draw near to Him as soon as I can! And as He continues to work in me and purify me, I can accept even what is difficult because He is so good! Well, I'm rambling and not sure if I'm making any sense. So I'll close with my favorite part of today's song:


Thous hast bid me gaze upon Thee,
And Thy beauty fills my soul.
For by Thou transforming power,
Thou hast made me whole.
I hope your weekend is super! ♥

Jennifer {Studio JRU} said…
That beautiful smile... never would have guessed you weren't feeling well! :) Sorry to hear you were so sick. I hope it is all behind you and you are feeling better now!!
May 29, 2012 at 9:06 PM

Zion said…
Oh my goodness, that is prove of being really sick and 72 appointments! WOW that is so hard to believe, but we will probably get there with Sedona by the time she is in school I guess.
June 8, 2012 at 9:59 PM