"The Earth is Yours"

How awesome is this song?! I've just recently discovered this band, and I am loving them! I found out about them last week when we were at a little coffee shop in my dad's hometown. It reminded us of the coffee shop we had at our church back home, because Christian bands play there a lot. The kids & I were feeling nostalgic & looking at the band posters on the wall. I recognized a lot of them (like Jimmy Needham, Phil Wickham & Everyday Sunday) and started talking to the owner about them. He was impressed that I knew so many of them {'cuz I'm cool like that! ha ha!} I told him about the coffee shop we used to have & some of the bands that played there. Of course I couldn't remember any bands that are still together! {And Chris was in the van on a business call, so he wasn't there to remind me! I think he was quite ashamed that I didn't even think to mention Modern Day John. How could I forget?!} Anyways, I asked him if he knew any cool worship bands {remember how I've been looking for new ones?} & he told me about Gungor. Turns out I already had a song of theirs! {It was a freebie on the same Christmas album as "You Make the Cold Disappear" ~ that's when I fell in love with Amy Stroup, so I guess I only had eyes ears for her at the time!} Anyways, you should totally check them out!

I've been super busy this week...

And apparently Pepper was glad to see them, too! Have I mentioned that she's a bit of a scaredy-cat? She's afraid of anything & everything, so she doesn't generally get along with people that don't live in our home ~ at least until they've been here for a couple of days. I don't know if it's related to boarding her while we were on our trip, or what, but she jumped up next to Alyssa just a couple hours after she & Erick arrived: 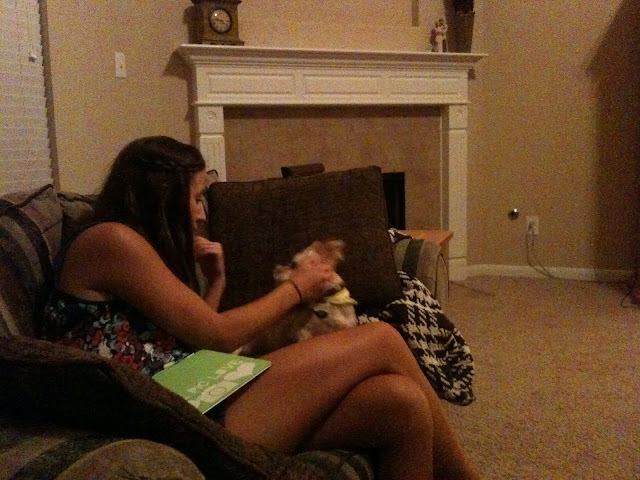 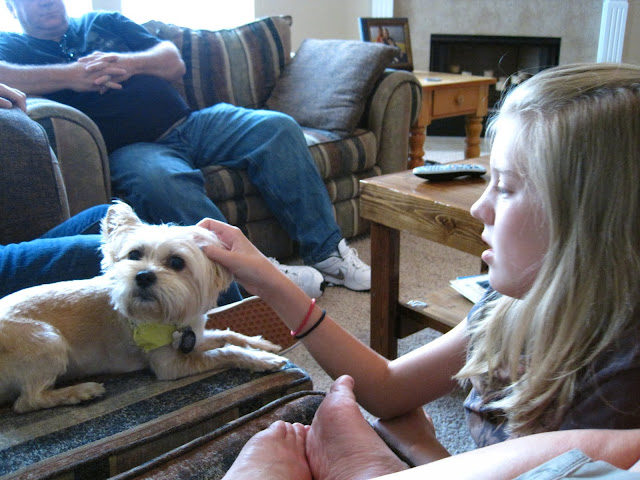 And she hopped into Naomi's lap! 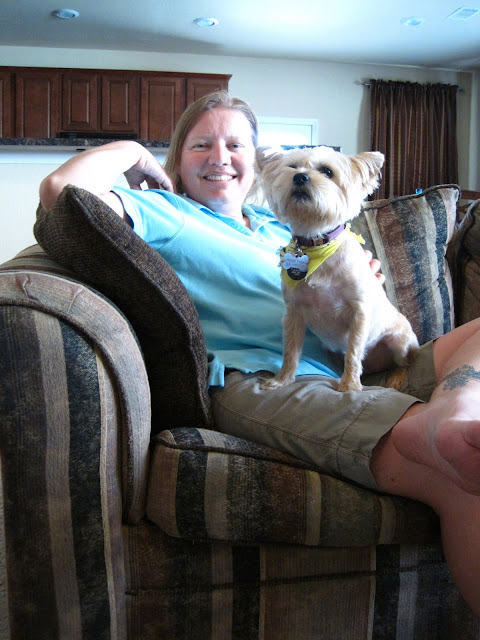 One final thing...Mister Christopher had a doctor visit on Tuesday, & it was the shortest wait we've ever had for Dr C (the one we've waited on for up to an hour & 1/2 before. And the same one we had to reschedule after an hour & 1/2 another time). It was looking pretty bad when he wasn't even in the building at 20 minutes after the appointment time, but he actually showed up about 15 minutes later! Anyways, Christopher's visual acuity is about CF 1', and there continues to be more radiation damage. There are some new spots indicating lack of circulation, as well as some new blood vessels that concern Dr C. As explained in a previous post, these vessels form haphazardly and can lead to glaucoma (which if left untreated, could cause him to lose his eye). Dr C is especially concerned that these vessels may form in the front of the eye, which will cause his pressure to increase quickly. The cataract is also worse, and because of it they can't treat the damaged vessels with laser. He may be treated with a shot (in his eye ~ ouch!) if vessels form at the front of his eye, if the current ones get worse, or if his pressure increases. I asked if the shot would prevent him from requiring surgery, and Dr C said, "Postpone." So, it looks like another surgery is inevitable. The upside to that is they'll go ahead & remove the cataract when he has to have surgery. That won't improve his vision, but it'll be one less thing for them to keep noticing and commenting on. As things stand now, if Chris notices anything different, he is to call immediately. And we're back to seeing Dr C every 2-3 months. If you recall the last time we saw him, things were looking stable. In fact, because his pressure was down & he was seeing Dr B the following month, we didn't have to go back to Dr C for 5 months. But now, even though we're seeing Dr B in 2 months, we have to see Dr C then, too. Fun stuff... :/

Becky Crenshaw said…
Whew, girl. You have been busy! I wish Dr. C could have given you a little better news. Your heart is spot on though. It seems you all have a great outlook. I will continue to pray for your miter's complete healing. xoxo
July 24, 2011 at 4:53 AM