"It's the Most Wonderful Time of the Year"

Well, I'm about to head out on a day trip with my dad. We're going to visit my baby brother again. I even get to indulge in a little pre-birthday yumminess with Dad (his birthday is tomorrow)! He is diabetic & is so good at sticking with his diet. Every year though, he splurges on a Blizzard & a Whataburger during the week of his birthday. Since his surgery (to remove a cancerous kidney), his blood sugar has been excellent, so he doesn't even have a reason to feel guilty this year! Over the summer, I discovered a place that makes steak fingers that remind me of these famous ones they used to make in Dad's hometown. We took him there once. Then Dad & I went back there the last time we visited Aaron. Well, at my brother's yesterday, Dad told me that he thinks he needs to add one more birthday tradition, & I knew he was talking about those steak fingers! So, we're going there for dinner after we see my baby brother! Yum!!

But before I go, let me say that the Christmas season has officially arrived! I know that decorations have been out in stores for awhile now, but I'm just now feeling in the holiday spirit. Like many people, we always put our tree up on the Friday after Thanksgiving. We like to blast the Christmas music throughout the house & enjoy the day together. The kids are such a big help now! They decorated the tree while I did everything else (with some help from my mister). Even my puppy is sufficiently "decorated" for the season! 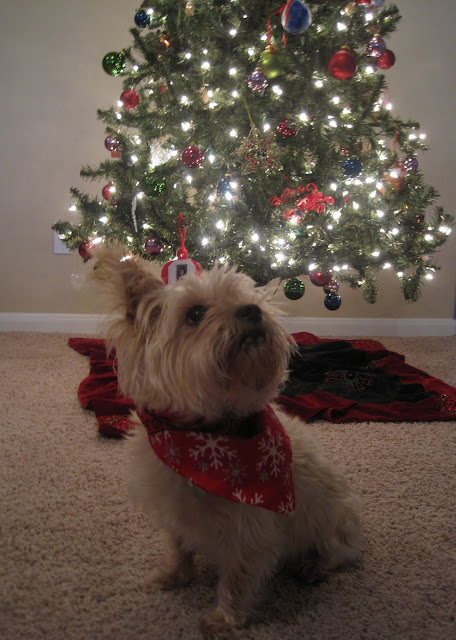 Somehow, my wreaths aren't centered above the staircase. I don't have a clue how they got messed up, but my mister & I measured several times. We placed two CommandTM hooks the same distance to the left & right of the light & the same distance up from the banister, yet somehow they're off-center. I have no clue how that happened, but I'm leaving them the way they are (unless it still bothers me the next time I'm at the store & happen by the CommandTM strips). I would post pictures of the decorations, but my house essentially looks the same as last year ~ except for the off-center wreaths that I just realized I didn't even post a picture of back then. So, here's a shot from last year, where they don't look centered either. Pretend with me that my wreaths are positioned correctly, OK?! ;) 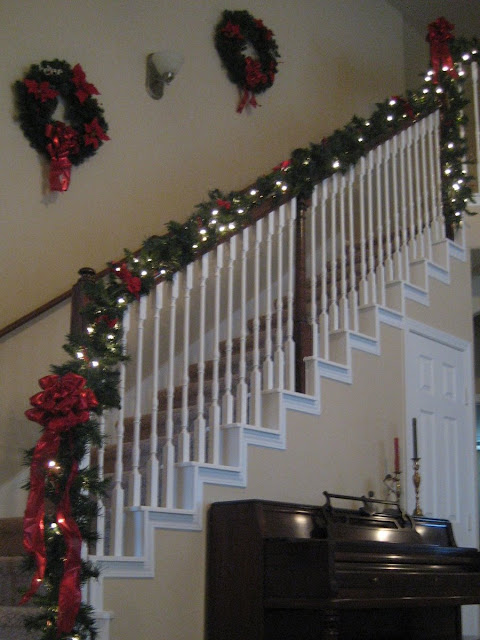 So, how are you doing on your Christmas decorations?? I hope you have a wonderful weekend!

Zion said…
We still have to decorate. I am really hoping to do it today! I think the wreaths look great. Seriously! And Pepper looks cute too.
November 27, 2010 at 1:05 PM

Brooke said…
that's awesome that your dad is taking care of himself :)

Amanda said…
You know how we feel about Christmas in the Payne family....unfortunately since having a beautiful baby boy, life has changed somewhat. We did end up getting the tree up (with lights!) before Thanksgiving. Which we do every year. But everything else has fallen behind. Sadly, our Christmas tree is still only adorned with lights. No ornaments to speak of at this time. Hopefully we will get some time tomorrow. But we will have to see. Your house looks beautiful. I'm OCD and didn't notice anything being off-centered. :)
December 1, 2010 at 11:31 PM