Greetings on this fine Saturday night! Today's song has no significant meaning to me personally. I just like it! I've realized recently that I really like Taylor Swift's music ~ so when I got the iTunes gift card (that I mentioned in this post), I also bought her album. I'm not necessarily a country music fan, but I have a few songs of that genre on my iPod.

This week hasn't been incredibly eventful. I ran some errands, went to the kids' school a few times (for JA & two different "Parent Involvement Week" events), had one last play date with my friend Kim (& her kids) before they move on Monday, spent a lazy day at Amy's & scrapbooked a couple of times. Am I just a spoiled American housewife, or what?

Speaking of spoiled, I need to brag on my mister a little. He brought me some lovely flowers a couple of weeks ago. He doesn't do this much, because I've told him that I'd rather have something I could plant. But, it's sweet of him to bring me some fresh flowers every now & then. {And, let's face it, a girl likes flowers any old way her man chooses to bring them to her!} He makes me smile :) 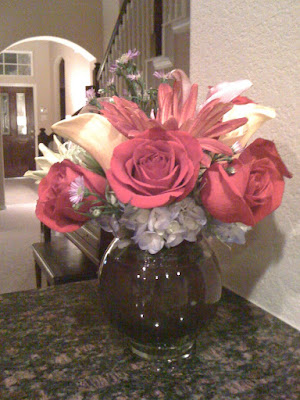 My scruffy puppy has a new look these days. We took her to get a little trim, & the groomer sent her home with a bandana ~ & since she couldn't figure out how to wrangle it off, she actually got used to it! {As opposed to the hair bows that she'd rub off as quickly as she could!} So, I decided to make her a girly bandanna/scarf out of some fabric that I had in the closet. How cute is she?! 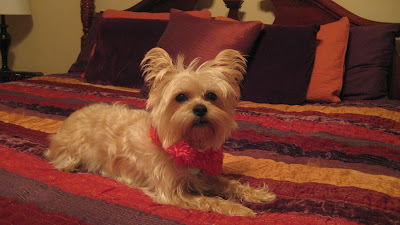 There's one last thing that I have put off mentioning on here, because it makes me feel like a failure. [But, I have to tell y'all, since I dedicated a whole entire post to it this summer.] Sadly, I must inform you that my chair has come to a "sticky end". After repairing one part or another (mostly the same couple of joints) every few weeks, both of the arms came out of the back. I had screwed &/or glued both of them several times already, so I knew it was time to just let the chair go...but I kept thinking that I'd figure out a way to repair it for good! Then, Cody [not knowing it was broken] sat in it & split the back part of the seat completely in two. I don't know why I didn't take a picture of the broken mess in the back. This shot makes it look fixable, but it really wasn't. 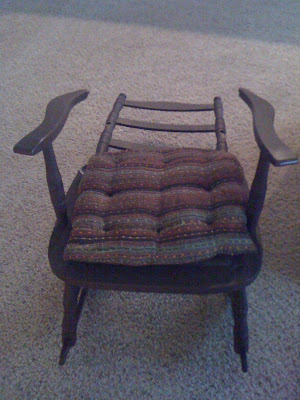 Well, I think I need a new series, meme, or something. My subject matter has become that of a boring old lady who talks about her dog & her rocking chair. Soon, I'll be listing out all of my medical ailments...oh wait, I've already done that! What has become of me?!
Email Post
Labels: Scrobbled Saturday

Brooke said…
the flowers are gorgeous!! :)

Zion said…
Zion loves the song "Tear Drops on My Guitar" he calls it "why I do" from the chorus, he's the song in the car I keep singing don't know why I do. It's funny what he titles his favorite music. He also likes the song "Cure For Pain" by Jon Foreman which he calls "the water song" and if you've heard it you know why.

This comment is becoming my own blog. Anyway, just wanted to say hi. I would love to hear the story of the knife and the white nighty sometime :)
November 24, 2009 at 8:38 AM