Yet again, the words of the song don't quite apply, but the title does. Plus, Freddy was at my house tonight ~ & since he was the guitar player for Modern Day John, I thought this song would be nice! Anyways, it's finally feeling like Fall outside, & that makes me happy!! I had to turn the heater on this morning to knock off the chill! Yay!!

I've been intending to post garden pictures for awhile now, so {in case you care} I will finally do that for you! 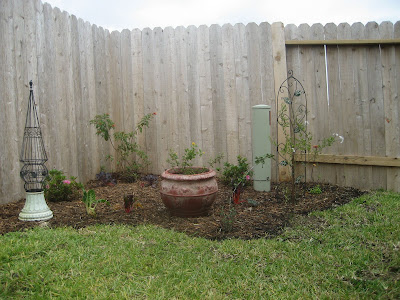 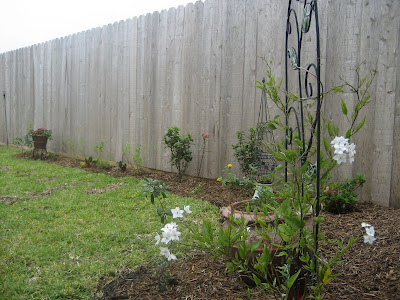 I know it's not so impressive at the moment, but eventually the shrubs will get bigger & [hopefully] fill in real nicely! I planted some Encore Azaleas, Blue Potato Bushes, a Mexican Firebush, blueberries (not pictured), a Crepe Myrtle bush, Jasmine, Viburnum, Butterfly Weed, & some other stuff that I can't remember now! The best thing is that I got most of my plants for 70% off! I look forward to adding to it every year & eventually filling most of the yard with pretty things!

On to other random things that I promised to mention...I have officially given up on growing out my fingernails. I don't know if I've mentioned this before, but I'm a nail biter. Because of that, I've had fake nails off & on since high school. A few years back, I decided to quit paying for nails & work hard to give up the nail-biting habit. & I did well for awhile. The problem is, my nails just aren't strong. They chip & break so easily, that I end up biting them to try to keep them from getting snagged on stuff. They'll look almost decent for about a week, then they start breaking again & I have to start all over. Earlier this year, I had sorta given up trying & found a nail lady that I really liked. But, to save money, I quit going. As usual though, I wasn't successful in growing my own nails ~ so last week, I decided to try a new place close to the house. I was afraid I would regret not going to the old place, & I kept going back & forth (in my mind) as to whether I should just drive further, where I know that LeeAnne does a great job! I convinced myself to try this new place, thinking that I could go back to the old place if this didn't work out. I walked in, & the guy told me to have a seat & LeeAnne would be with me soon. My heart skipped a beat...surely it couldn't be the same LeeAnne! She approached the station next to mine, but her back was to me. She had the same build as my LeeAnne, but I just couldn't believe that I would be so fortunate! I'm sure you know where this is going...she turned around, & it was her!! I was so excited & knew that I had made the right choice! {Yes, I know, this is a vain & seemingly unimportant thing to blog about. But, it was exciting to me, so I thought I'd share it with the world...or at least the 4 people who read this blog!}

Moving on...I have to brag about my kids for a second! They got their report cards, & the lowest grade between the two of them was a 91. It's a shame that my kids don't do well in school, huh?! :P Cody has actually been moved to the GT cluster class. He started last week. I mentioned here that his teachers were discussing him being tested for GT, but I was hesitant about him being pulled out for another hour a week. Well, apparently I was misinformed. Turns out, they recommended that he switch classes completely. After about a week of emails back & forth between myself & his former teacher and several talks with Chris, Cody, and a teacher friend & sister-in-law, we decided that it would be best for him to be in a more challenging class. So, we agreed to do it, and I'm hoping we made the right choice! We'll see...

Today was the last day of the Bible study that I've been participating in at church. I'm always kinda sad when a Bible study ends ~ but this time is even more sad, because my friend Kim is about to move. She was one of the leaders of the study, and the friend who helped me set up my scrapbook closet (shown in this post). Before we moved, we were only a few minutes away from her house ~ but now, we'll be a few hours away. We hung out during the summer, and all of our kids played so well together. We've always signed Cody up on the same soccer team as her oldest son, & it was so fun to hang out with her during soccer. She is just a really sweet person, & I'm going to miss her when she's gone.

On a happier note, we had our Housewarming party on Saturday night. I think we ended up with about 30 guests here (kids included), and everybody fit! There were a couple of times that I had to squeeze through people in order to refill the fruit tray & such ~ but, overall, I was pleased with the amount of room we had! {I can't imagine 30 people in the old house!} Now, if I could save up enough to buy a new table & bar stools, I cold actually seat more people!! (Some day...) I took a couple of pictures, but they're hazy. Cody had been messing with my camera & changed the settings! :( Sorry about that. I know that posts are much more fun with pictures, but you'll just have to settle for the garden ones! I'll try to post something more exciting next time!
Email Post
Labels: garden house Randomness thriftiness