My baby girl made me one of the best birthday presents ever!! It was inspired by a coffee mug that I thought was pretty clever: 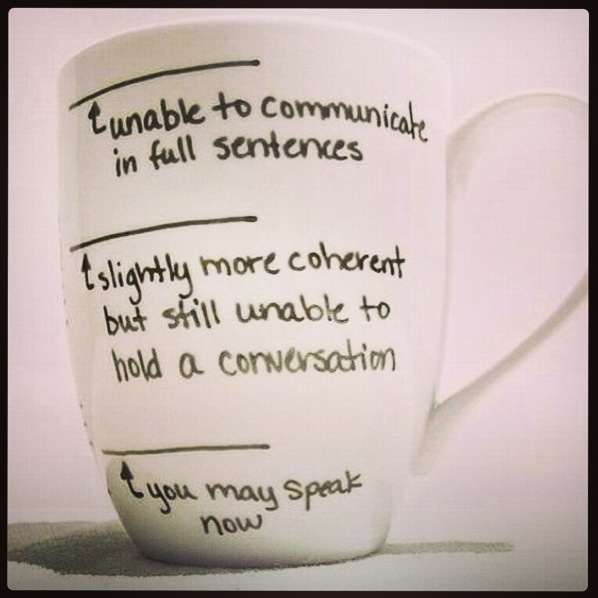 My friend Fran had posted a picture of that coffee mug on facebook one day, and I could totally relate! Just that morning at work, I had experienced some difficulty finding my words in a conversation with Lance. I had explained to him that I had only consumed about an ounce of coffee so far {I think I actually said two tablespoons. Though it isn't necessarily wrong to say it that way, liquids are generally measured in ounces. I'm pretty sure I would've said it correctly if I'd had more coffee!} So when I saw the picture of the "Fill Line" mug, it perfectly described how full my coffee mug was at the time of my stammering attempt at a conversation that morning! In fact, after Lance saw the picture, he said, "You were worse actually." :P

So I posted the mug picture on Instagram {with a hashtag that went something like this: #MyBirthdayIsComingUp} And what do you know?! Baby girl made me a mug that was even better! 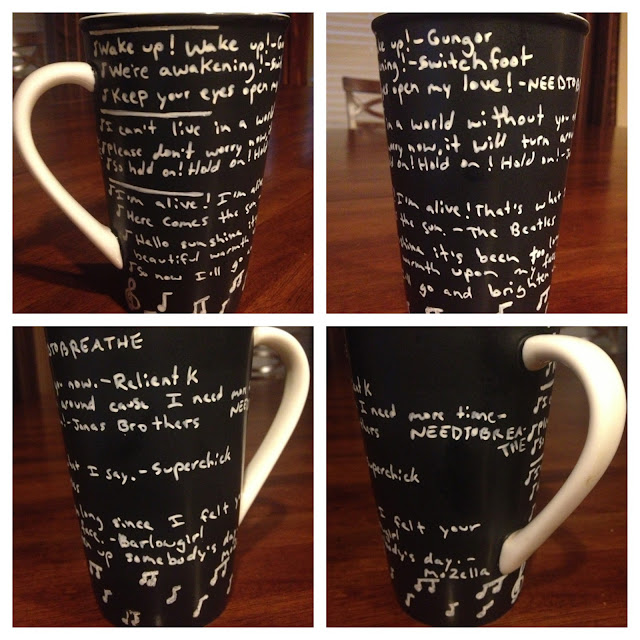 Not only is it a mug with "fill lines", but it's covered with song lyrics! And not just any old song lyrics, either. While I had been out for dinner with my birthday girls, my baby girl had gone through my iTunes to find lyrics from songs of mine that would describe the progression of how I might be feeling from the time that I take my first sip to the point that I've reached the bottom of the cup. In case the picture is hard to read, these are the lyrics as she wrote them:

I'm alive! I'm alive! That's what I say. - Superchick
Here comes the sun. - The Beatles
Hello sunshine it's been too long since I felt your beautiful warmth upon my face. - BarlowGirl
So now I'll go and brighten up somebody's day. - MoZella

And in case you aren't familiar with some of the songs, I created a little playlist:


Pretty creative, huh?! What's the most creative gift you've given or received? Or if you haven't had enough coffee to think of anything, then you can just answer this question: are you able to communicate in full sentences before having caffeine?