As I mentioned on Saturday, I went to Oklahoma with my dad for a few days. My cousin's daughter graduated from Oklahoma State University, and we met up with about 25 family members for the occasion. It was great to meet a few newer additions and see some family that I hadn't seen in 10 to 20 some-odd years (plus a few that I saw as recently as last month ~ which I think is a record for frequency, seeing as we live at least 10 hours away from them). We did quite a bit of hanging out by the fire in the hotel lobby. I must say it was quite odd for this Texas girl to sit by a fire in May! {This probably isn't the time to mention that it was in the 50's? It's SO hot here right now!} I experienced a FIRST on Saturday night...I went to a casino. {And promptly lost the $5 my aunt gave me to play the penny machines!}

Our drive up there was fairly uneventful. Unfortunately, I can't say the same for our trip home. We ended up having to spend an extra 3+ stinking hours in Oklahoma City due to the confounded Oklahoma roads! At around 1:45, we were innocently driving home, when a chug hole (or something crazy like that) caused two (yes, TWO) of Dad's tires to instantly go flat. 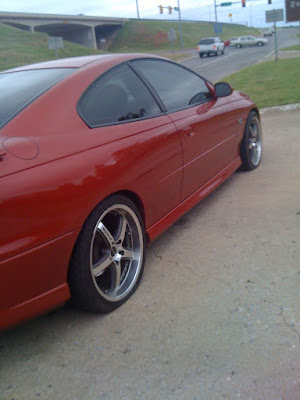 Of course it was a Sunday, so there was only one place that could possibly fix Dad's tire. But we had to get there first. And we had a 3:00 deadline. After 30 minutes on the phone with AAA, we were no closer to getting a tow! We finally got a wrecker service to rescue us at about 2:55. Because things rarely go smoothly for us, neither tire was fixable & Dad had only one full-size spare ('cuz who would've thought he'd need TWO of them?!) His particular tire is apparently unavailable in the entire state of Oklahoma, but the tire guy had some similar ones at one of their other stores. We finally rolled out of there at 5:00 & still had a 7 1/2 hour drive to Dad's, where I would pick up my van & drive another hour home (with a facebook plea for anybody who was awake to call & help me stay awake! Thank you, Tara!)

There were shouts of joy as we entered the great state of Texas! Don't get me wrong, I don't have a problem with Oklahoma itself! My problem is only with its roads! The tire guy even pointed out that the OK roads aren't like what we're used to driving on. I think our little adventure was my penance for telling that joke a couple of times (the one about why Texas doesn't sink into the Gulf), though I promise I really don't believe the punch line to be true. It was a joke!! No, dear state of Oklahoma, you don't suck. You are OK! I like your red dirt, cool wind & little mountains. But I've never been more glad to drive across the state line and feel the smooth Texas roads underneath new tires!

Dad says I should feel privileged: not every mom gets to spend Mother's Day in a tire store! No, Dad, it's a rare privilege indeed! And I must say it was my most memorable Mother's Day yet!

{If you happened to see my last post before the pictures, I thought I'd let you know that they're up now!}