"We Are Free Today"

It has been another busy week for me!! Sally & Sarah are still here from England, & we have worn ourselves out! We explored Hobby Lobby, bought paint for the kids' rooms, spent some time at a scrapbook store, went to Wal-Mart a few times, packed a few boxes, had lunch with the kids, spent two hours at Toys"R"Us, and even more that I just can't remember right now!

The kids started their new school on Monday. Both of them have made a new friend or two, so I'm happy about that! We're getting up terribly early to make the drive, but we only have to do that for one more week. It is definitely worth it, so they don't have to switch schools after two weeks. That would be craziness! 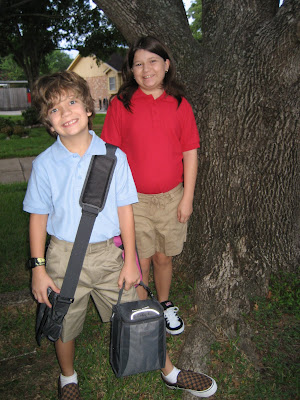 Speaking of craziness ~> WE ARE OFFICIALLY HOMEOWNERS AGAIN!! Somehow, we went from looking at the house to closing in only 27 days!! Have you ever heard of that?! I seriously didn't think it could happen this quick, but here we are with the keys to our brand new house! We signed the papers yesterday morning, & Sally helped me start setting up the kitchen in the afternoon. I'm dropping her & the kids off at Incredible Pizza later on, and Amy & I are going to start painting! I'll post pictures as rooms start coming together!

As for today's song, it is by Blake Quimby. I can't believe this is the first time he has been on here! He & Christopher have been friends for several years now. Last night, we went to Chick-Fil-A, where my mister played bass with him at a benefit concert {& where, coincidentally, I happened to recognize the guy who spoke about ending poverty ~ we went to Bible school together! Small world!} The weather gave us a scare! A light rain cooled us off for a little while, but there were really dark clouds & lightning in the not-so-distant sky. It was sorta scary; but afterward, we could see an entire rainbow! It was pretty cool! Of course, a photographer I am not, so I only got part of it! 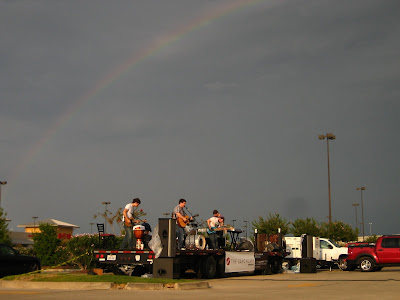 Well, I may not get a chance to post anything again this week. I'll be painting & trying to move as many things as possible. Because of the bleeding in Christopher's eye, he is on doctor's orders not to do anything strenuous. How convenient! ;) So, I'm doing as much as I can before the movers come next Saturday. Hopefully, they'll just need to get the big stuff.
Email Post
Labels: house Scrobbled Saturday Special Day