"Tear in My Heart"

(by twenty one pilots)

So...it has been a couple of weeks since I've caught you up on the happenings around here. It's mostly the same ol' stuff...early mornings for cross country practice, work, chiropractor, repeat...There are a few things to highlight, though!

We started back up with our midweek services at church a few weeks ago. I don't think I've mentioned that I'm with the junior high girls now! Elly has moved up to the group that I've been leading for the past four or five years, so I needed to let her have her space. I told Aaron that I'd go wherever he needed me most, and it turned out to be with the younger girls. Dorothy & I lead the 8th grade girls' small group on Sunday mornings, and Sara & I lead the junior high girls on Wednesday nights. I've known most of this sweet group of girls since they were little, but I look forward to getting to know them better! 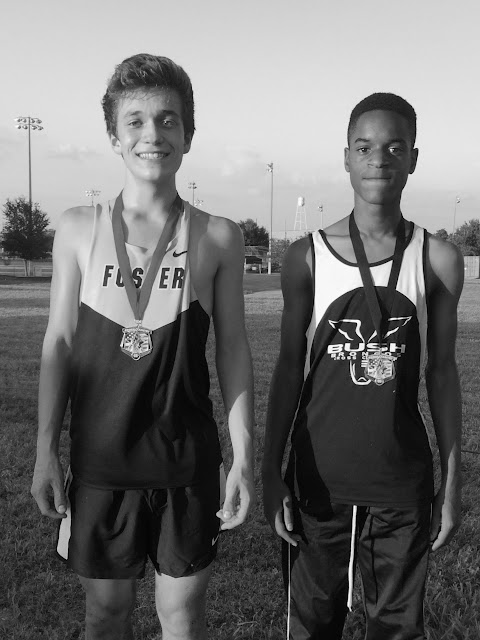 We actually ran into several friends from church! The meet was hosted by the school where my girl Amelia graduated from, and her mom was selling t-shirts. It was also the school where Todd & Amy's daughter Madi graduated from {you may remember Madi from the Junior Olympics last summer!} and they were working the race. Todd drove the mule to lead the way for the runners. I told him that he could've won every race if he hadn't veered off course just before the finish line each time... ü 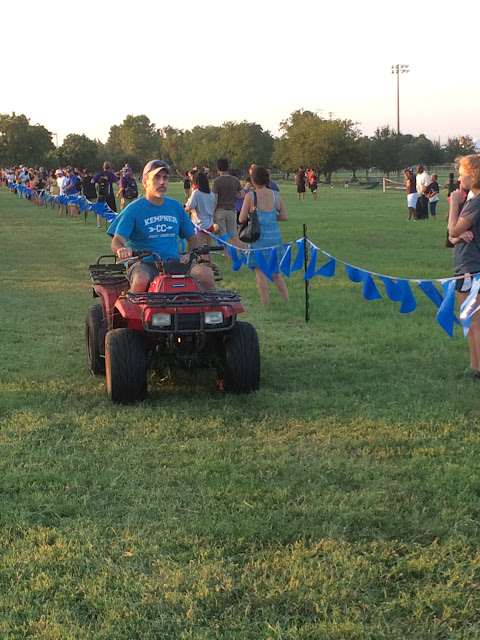 The kids were off school for Fair Day last Friday. Elly went to Briana's, and Cody & I hung out before he went to hang out with friends! It was pretty low-key, and it was nice. The whole weekend was, actually! I finally worked on a gallery wall that I've been collecting items for, but I'm not finished with it yet. Once my last couple of items are complete, I'll show y'all some pictures! The kids both had things to do after church last Sunday, so Mister Christopher and I took advantage of the time and a gift certificate to Pappasitio's!


Baby girl and I were in Houston during the week, so we ate dinner at California Pizza Kitchen... 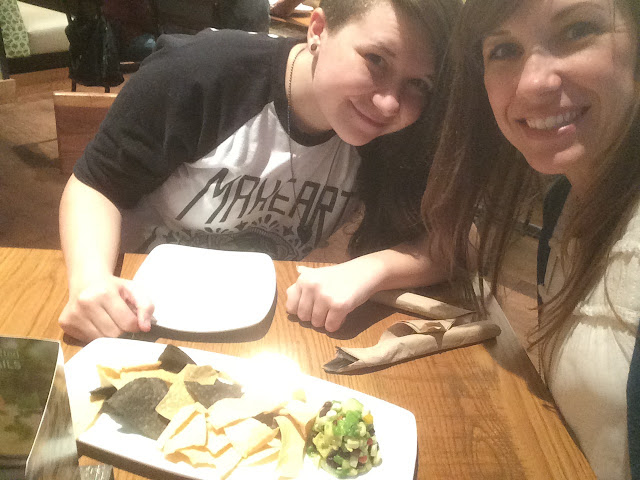 ...and picked up some dessert that we shared with Cody when we got home! {Chris was at a co-worker's house...we didn't just leave him out!} 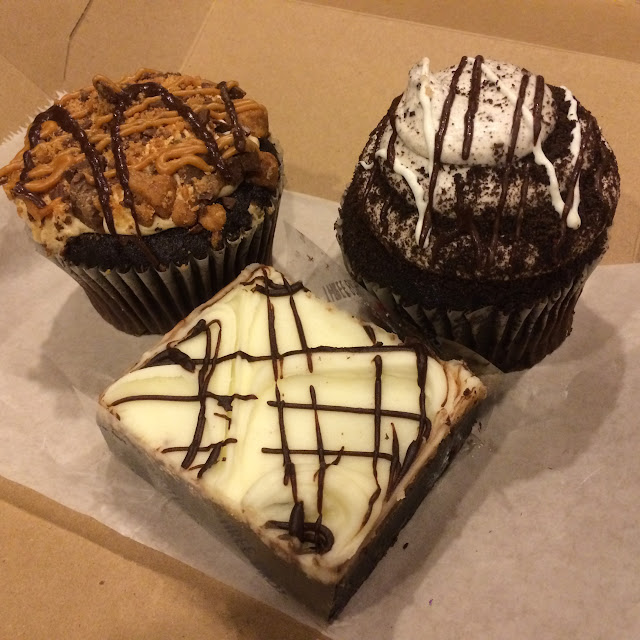 Laurien was visiting her parents on National Coffee Day, so we celebrated via FaceTime! :) 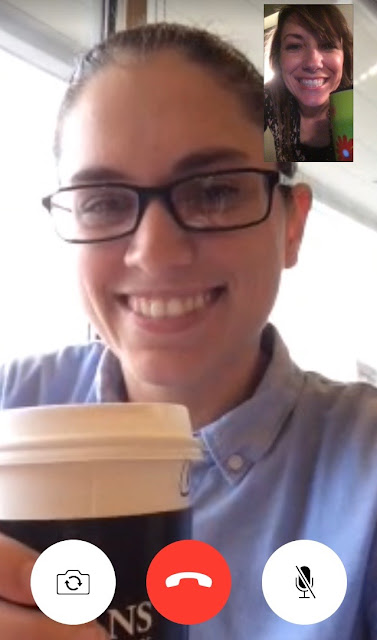 We ended up having an impromptu "girls' night" at Kristi's the other night! I had run down there to give her a check for a school fundraiser, and our other neighbor showed up just after I did. She's a new mom who had a rough day. So after giving her big hugs and reassuring her that she was not alone, we sat around Kristi's table for awhile and just enjoyed some grownup conversation. It was so nice to have that special time with them!

Friday was my first real day off since before summer! By that I mean that the kids were both in school, and there was no XC meet, so I got to do whatever I wished to do with my time! So, naturally, I scheduled a repairman at home and took Lola to the shop. Because I really know how to live it up! Ha! ;)

Christopher was at a men's retreat, and Elly was at Kiya's, so Cody and I went out for coffee after I picked him up from school! 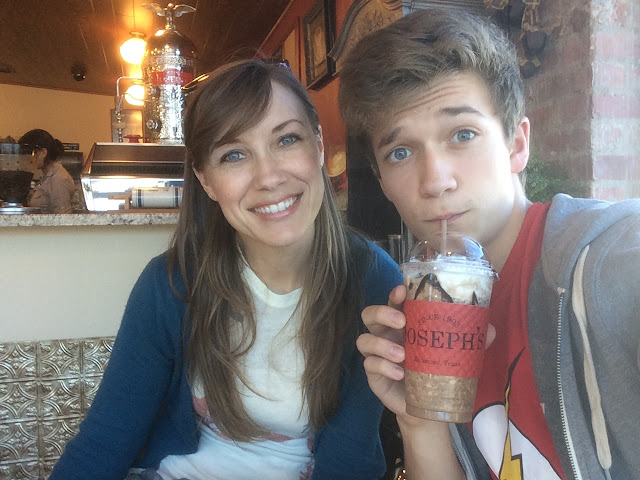 Sally was at Kristi's when we got home, so we joined their play date for a little while! 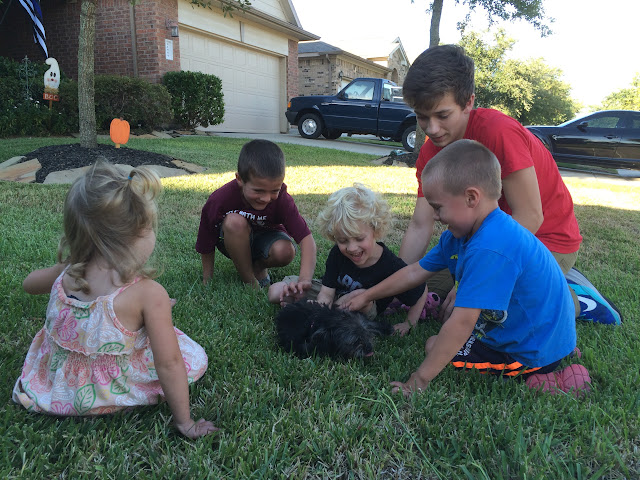 Yesterday was another chill Saturday that I desperately needed! Dulce let me sleep in a little. Then Cody had a birthday party to attend. Uncle Chris and my awesome cousin Kevin were driving through town, and I got to go to lunch with them! It was so good to see them, though I'm sorry I didn't take a picture so you could see them, too! ;)

I also made some cold brew, which is something that I've wanted to try for a long time! 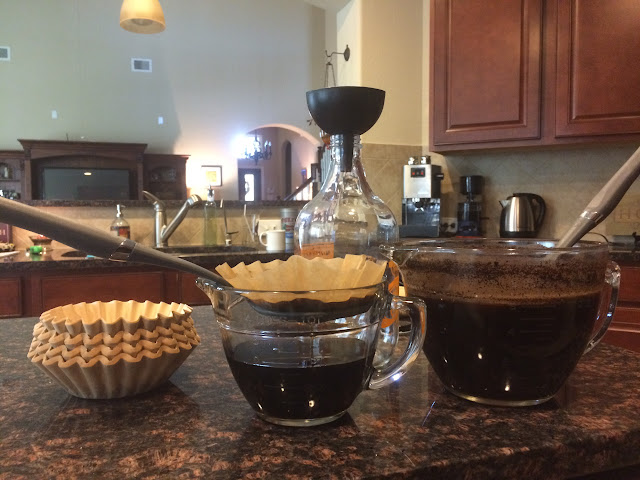 Today was a busy but good day! Chris returned from the retreat in time for church. Afterward we went to lunch with a family that we've known from the neighborhood and school (one of Cody's friends) but is new to our church. It has been nice getting to know them better. We had Community Group tonight, and our dinner was a fundraiser for one of my new small group girls. We've known Rylee and her family since she was a preschooler, and we did the Financial Peace class at her house. She was recently diagnosed with scoliosis, and it has progressed rapidly. She is scheduled for Vertebral Body Tethering in two weeks. If you or someone you know has some extra money lying around and would like to help support her surgery and travel expenses, check out her GoFundMe page!

There's no particular reason for today's song other than the fact that they were in town this weekend. We didn't see them, but some of our friends did. My baby girl would've loved to go! Maybe next time...

Alrighty, I'm hitting the sack! I hope y'all have a super great week! ♥

Brooke said…
i think you are a very wise and good mother to realize that you shouldn't be in the same group as your girl. <3
how did the cold brew turn out?
enjoying this song! you introduce me to such diverse selections.
October 8, 2015 at 8:43 AM