I thought I'd share a little bit about the trip I just took with my dad. We decided that the theme of this trip should be, "I should've taken a picture of that!" But we also had a bit of a "gold" theme, so I went with this amazing NTB song {surprise, surprise!} It all began with a skein of yarn in a shade called "Sungold", and it continued with what my dad referred to as "gold dust" all over his car. {It was actually little fibers from my yarn. I'm not sure if all yarn sheds fibers like that, or if we just happened to notice because of the sunlight streaming in. I don't know, but I'm rambling, aren't I?...} I'm sorta getting ahead of myself, but I'll go on & show you the little project I completed on the trip. You probably don't really care, but I think my "Streets of Gold" cowl turned out pretty cute: 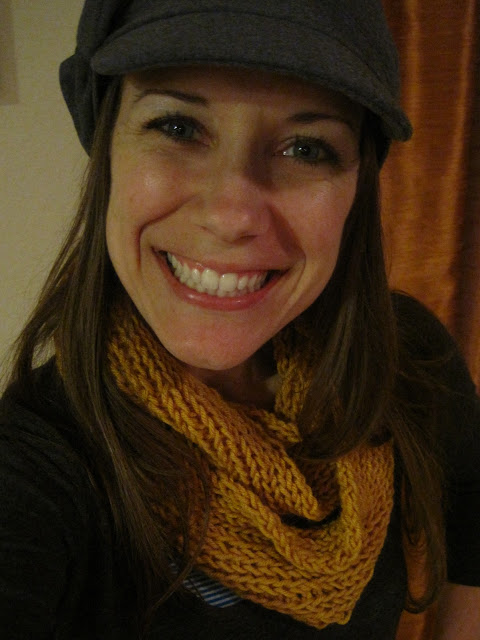 Yes, I realize the name isn't very creative & a little similar to the last one. But I figured "A place where love can't die" was a little much (though that's my favorite part of the song). There are other songs that could've worked for the knitting project AND the trip; but quite early in our journey, this song came on the radio. I think it was a sign... 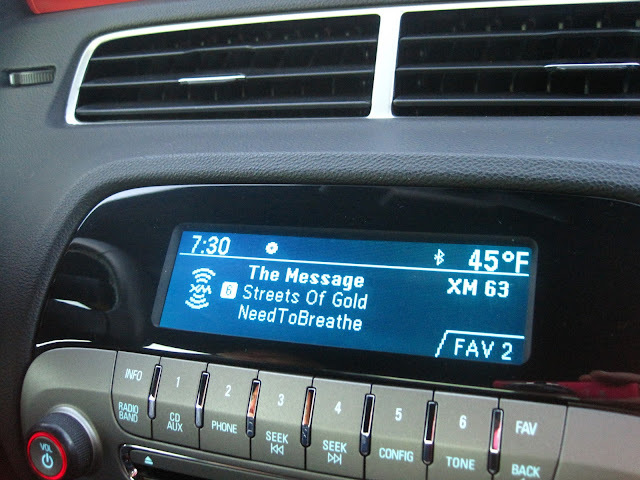 I've heard it on their second album, but never on the radio. There were other bits of the trip that contributed to the gold theme, but I'm already dragging this out way longer than I intended. What's new, huh?

I can't really tell you about the trip without sharing a bit of the added craziness that is my life...We found out on Thursday evening that Christopher's grandma (GMC) was going to be taken off all life-sustaining equipment on Friday morning. He decided to drive up to Dallas that night so he could say goodbye in the morning. He thought he might stick around until Saturday, so I called my friend Angels to see if Elly could spend the night there (with her friend Abby). Cody already had plans to spend the night with Alex, and Kristi was willing to let Pepper out on Saturday morning. Things didn't quite go as we thought. In God's great mercy, He didn't allow GMC to suffer very long. She passed away Friday afternoon, and they scheduled the funeral for Monday morning. Chris could have come home to care for the kids & driven back on Sunday night, but that seemed like more driving than necessary {though, crazy little fact: I could've driven to Dallas, back home, then back to Dallas in the time it took Dad & me to get to NM on Friday ~ crazy, huh?!} Anyways, because I have awesome friends, Angels had already offerred to keep my girl for the entire weekend, Amy was planning on having Cody the entire weekend anyways, & Kristi had already said she'd be around all weekend. So, I just had to make a few phone calls to make sure they were all game for that actually being the plan, & we were good to go. Sigh. Chris ended up getting to spend some quality time with his dad, step-mom, & baby brother {OK, he's 13, so he's technically not a baby. But if I can still call Aaron my baby brother, then Alejandro can certainly be called that, too!}

Anyways, Dad & I had a fairly non-eventful trip up. We left as the sun was rising & stopped for lunch in Sonora, a little town where my car died after it had been stolen when I was in high school. Though I'm pretty sure I've never been to that town, I still had some interesting memories of it! ;) We drove through plains, desert, mountains, & basins... 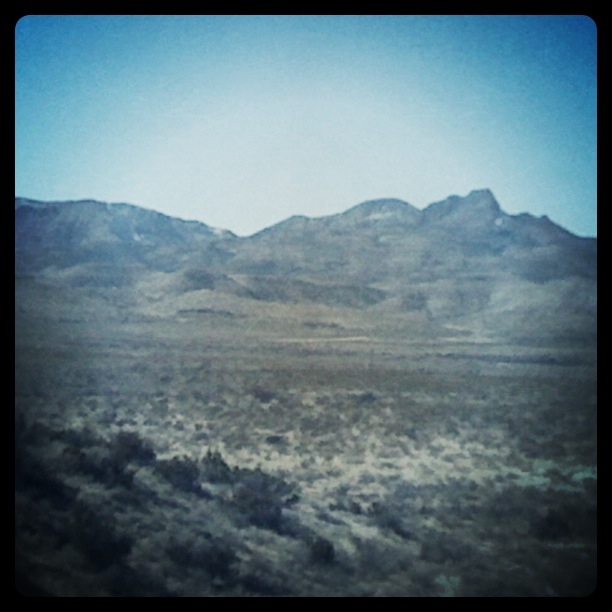 And we finally arrived as the sun was setting. 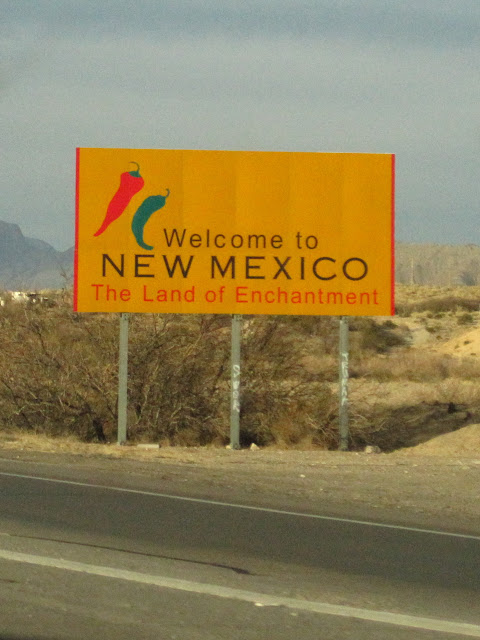 We had a great time visiting with our family at the rehearsal (& dinner afterward). We got to watch a slideshow of Brandy & Russell, and it was so cute. But it was so strange to see a bunch of pictures of a little girl who looked exactly like me as a little girl! I knew that Brandy & I resembled each other somewhat {Cody referred to her as my twin after he met her this summer!} but I really hadn't realized just how much we looked alike as toddlers. We didn't really know each other while we were growing up. She's actually my cousin's daughter, and I didn't really know my cousin very well. I'm on the tail-end of my generation of our family, and most of my cousins are around 15 years older than me. In fact, they started having kids when I was two, so I actually grew up more with that generation {first cousins, once removed? idk...} And the ones I saw the most were my Aunt Linda's grandkids, while Brandy is my Uncle Robbie's granddaughter. This may be more than you care to know, but I'll continue anyways! ;) It has really just been in the past few years (with my cousin Kim playing softball nearby, Nikki graduating, & Christin getting married) that I have really gotten to know this part of my family. I remember meeting Brandy & her sister Amanda when I was around 8, and I remember that she resembled me when I was her age (around 2). But seriously, it's crazy how much we looked alike. Dad & I couldn't get over it! If you had told me that it was me in those pictures, I totally would've believed you! I'll have to find some pics to post some time. It's not as obvious in this picture of us now, but I think you can tell we're related: 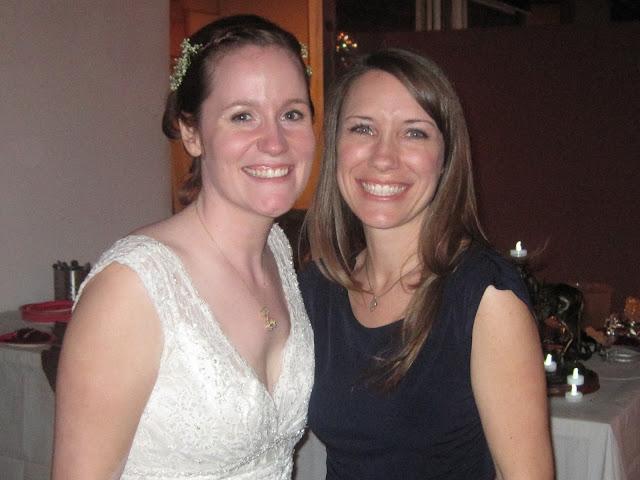 Anyways, we stayed at the hotel where the rest of the family stayed, so we got to catch up with everyone there. We also got to meet Russell's family. Some of them had driven in from California ~ as far as 20 hours away! I thought Dad & I drove a long way! The wedding was nice! It was real laid back, which I think is super. I sat with my cousin Ginger (Brandy's mom) at the reception, and I enjoyed getting to know her & her husband a little better. As I've mentioned before, my camera isn't so great. So I didn't take very many pictures. I did get this one of the bride & groom: 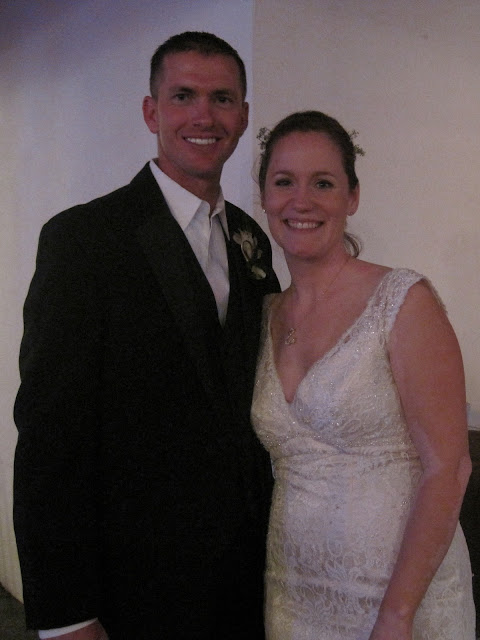 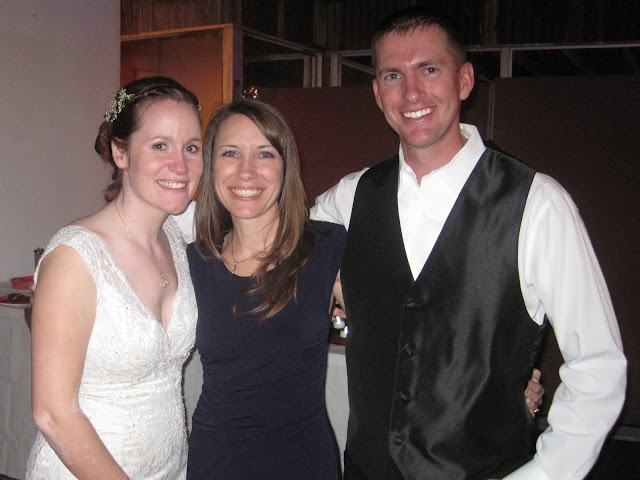 There's really no point going into any details of our long drive home, but I'll close with this bit of randomness: 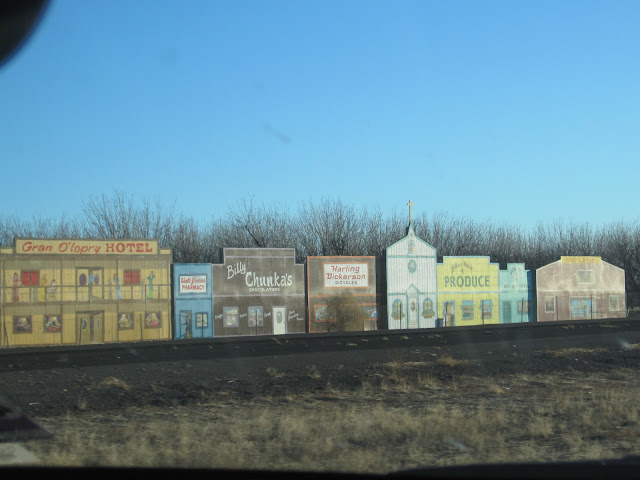 A fake little town?! There's actually a real gas station & convenience store in the midst of the pretend buildings... 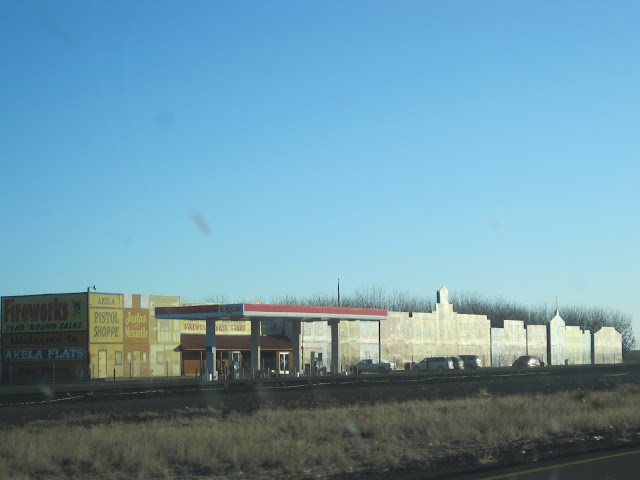 Alrighty, I've rambled on enough for today, but I'm going to post this as is. If you're still reading at this point, you really are a true friend!