As most of you know from fb, Christopher's scans were clear! My only bit of concern was that he mentioned a spot on the liver that we had been watching, but it was the same size as his last scan. I had no idea that we were watching a spot on the liver...I'm guessing the radiologist was watching it, but maybe Dr L hadn't read the radiologist's notes last time? Whatever the case, it hasn't changed so I shouldn't be concerned! What's super great is the fact that the doctor is totally fine with scanning again in six months (well, actually five, because we already have an appointment in July, and his MA wanted to keep it then). At first he asked if we wanted to move it to yearly, but Chris said that Dr B suggests that we keep doing them every six months for a few more years. Dr L accepted that and went on to say a few things about some promising drugs in the melanoma field. I was going to explain a couple of things here but realize that it wouldn't really mean anything to y'all! Just know that the things he said were evidence that he has done his research. Though I know that there are better doctors out there for OM, I am fine sticking with him for now. As always, thank you for your prayers!

One cool thing happened while we were waiting to get checked in at the hospital...I looked up to see my high school classmate and bridesmaid walking by! In the few seconds that it took my brain to process that it was indeed Kim, she saw me and said my name! She was headed upstairs to see a patient, but she made sure she had my number so she could call me afterward. She ended up calling just after Chris had been taken back for his scans, so she met me in the waiting room and sat with me for a little bit. It has been quite a few years since we've seen each other, so it was great to catch up! :)

The rest of my week was pretty normal...work, Growth Group, chiropractor, track carpool, driving practice with my baby girl {though I must say that does not seem normal!!} and church. I also had a coffee date with my mister, did a little bit of work in my yard, hung out with Laurien {+ a bit of bonus hangout time with Nicole!} and met with my girls for discipleship group.

I don't have any new pictures to show you this week, but I'd hate to disappoint you by not having something for you to look at! Some old church directory pictures were posted on facebook by a lifelong friend who attended the church where my family went during my early years, so I thought I'd share my family picture from 1977: 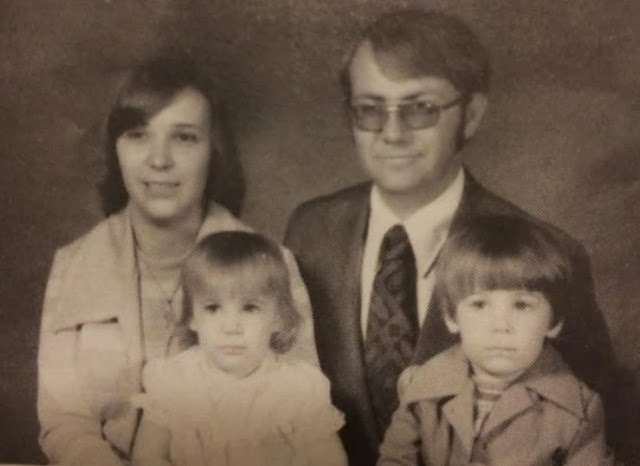 {We're all so happy to have our picture taken, huh?! And yes, I look like my mom!}

Today's song is filled with so much goodness!! It really speaks to my desire to abide in Christ. In seeking Him, I find Him. And knowing Him, I can't help but love Him. I definitely need Him when I'm in the midst of trouble. But when I am satisfied in Him, I find that I need Him even more because I realize that I can't do anything without Him. And I certainly can't do anything for His glory without Him! I don't know if that makes sense, but I hope it does (to a degree, at least)! I'll close with my favorite lines:

P.S. Natalie, I tend to use the word "so" a lot, too! :) I felt like your usage was normal!
Email Post
Labels: AS&D update Weekend Wrap-up

Zion said…
Thanks for the affirmation. I miss seeing your comments! That is not a plea for you to have to comment on my blog, I know you have been busy! I'm just so used to seeing you on there that it's weird not to. :D So glad to hear all the updates about Chris and how funny and great that you saw your friend there.
February 25, 2014 at 10:42 AM