This has been SUCH a great week!! I had two girls' nights in a row, which was a super way to start the week! The first one was with the ladies from church, when around 35 of us gathered at one of my favorite places to eat. Marcie & I shared this delicious dessert: 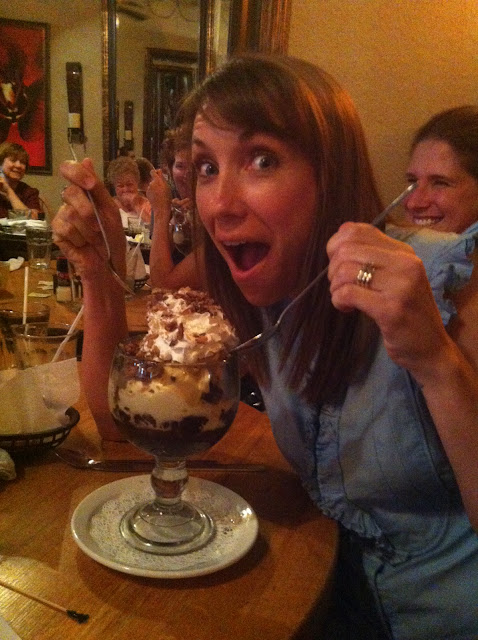 The next night, I got together with six of my favorite girlfriends! We went to Fadi's for dinner, then we went to one of their houses for dessert. We had fondue, which was delicious! {I mean, seriously...all kinds of good stuff dipped in chocolate?! Yes, please!} We also played a little Song Burst, which is a singing game {that we never actually play by the rules, but it's fun that way!} And of course there was a lot of laughter! :)

As I already mentioned, we also had our in-town mission this week. It was supposed to be Thursday through Saturday, but we finished early! Most of the projects were done, so only a few people went back today in order to finish what they were working on today. I didn't really have much of an opportunity to interact with people, but I'll still do a separate blog post about it one day next week. {At least, I hope to find the time...My brother-in-law is visiting for a couple of weeks, so no guarantees!}

So we're a few weeks away from Christopher's scans, and I thought I'd let y'all know how things stand. We're currently losing this round of the Pre-Authorization Game, but I've gotten pretty good at guessing the outcome based on the size of the envelope. If it's letter-sized, it means it has been authorized. Anything larger than that means it hasn't. The envelope is larger because they put a bunch of papers explaining the appeal process, and one time they included an explanation of why it was denied. But it doesn't really matter this time, because Christopher's company is changing insurance providers right before scans are scheduled to happen. Chris spoke with the new insurance representative at a meeting this week, and she wants to help him keep the date that is already on the calendar. I have no idea what the new insurance company's policy is regarding ocular melanoma, and I have no idea what this lady can do to help. But we'll see. I really hope we're able to keep the date in early July, so that maybe we can have them again in December. It just works out a whole lot better for us financially (since he will have already met his deductible). They may not even authorize scans after the five-year mark, though, so it may not matter. Anyways, that's what's going on right now. I'll keep you posted as things develop!

Regarding today's song...I just can't help it. We listened to a lot of NTB at The Warehouse & while we worked on projects over the past couple of days. One of the men said that NEEDTOBREATHE must have been an unofficial sponsor of our mission trip! ;) I don't really know why this particular song was listened to the most, but I'm glad it was something I haven't already posted!

Alrighty, I've got to get some sleep! I hope y'all are having a great weekend! ♥

Zion said…
The girls time sounds awesome! But the scan business sounds stressful :( I just don't understand why he shouldn't be able to receive all the scans as the Doctors schedule them. I will be praying!
June 22, 2013 at 11:31 PM