"Today Was a Fairytale"

I'm sorry to disappoint the 5 of you who were anxiously awaiting my Saturday post! I ended up with a house full of people until pretty late. Then, I still had to make a cake for church today. I was completely exhausted after that, so I figured y'all would forgive me for going to bed without posting!

This was an pretty busy week, but I forgot to take pictures of it all! While our a/c wasn't working, it was actually nicer outside in the evenings than it was inside. So, we ate dinner on the patio Monday night! 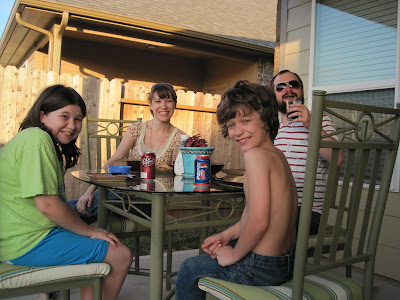 We finally got together with our good friends Dan & Amanda on Thursday night! Dan was the drummer in the band that Chris played bass in (when we moved to Houston). We used to see them at least once a week, but life got crazy! Amanda is about 8 months pregnant, & I hadn't seen her belly in real life yet! We had a great time with them, eating at our favorite empanada place & hanging out at our house until way past bedtime! But, it was so great to see them again!

Yesterday, a bunch of my extended family came over! My aunt, a couple of cousins & their spouses came in from New Mexico & the panhandle of Texas, as well as my dad, brother & his family from across town. If you can believe this, I was able to feed 15 people for about $15! I made my homemade spaghetti sauce (using canned tomatoes that I got for super cheap ~ thanks to coupons & great deals at Kroger!), salad, homemade biscuits (that taste like Red Lobster's Cheddar Bay Biscuits) & super yummy banana pudding (both regular & sugar-free for my dad, who is diabetic). Unfortunately, I forgot to get the camera out while the family was here, but how scrumptious does this look?! 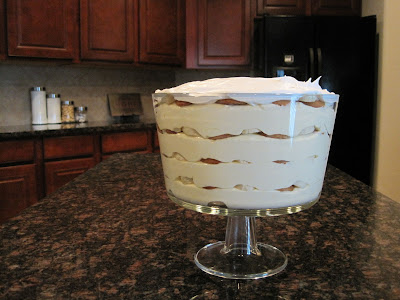 I finally got around to touching up some of the paint in Cody's room this week! I feel terrible that I haven't finished it yet, but it's quite the daunting task. The mistakes on the edges are way more obvious in his room than Elizabeth's (with all the white paint). It is SO discouraging to try fixing it only to mess it up worse! So, I just kept putting it off until this week. Though it isn't completely touched up, it's done enough to post a couple of pictures! 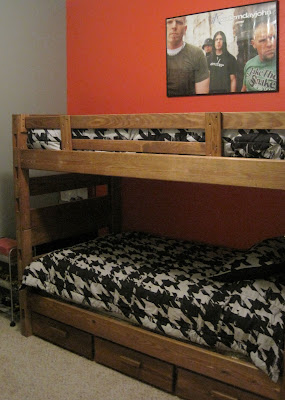 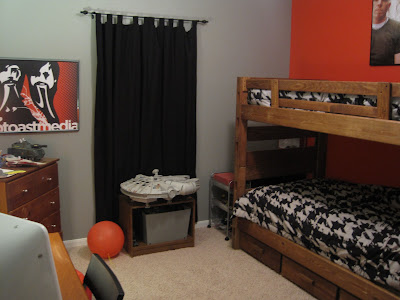 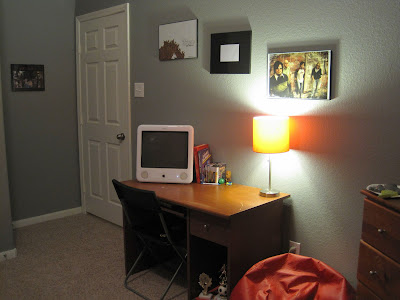 I almost forgot to reveal the truth from my last post! I know nobody will believe this, but it's actually #1! It was a teen night club, but you had to be 14 to get in. It was Spring Break, & I went to Galveston with a friend who loved to dance. I didn't have the first clue how to dance, so I just watched her & tried to mimic what she did! I'm sure I looked like a fool! As for #2, I never babysat them, though I did know their dad & talk to their mom a couple of times. They could've been at my wedding, but they were on a family vacation instead! :/ I totally wish the 3rd & 4th were true, I grew up with a guy with the 5th (& secretly wished I had a cool birthday like that, too!), & the 6th was almost true (but there isn't actually construction right behind me)!

As for the song, I just really like Taylor Swift! There's nothing in particular about this one today. I hope y'all had a wonderful weekend!