(by Selena Gomez & The Scene)

As I mentioned yesterday, I haven't listened to my iPod much this week ~ but, Elly & I heard today's song at least 4x in less than 24 hours on Radio Disney. Add that to the numerous times that the video was on the Disney Channel this week & the constant replay in my head, & it is definitely the song I've listened to the most this week!

We have some good news regarding Christopher's vision! Though the blood was removed as a result of the vitrectomy in January, there had been no improvement in his visual acuity. We weren't sure that Chris would ever regain vision in his affected eye. As his last hope, he received a steroid injection about a month ago. It didn't seem to be working, but we found out differently at his doctor visit on Thursday. They used the pinhole mask & found that his acuity has actually improved to 20/100. He hasn't noticed an improvement, but the fact that it actually has improved (however intermittent) is encouraging.

I've had quite the productive week, considering the fact that I completed both of my projects around the house! If you haven't seen it already, check out my last post for a picture of the patio table. & below is my framed necklace holder ~ or whatever you call it! I spent between $1-$3 on each knob, less than $3 on the fabric, & I already had the frame. So, the whole thing was about $10! 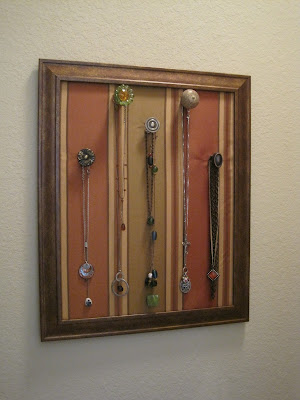 Well, I better get to bed, because I feel quite hot & grouchy. Our A/C isn't working properly {& seeing as it was only 80 degrees outside today, it's not considered an emergency ~ so I don't dare call that number! I'll just wait until Monday to have the builder send somebody out to look things over.} It feels better now that the sun has gone down, but it was so stinking hot earlier today when our friends Rob & Misty were here. So, of course, we had to have ice cream to make things more tolerable! If you can believe this, I'm going to bed without a nice hot bath {because tonight that doesn't sound so nice!} I'm praying for a cool night & that I can endure the blow dryer in the morning (I'm totally moving the oscillating fan to the bathroom when it's time for that)!

Brooke said…
great news about his vison. hopefully he'll be able to see the healing in the near future
April 5, 2010 at 9:52 AM