"Have you ever heard of The Throes?"...That was Christopher's pick-up line. I bet you haven't heard that one before! It was the end of April 1995, & I had been going to the same church as him for about 8 months. I had met his mom, dad & the twin cousins that his family was raising, but I only knew him as the guy who played bass. About a week or so before the pick-up line, a group of us had gone to Six Flags, and he seemed like a pretty nice guy. We were both volunteering with the youth group, and that particular Wednesday night after church, he really started talking to me. He showed me the engraved pen he had received that day as a manager at Whataburger. He ended up leaving it with me while he jammed with the drummer, then he came back over to the concession stand where I was. When I tried to give his pen back, he wouldn't take it. He said it was an excuse to come back & talk to me. At one point, he was talking to our good friend Geary, and I tried to give his pen back again. He was conveniently busy getting a Dr Pepper, so he didn't take it, & I said, “Oh ya, it's an excuse to come back & talk to me”. {And about 5 years later, I found out that Geary thought I had started the flirting!}

As we were all walking out to our cars to leave, Chris asked the question about The Throes. We ended up sitting in his car for hours, talking & listening to music (and I promise, that's ALL!) At about 1:30 am, the youth pastor (whose family I lived with) drove up. He was concerned about me, because I was never that late coming home! We had no idea how late it was! All of Christopher's friends couldn't believe that HE had actually talked 'til the early hours of the morning. Apparently, he wasn't much of a talker, but I would've never known!

He asked me out the next day, and we spent the next few months seeing each other as often as we could. I worked two jobs during the day, and he worked at night; so we would stop by each others' places of employment whenever possible. If we weren't able to see each other, we would leave notes on each others' cars! When his mom (who had been sick since he was little) went back into the hospital, a lot of our “dates” were spent there with her. We got engaged in August, about 3 months after our first date! I know that seems fast, but we knew that we were meant for each other. We were talking about the future, and we knew that we wanted to get married the following summer. We figured it was easier to plan a wedding if we were engaged, so we got the rings & started planning!

I've scanned some pages from the album that I made Christopher for our 10th anniversary, so some of those pages will be in my "Through the Years" posts. Below is one of our engagement pictures. 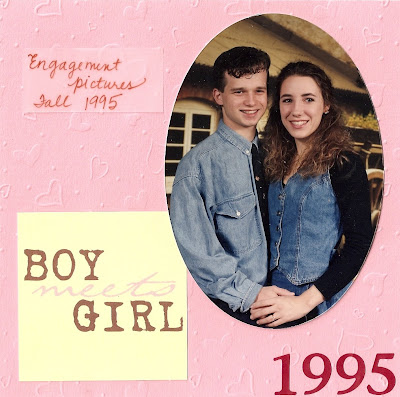 Anonymous said…
I'm so excited you are participating! And I am also loving all these short engagements. It seems to be a trend with all these Christian women! :)