"Jesus in Your Eyes"

Love is patient love is kind
Love comes thru every time
Always protects, hopes and trusts
Keeps on believing and it never gives up

Chorus:
In my life I have seen so many things
But nothing has touched me so deep inside
As when I see Jesus in your eyes

1996 started out pretty bad, but ended well. On February 13th, Christopher's mom passed away after suffering kidney failure 14 years earlier. She was only 36 years old. Mama Beth was a very special woman, and I had looked forward to having a mother-in-law that I got along with. Shortly after her death, Christopher's twin cousins went to live with their father. They had been raised in his home as his sisters for almost 6 years, so it was very hard to adjust to not seeing them every day. Chris became an uncle in April. It was fun being around Brandy and her baby, Joseph. Our church went through a split, and that was pretty stressful (sorry, this is the bad news paragraph, but it's almost over!). The pastor was forced to resign, and about half of the church left, including the youth pastor. As a result, though, Chris ended up becoming the youth pastor. He was still in Bible school at Christ for the Nations, but since we had less than 10 youth left, he was able to sort of ease into the role.

We got married on July 27th. The song I posted today is the song that we sang to each other at our wedding. Brother Jerry, my pastor from high school, officiated. We had three attendants each: Charlie & Muffi (the youth pastor & his wife that I had been living with) were our Best Man & Matron of Honor, then our friends Geary, Kasey, Corey & Kim were our groomsmen & bridesmaids. My baby brother Aaron was our ring bearer, and we had three flower girls. Aaron walked with little Rachel (my precious friend from Weimar, who is like a little sister to me), and Danielle & Desiree (the twins) walked together. They were all so adorable! My Dad sang “The Wedding Song (There is Love)” during the lighting of the unity candle. We did everything in a pretty traditional way, except we walked out as husband & wife to the funky electric pop song from a couple of posts ago (“Every Boy & Girl Falls in Love”). It was great! Christopher's dad paid for our honeymoon, and we could've gone to Cancun or something; but we were fairly young (20) & afraid to go out of the country by ourselves! So, we went to Walt Disney World, and it was so fun!! 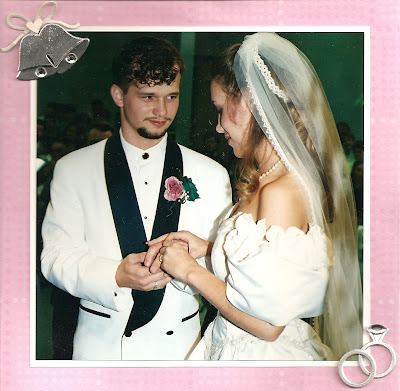 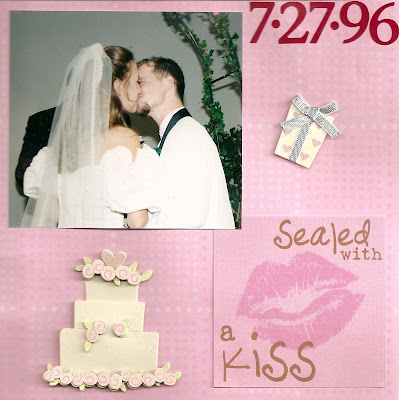 For the rest of the year, I continued to work, Chris continued to go to school, and we just enjoyed being married! We lived in an apartment on campus, where we met some really great young couples that we hung out with whenever we got the chance. We hosted the College & Career group from church fairly often. Plus, we babysat Joseph every other Saturday, while Brandy was in school. It was so much fun! People say that the first year of marriage is the hardest, but it really wasn't for us. Things weren't perfect, but it was a breeze compared to the 6 months prior to our wedding.
Email Post
Labels: family MMM Through the Years

Anonymous said…
My daughter is getting married in June and I have look all over for this song and your blog is the only place I've found it. Is there any way you can share that song with me? My name is Teresa my email is tyoung16@yahoo.com
I would greatly appreciate it.
April 7, 2009 at 2:27 PM

Anonymous said…
What a great story, even though there were some hardships!

You were a beautiful bride!!!

Sisters Blog said…
My husband and I will celebrate 25 years of marriage in 2 days, July 27. We were married in 1985. We also had this song at our wedding. Two of our dearest friends sang it to us. We had wanted to renew our vows this year but because of an illness, we were just unable to pull everything together. I find it very interesting that we were married on the same day as you and had the same song. We had the song originally on cassette tape but it is so worn that it barely plays. Is it possible to share this with me. Just listening to it brings me to tears. The song is very prophetic. God Bless you. You can email me at ceyates@cox.net. With much thanks, Connie Yates.
July 25, 2010 at 7:13 PM