The lyrics of today's song aren't really fitting, but we're going with it because... 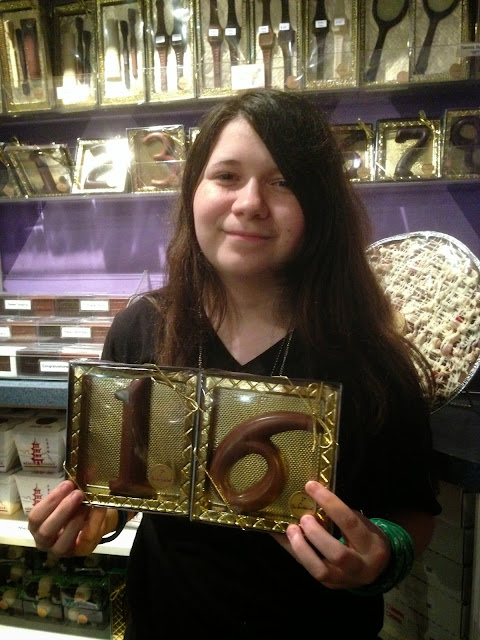 And because 16 is kind of a big deal, we had decided to take a few of her friends to The Chocolate Bar in addition to the usual sleepover. Cody ended up getting sick the night before the sleepover, which was horrible for him and for the sleepover situation. I didn't know what to do, because I didn't want it to ruin Elly's birthday. But I certainly didn't want any of her friends to end up with a stomach bug (& I'm sure her friends and their parents wouldn't want it, either)! Christopher had the great idea for us girls to stay the night in hotel, and Elly's birthday turned out to be a way better celebration than we had originally planned!

We started out the evening at a yummy pizza place in Houston... 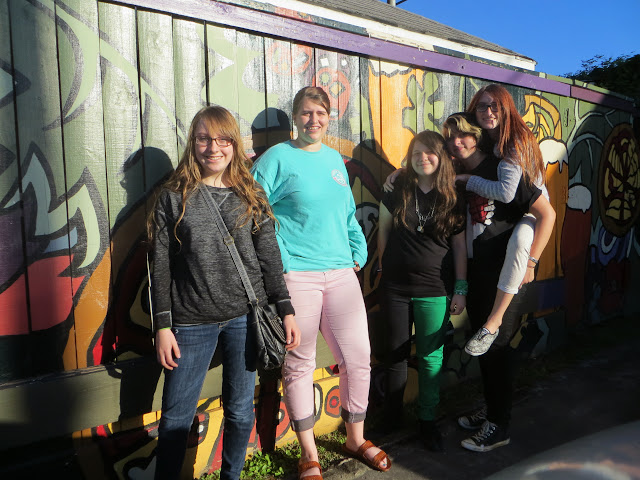 Since nobody had room for chocolate quite yet, we went to the Galleria for a few minutes and took pictures at the Waterwall Park... 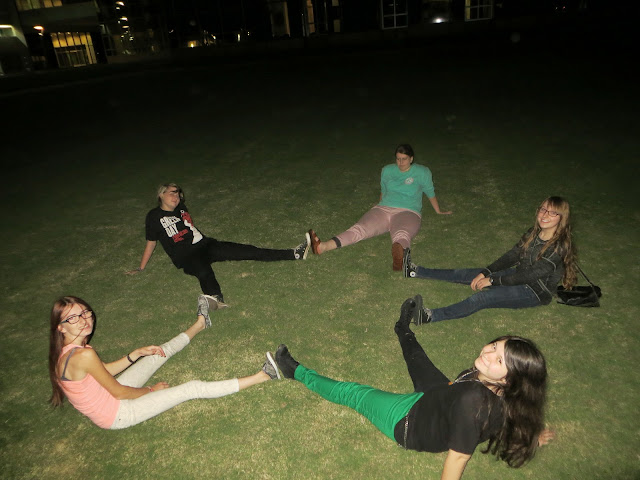 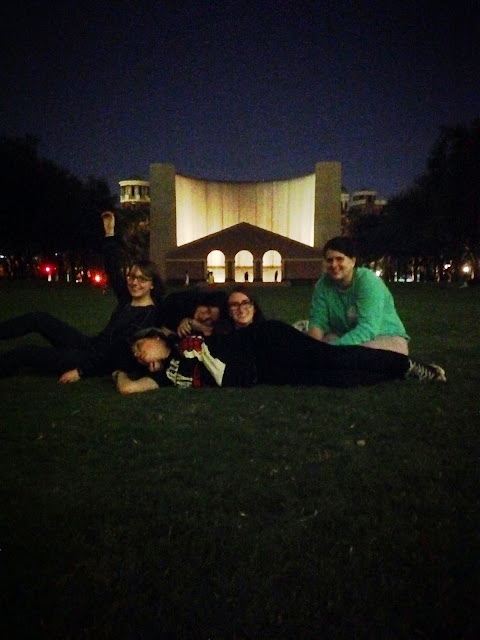 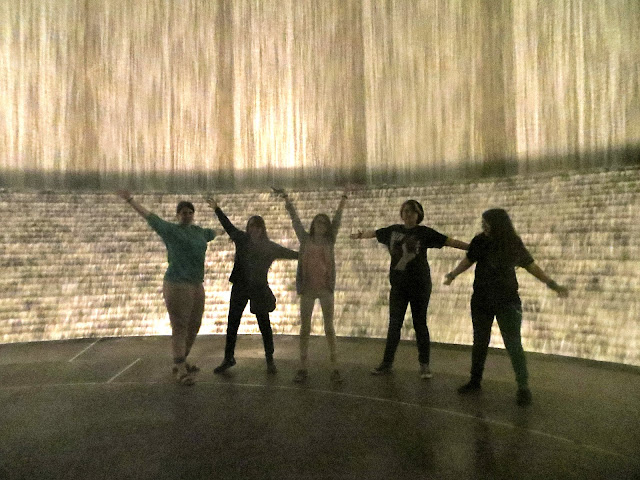 Then we indulged in chocolate as originally planned... 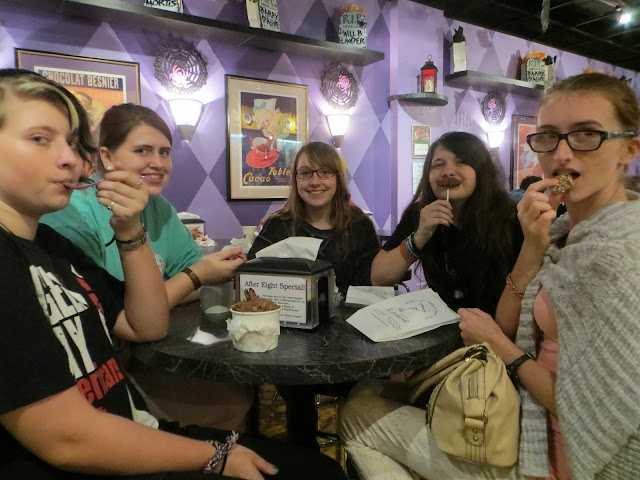 ...and discovered LOVE on our way back to the van! ♥ 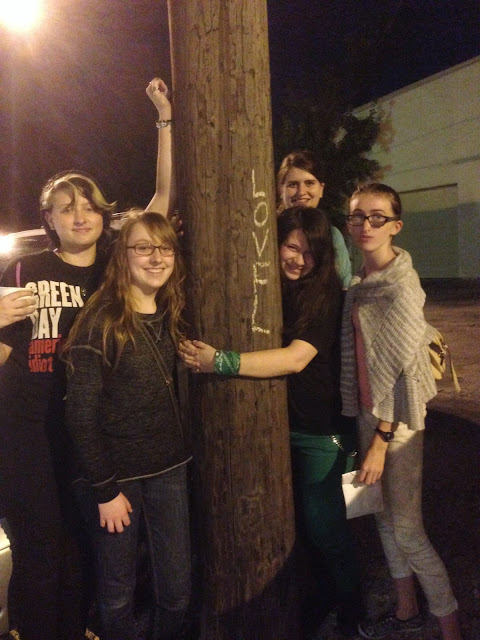 When we got to the hotel, Elly opened her presents! 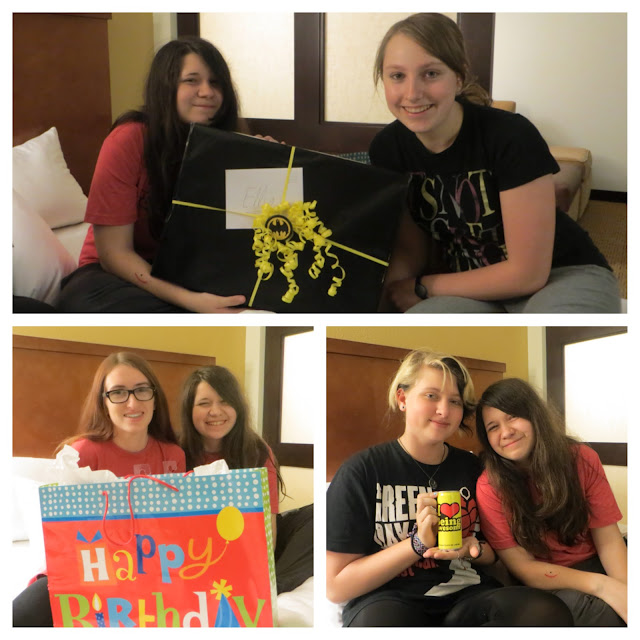 We toasted Elly with one of Kiya's gifts, which was a soda that said, "I ♥ being awesome!" ü 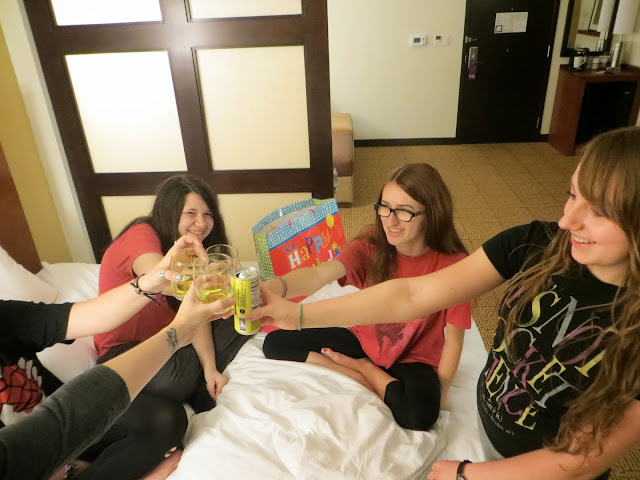 I ended up with my own little space where I wasn't all up in their business! In the picture above, you can see a partition separating my space from their's. I had a nice big couch and ottoman where I settled in and watched India videos on my computer! :) 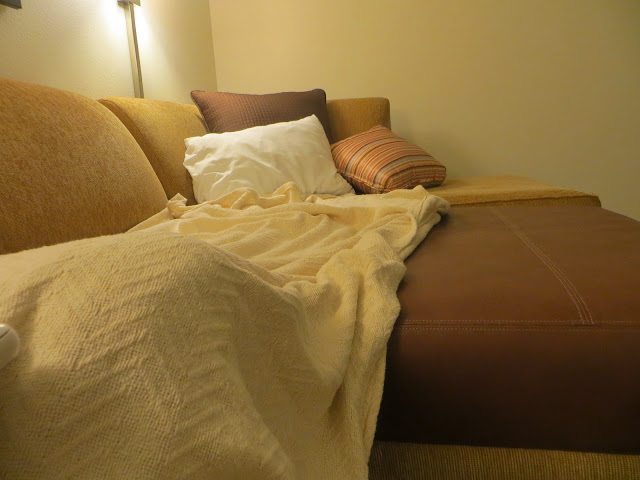 In the morning, we enjoyed breakfast at the hotel and hung out in our room until it was time for us to check out... 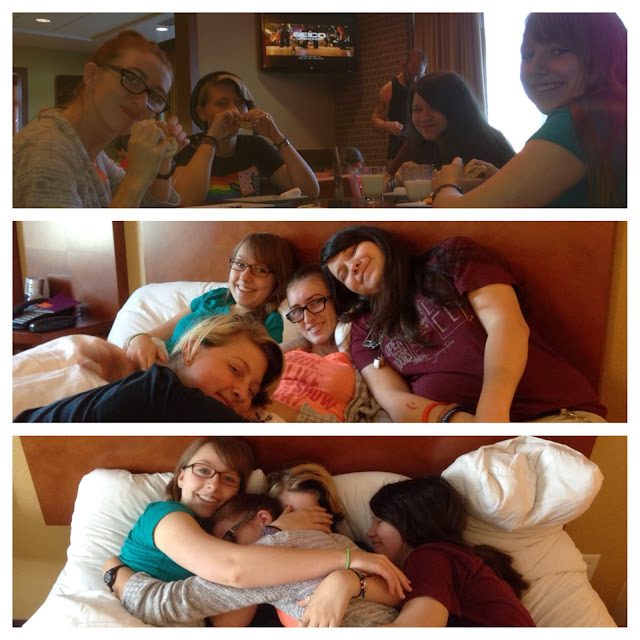 After taking the girls home, Elly opened her presents from us! She got a Grumpy Cat from Cody... 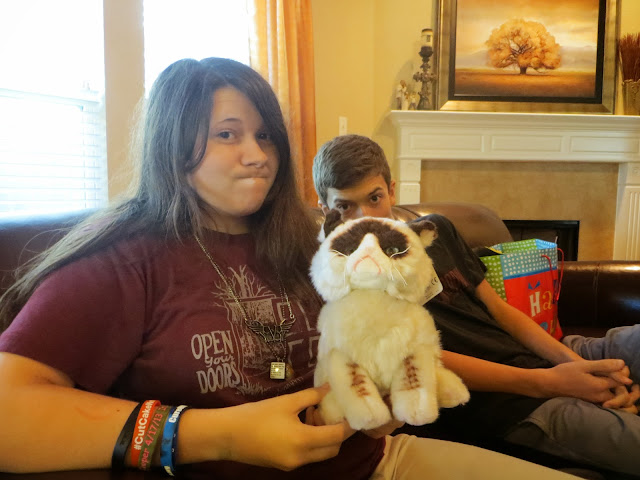 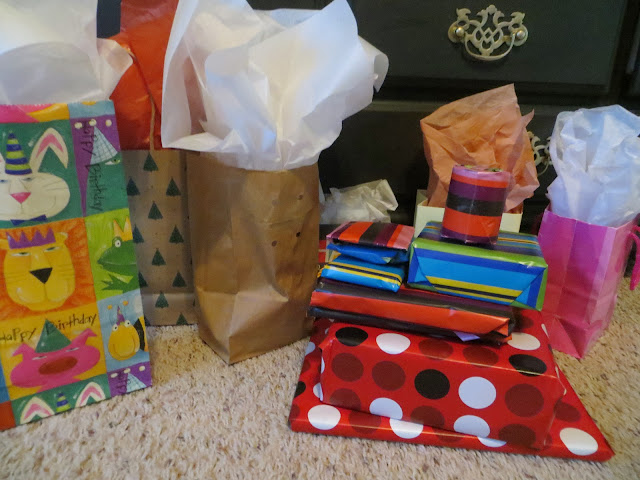 Most items were random little favorite things of hers like beef jerky, Sour Patch Kids, Duck tape, socks, and a coffee mug. We are going with her to pick out a new guitar, and we also gave her the keys to Silvie! 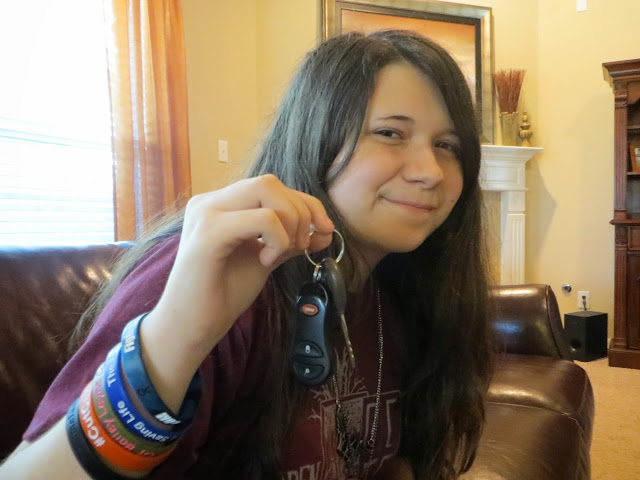 {though not technically as a gift, because she's known about it for years}

For her birthday lunch after church today, we went to The Melting Pot!! 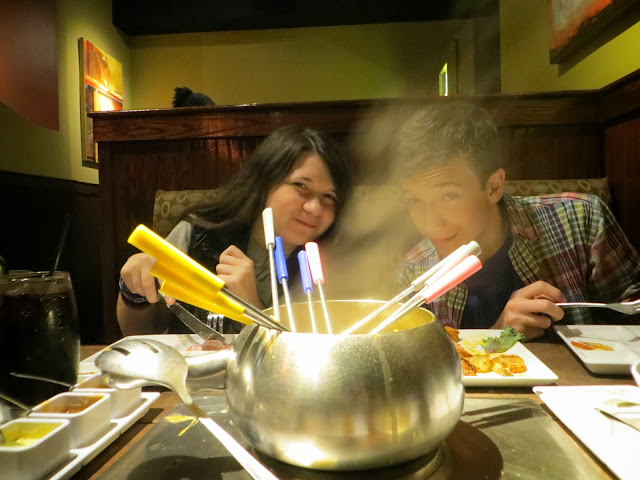 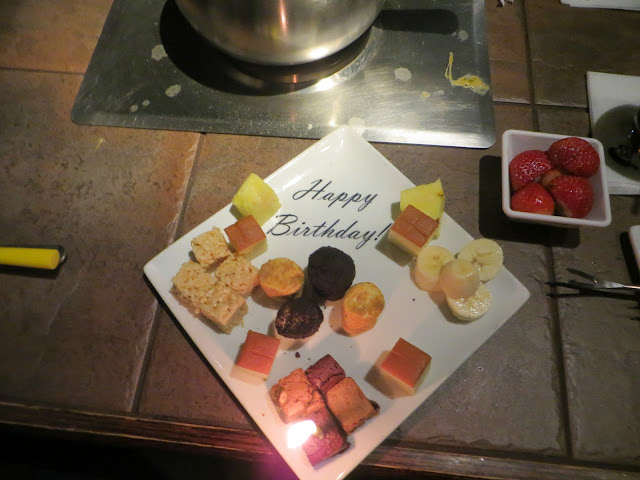 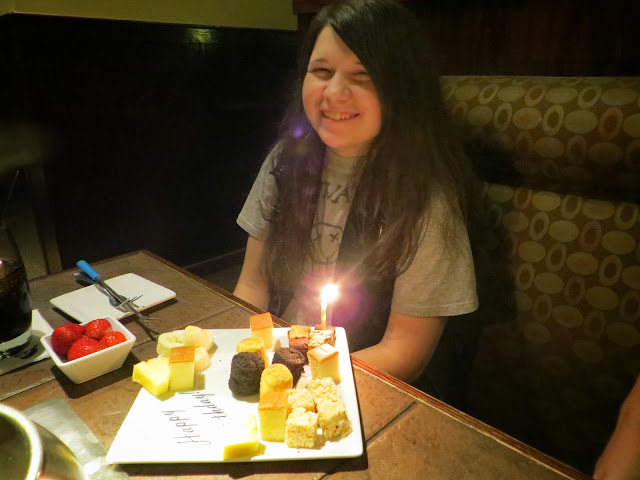 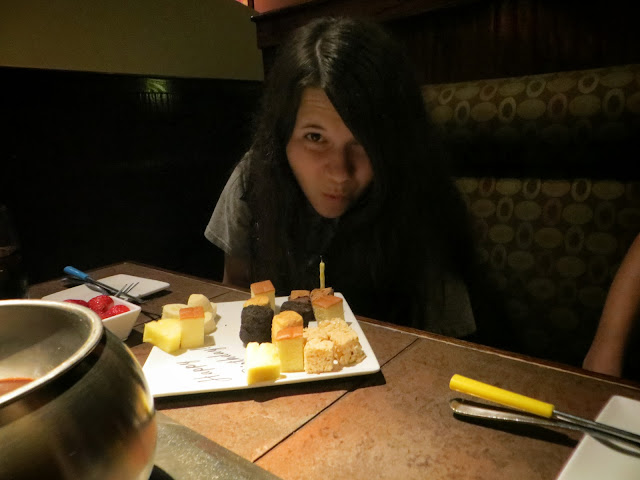 We had a wonderful weekend celebrating Elly's Sweet Sixteen! ♥