I'm sorry I haven't posted in such a long time! I've just had a lot going on these days, and Elly seems to be using my computer for school or driver's ed every time I'm free to blog. I think that's a little more important, no? If I can be completely honest with y'all, I had an emotionally draining week last week. I'm not going to bore you with all of the details, but it was rough. And it's part of the reason why I didn't post last weekend. I haven't said much about my mom lately, but she is not doing so well. My step-dad (her sole caregiver) needed a break, so I took care of her over the weekend. It's hard to see her that way. In addition to that, Lance has responded to God's call to plant a church, and his last day at our church was last Wednesday. To say that it was difficult for me is an understatement. I don't like change...have I mentioned that? And there seems to be a lot of it right now! They're even changing Kroger, which may put me over the edge! ;)

On to happier subjects now! Here are the highlights of my last few weeks...

Awhile back, I had been telling a couple of my girls about a delicious caramel and chocolate-covered pretzel that my co-worker had shared with me. She had gotten some at a wedding, and they were made to look like a bride and a groom. They were super cute! Anyways, I got to work the following Monday, and Grace had left this on my desk for me: 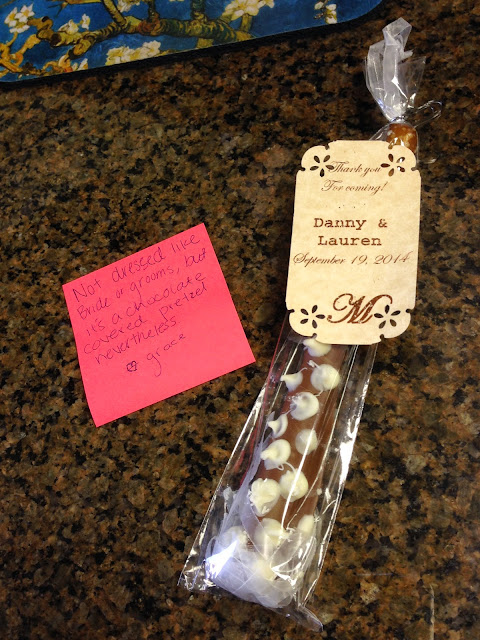 I thought this was a sweet picture of Cody helping his sister with Geometry :) 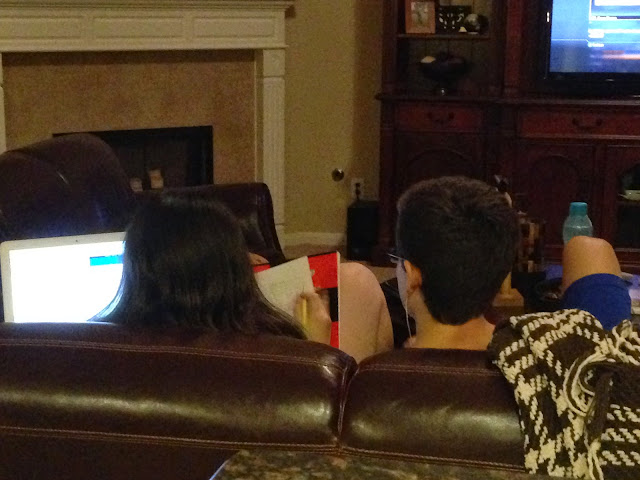 My pup is adorable, so I thought you'd like to see her posing on the bed that she thinks I made for her: 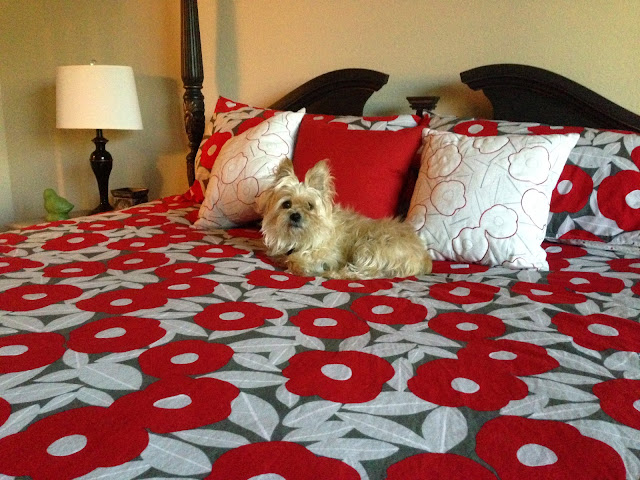 Speaking of Pepper, she got out of the yard a couple of times last week. I didn't realize that the gate latch had issues and had allowed the gate to blow open. Fortunately, she showed up at the front door both times she got out! The first time it happened, I wondered if she had gone on an adventure. About an hour later, I saw this on facebook: 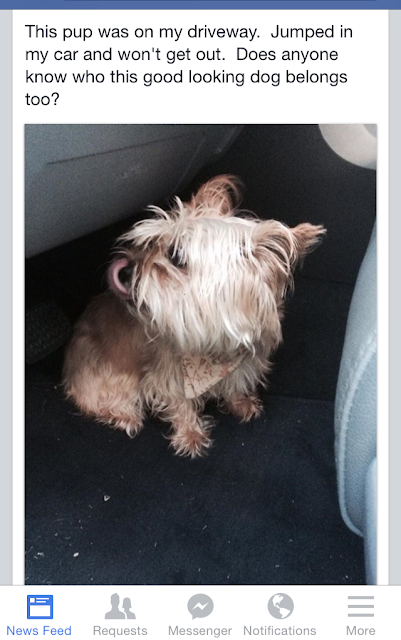 She had wandered a couple of doors down. I have no idea why she jumped in my neighbor's car, but she jumped out when Jenny tried to check her tags and came home fairly quickly. I have no idea what happened the second time she got out, but she showed up on our door step. I'm glad to know that she knows where we live and will come home, but I'd rather her not escape!

In random news, I happened to have the coolest grape ever and thought some of you may appreciate its artwork: 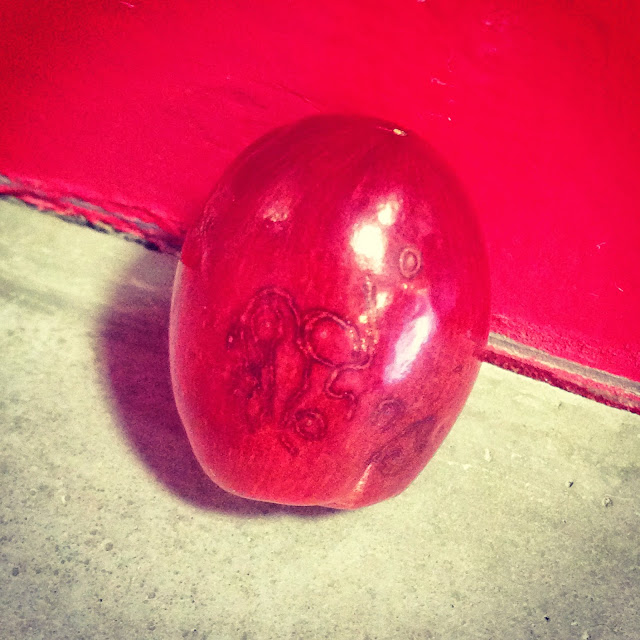 My sweet boy won another cross country meet! His trainer (who is Elly's health teacher) thinks he's a stud and talks about him in Elly's class! Apparently she hears the girls talking about him & will see them accidentally bump into him, but he's oblivious. Ha! I don't have a picture of Cody with her, but here he is with Coach K: 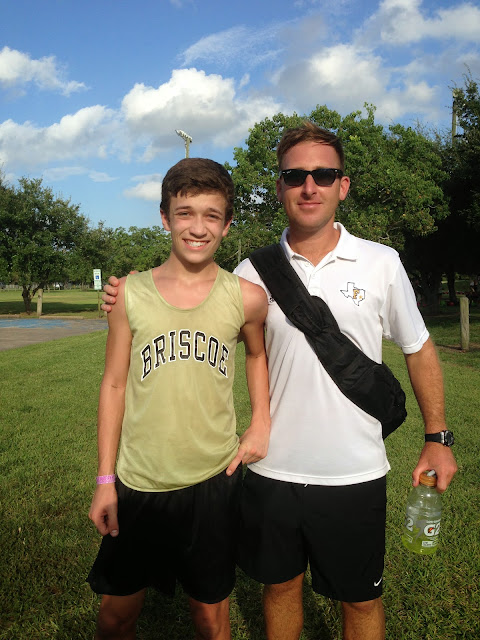 Cody came in second in his race on Friday. The guy who won was a senior in high school, so we're cool with 2nd place! :) 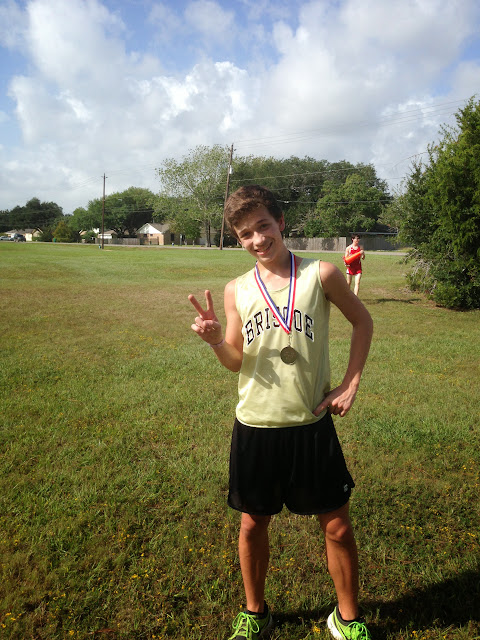 Laurien & I had a belated National Coffee Day get-together. We had some great conversation and decompression, and it was the best Caramel Macchiato Latte I've had in a long time! 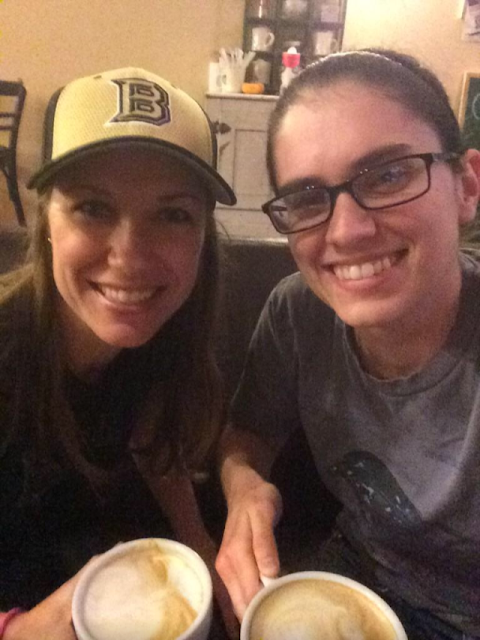 Speaking of Laurien, she cooked us dinner last night! We had delicious meatball subs, and we made Ferrero Rocher cupcakes! 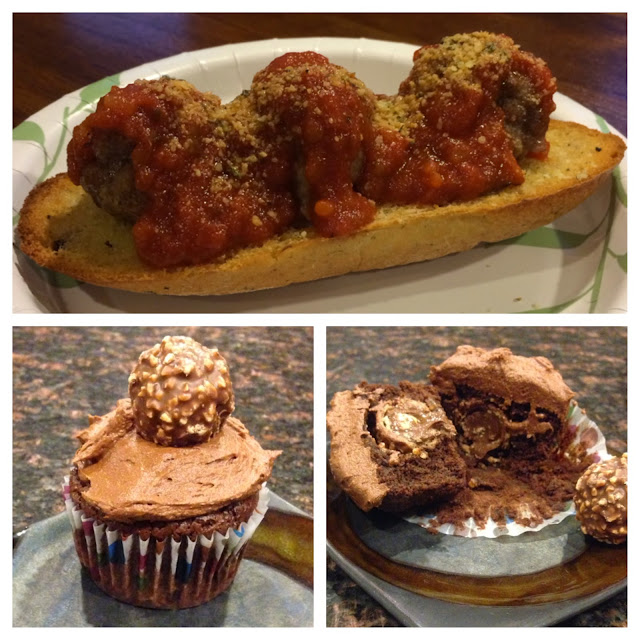 National Night Out was on Tuesday! We hosted with Ryan & Kristi again, as we've done every year since we moved in. 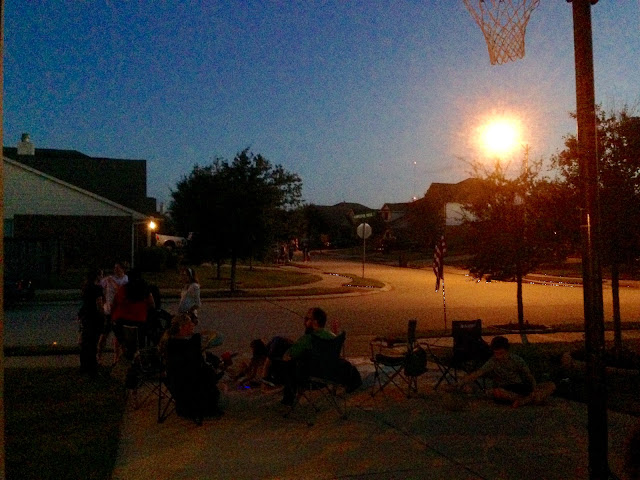 The kids had fun decorating the driveway while we got to know the parents! :) 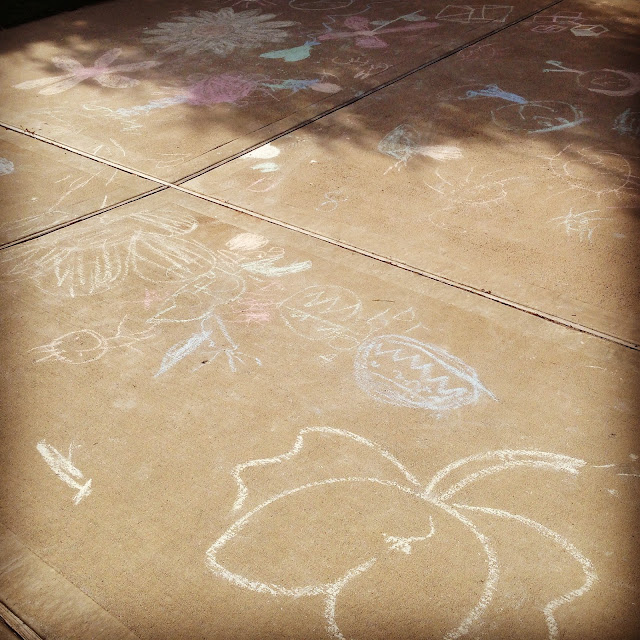 We had a women's gathering at the Warehouse the other night. There was a chocolate fountain... 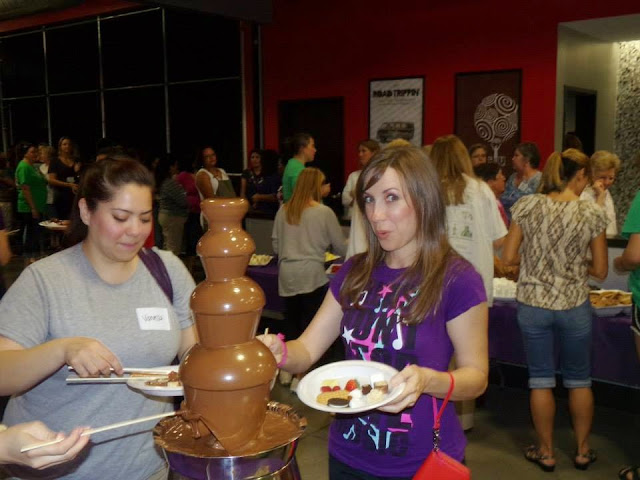 We learned how to paint...

And we got to shop! 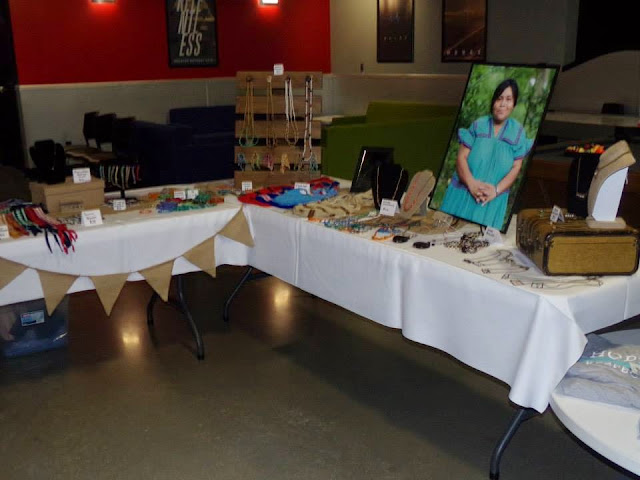 But this was more than just shopping...it was an opportunity to help provide income for women in the Guaymi tribe of Costa Rica (where my friend Heather is a missionary). My church has "adopted" the village where Hands Producing Hope is providing the economic, educational, and spiritual resources to help women and families rise above poverty. It's pretty super! And I was honored to host Rebecca (the founder of HPH) at my home on the night of the event! :)

Oh, and we got a picture of half of the people in my church who share my name {or slightly less than half? I can only think of six of us at the moment, but there could be more...} 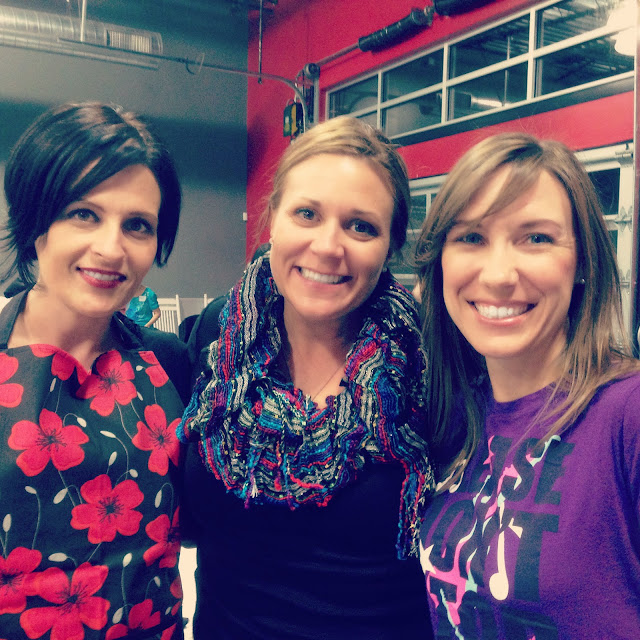 Pepper has been in desperate need of a haircut for awhile now. We finally got around to cutting it yesterday, and I think we cut off enough hair to make a whole other dog! 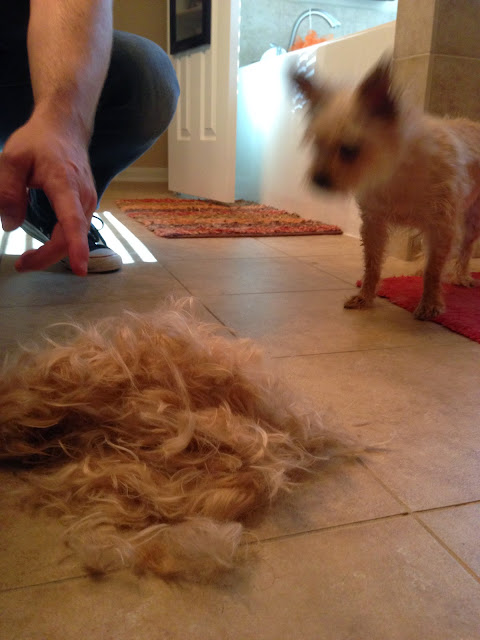 And the best part of my last couple of weeks was a meetup with some people from our Texas OM group! 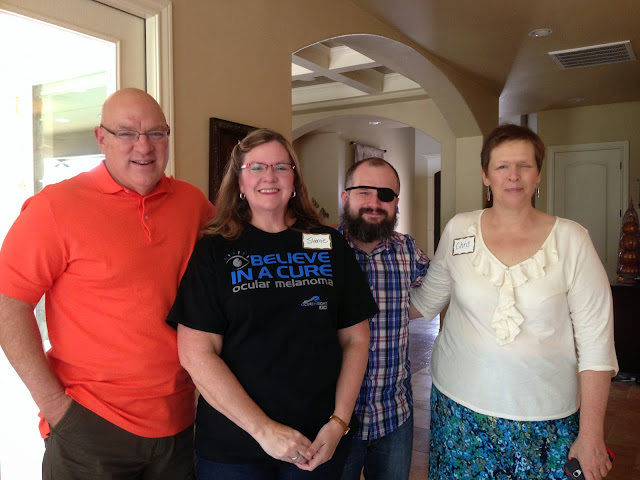 Gary (the guy on the left) was our host, and he just so happens to be our friend's mom's pastor! Since ocular melanoma is such a rare cancer, we don't generally know anybody who has heard of it, much less who knows anyone else with it. So it was surreal to hear of Gary's diagnosis. As it turns out, though, there are quite a few people with OM in his area of Texas, which is very odd (& worth studying, imho). Anyways, while we were in the area, we discovered the road that was named for our friend's family. The following picture makes me laugh, so I thought I'd share it with you! :) 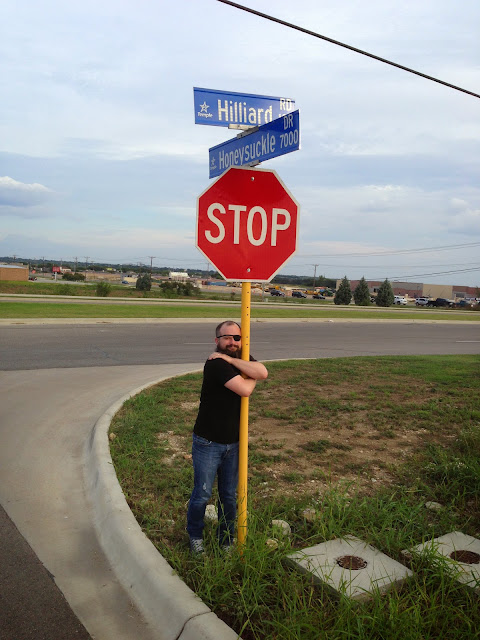 Anyways, we met up with four other couples {and some of Gary's family ü} for dinner on Friday night. We took turns sharing our stories and went to Gary & Bev's for delicious pumpkin cheesecake! We enjoyed getting to know each other, and it was great to discover that there were other Christians in the group who share the same struggles but also the same hope that we have.

The next morning, we met back at Gary & Bev's. Two of the couples weren't able to join us, but another lady drove up for the morning. We were also joined by the surgeon who had removed a few of the eyes in the group. That sounds strange, but I don't know how else to word it! It was neat to hear his perspective, and he seemed to gain a lot from our perspective as well. I hear that from doctors and researchers quite a bit. They rarely have the opportunity to just sit and hang out with patients, so they tend to soak up all that we have to say (at least the ones I've been around are that way).

Today's song was written by the awesome, talented, and humble Ross King. You should totally buy it! Natalie, wasn't this song Z's favorite off of Ross' album?! I'd like to know his opinion of the Newsboys' version! :)

I hope y'all have a great week! I'll try to post a little sooner next time! ♥

Zion said…
Sorry about all the stress :( I understand and KROGER! Really, I am not good at change either. I am not! Your pictures are lovely though.
October 13, 2014 at 12:25 PM

Brooke said…
i'm sorry you're having a rough time. planning on emailing you soon. just trying to get caught up on life after vacation
October 17, 2014 at 2:45 PM