I really have quite a few things to share with you, but I have to narrow my pictures down by at least a couple of hundred before I can tell y'all about Venture! For now, though, I need to tell y'all about a tragedy. Maybe even a conspiracy!

First, my baby brother & I went to this adorable little coffee shack in Katy on Saturday. It's the only place left in my part of the world where I could buy a Peanut Butter Mocha Frappe. Did you see the word could in that last sentence? Sadly, I found out that it had been discontinued. And I was so very disappointed about it.

But my hope was restored when I remembered that we were headed to the Dallas area for Venture, so I'd be able to go to Braum's and get my Peanut Butter Hot Fudge Sundae with German Chocolate ice cream! Aside from my friends & family, that sundae is the one thing I miss about Dallas.

You can imagine my excitement as we arrived at Braum's on Tuesday! In fact, I posted this on Instagram: 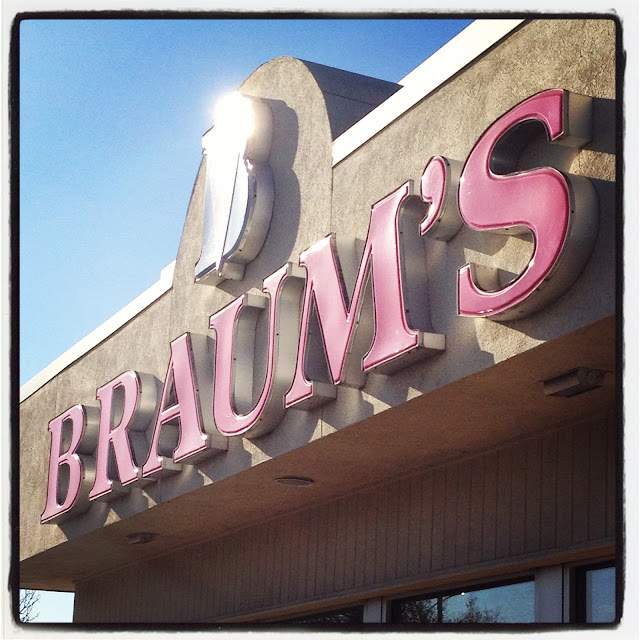 My excitement quickly turned to utter disappointment when my baby girl broke the news to me that my sundae was no longer available. I was in disbelief! In fact, Aaron [youth pastor Aaron, not baby brother Aaron] was amused at the look on my face. But I'm pretty sure the look was something akin to heartbreak. No lie. The guy behind the counter explained that it had been discontinued about two months ago and offered the hot fudge sundae with peanut butter ice cream as a substitute. As if anything could possibly come close to being a substitute for the best sundae ever! I got it anyways, because I honesty didn't know what to get. I've been getting that sundae (and only that sundae) for 15+ years.

As you'd guess, it was nowhere near as tasty.

Last night, my baby brother messaged me to say that he was with Chris when I sent the following text: 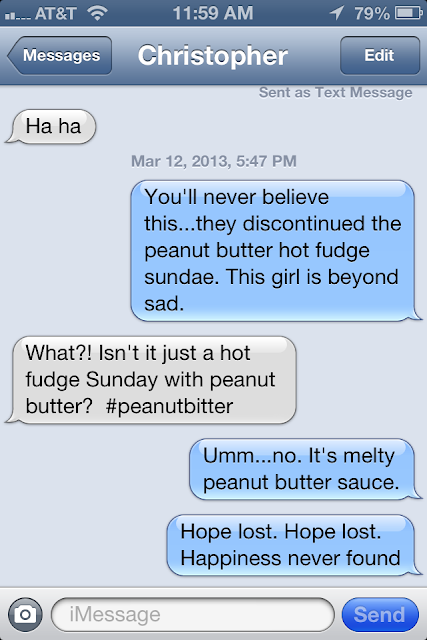 Did you see that? #peanutbitter ü Since Aaron was with me at the coffee shack, he is well aware of how I feel about the discontinuation of peanut butter/chocolate things. He thinks it's a conspiracy. Who wouldn't like peanut butter & chocolate together?! Why would they do this to me?! Sigh.

Zion said…
Yeah this is definitely a problem because I LOVE peanut butter and chocolate. I had a similar situation with Ben and Jerry's.
March 16, 2013 at 6:12 PM