I'm a smidge late on my weekend post, but better late than never! There's no reason for today's song other than it's NTB. And I have a lot to tell y'all about, so I'll dive right in...

Y'all probably heard about the flooding we had in our area a couple of weeks ago. We were fortunate to be in an area that drains well, but a lot of the Houston area wasn't so fortunate. The kids were out of school for a couple of days, and we had damage to a little bit of the church. Cody and I went exploring the first afternoon (after 7.5" of rain in less than 12 hours), and we couldn't believe how high the creek was in our neighborhood! I'd like to take some better pictures of the normal level, but I snapped a shot today so I could show y'all a quick comparison of this area where the sidewalk was covered: 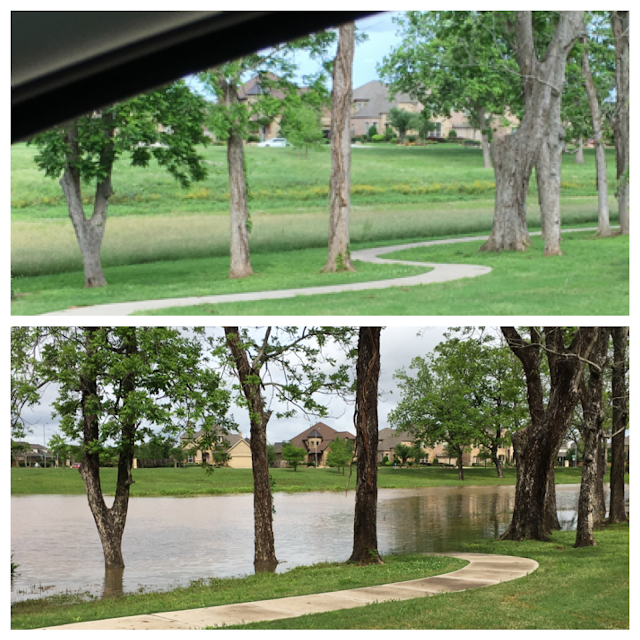 That same day was Kristi's birthday, and I stopped to give her birthday greetings after Cody and I explored. We talked about how it was also Elly's half-birthday, and next thing I knew she and Grace were offering to bring over some of the cake that Grace had made for her mom's birthday! They brought it over after dinner, and the boys entertained us by singing the birthday song and playing random instruments that we had upstairs! So fun! Ü 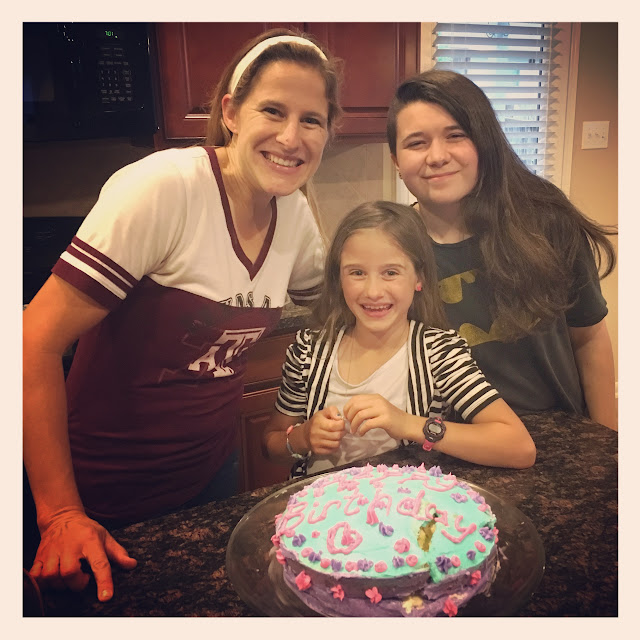 I got to take a trip to my beautiful cousin Kendra's last weekend, and my awesome cousin Kevin happened to be visiting as well! 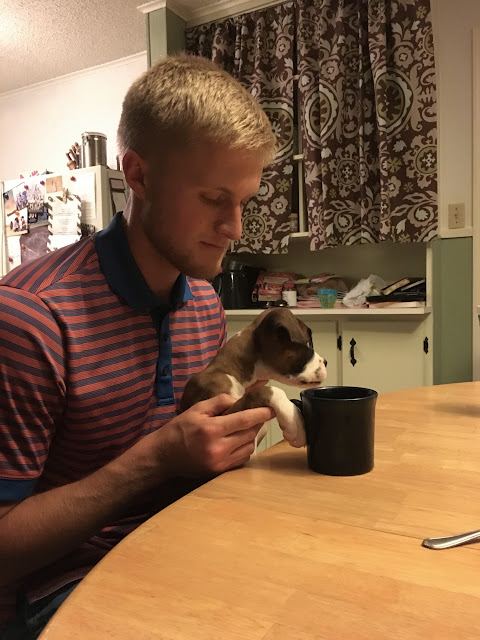 Judah is just as sweet as ever! 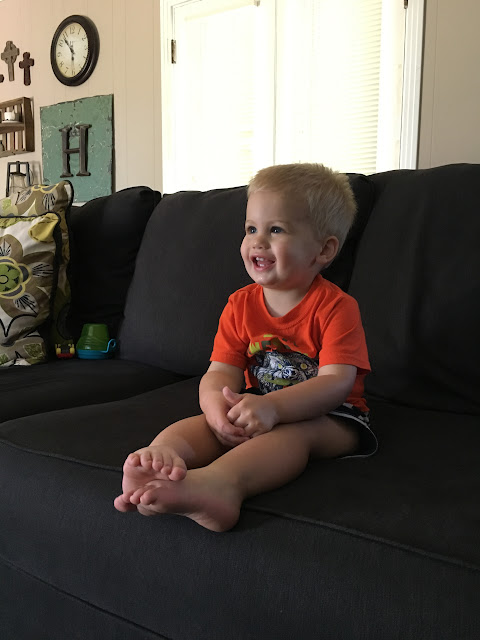 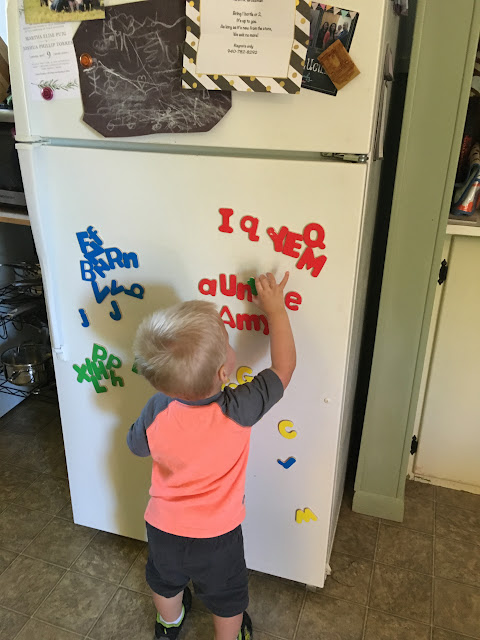 We had a great weekend! Their friend Cason came over for dinner and games on Friday night, & I got to attend a fun ladies' event with Kendra on Saturday night! We forgot to take a picture together (again), but I got a candid shot with Kendra when we were outside with the new puppy! 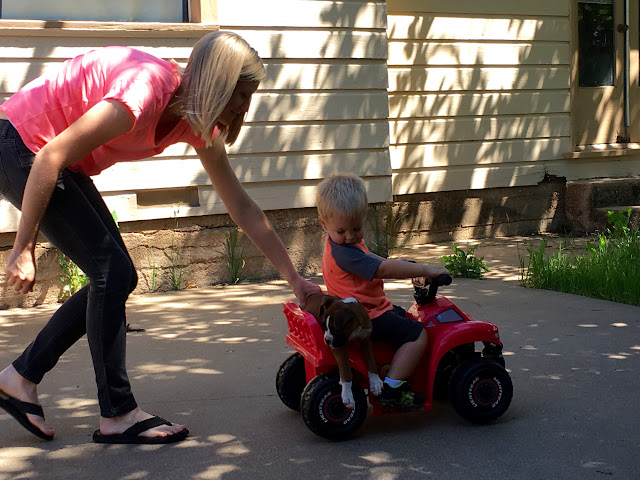 This is incredibly random, but I took a selfie the other day, and I'm sharing it with y'all because it was a rare day when I accessorized well! I matched my necklace with my shoes and was quite proud of myself! I took the pic for Kristin, because she got the necklace for me when she was in India: 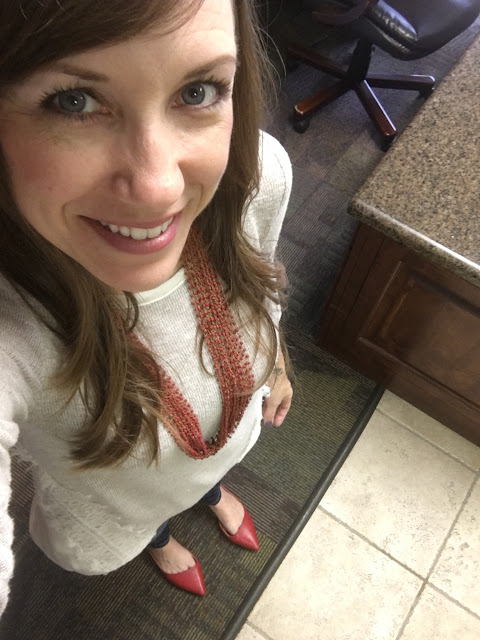 We hosted a simulcast of Secret Church at the Warehouse on Friday night. It was SO good!! 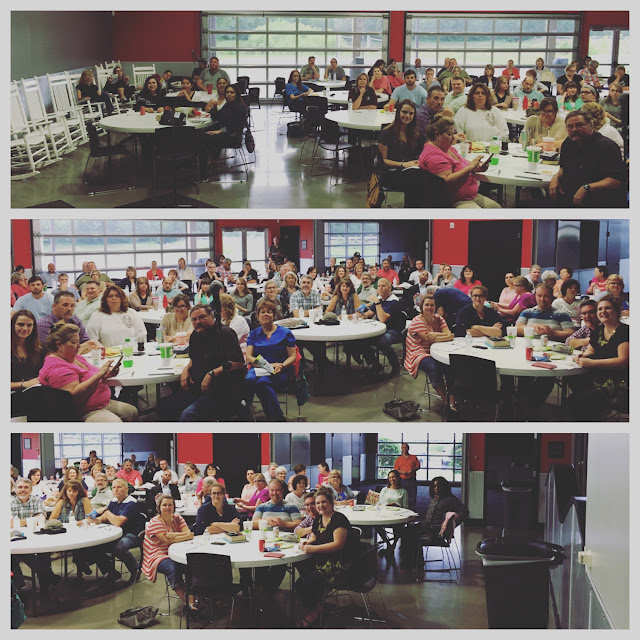 Laurien & I finally got to visit A 2nd Cup, a coffee shop that is raising awareness and funding after-care solutions for survivors of human trafficking. Plus they have good coffee! 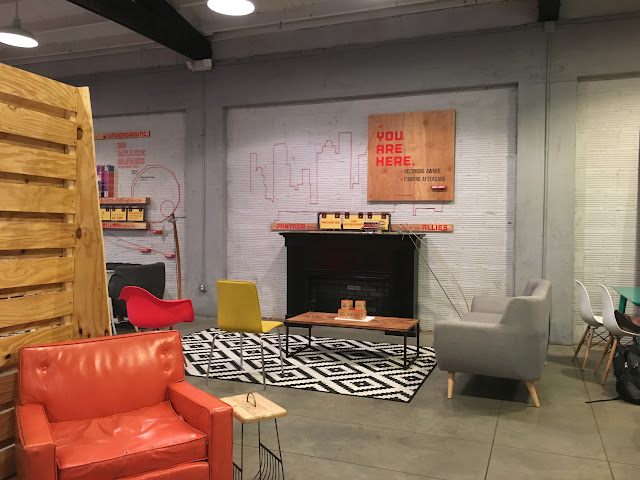 We also visited Sugar Hill Studios, where her brother was doing his audio engineering thing! 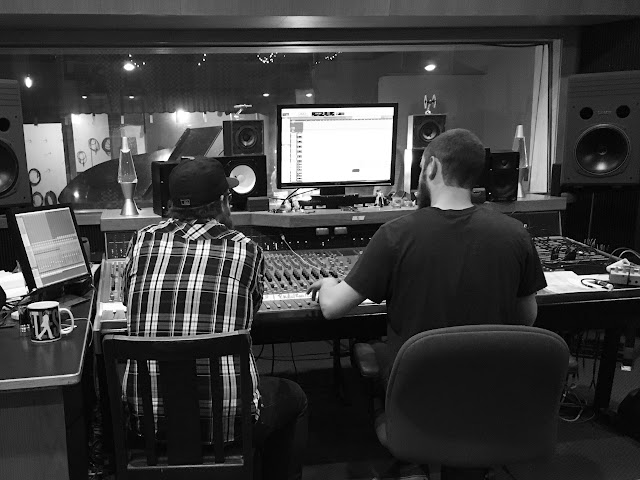 I also got to see my dad and baby brother on Saturday! And I celebrated Amy's birthday with my birthday girls last week. But I didn't get a picture of either of those things. I promise they really happened! ;)

You may recall the track struggle I mentioned a couple of weeks ago. I am excited to say that tonight we signed Cody up for an AAU team, Richmond Gold, for the summer, and he starts practicing with them tomorrow! It all fell into place super quick, but it was very evident that we were supposed to do it. This afternoon, a coach from school asked Cody if he had run the 800 in 8th grade and said that Coach from RG needed a 4th runner for the 4x800. When Cody told me about it, I emailed Coach. He said that if Cody was interested, he should go to the track tonight because they were finalizing the team this week. We went up there and talked over a few details with Coach. He talked about having Cody run the 1500 and 3000, similar to what he runs at school. We mentioned what Coach T had said about the 4x8. And when he realized that Cody was the right age to run with the three other guys, his eyes lit up! He thinks they'll do really well. Another coach we know (who we seriously considered joining last summer) came up to Cody as I was filling out the registration form. He had been asking his son where Cody was, because he wanted him on the team. These two coaches previously had two separate teams, both of which Cody would have loved to run with. They both have a son or grandson who Cody runs with at school, and they are both very good. The fact that they are now one team is like a dream come true (only we hadn't even thought to dream it)!

I suppose that's all for now! I hope y'all have a great week!