(by The Original Movies Orchestra)

Today was Cody's 9th birthday party, & it was Star Wars themed {just in case you hadn't figured that out with today's song choice!} My mister made pretty neat invitations that looked like the opening crawl of the films. It started with "Episode IX: A Year Older" & went on to give the details of the party. The front was like the title of the films: 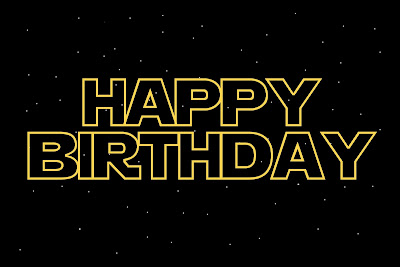 My kids dressed up as Luke Skywalker & Princess Leia (sorry it's blurry ~ I'm really not a great photographer! And before any "Jedheads" get on my case, YES, I'm aware that what Princess Leia's holding is actually NOT a Star Wars gun ~ Cody was sure to point that out!) 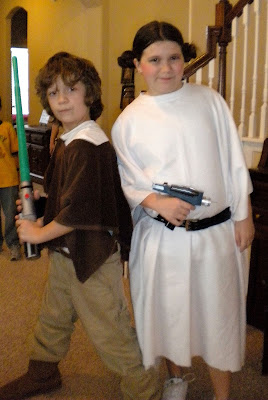 We made cupcakes that we iced to look like dueling red & blue lightsabers. Here's my silly boy about to blow out his candles! {My mister had the great idea to do the "IX" instead of the usual #9 for the candles. Smart, eh?} 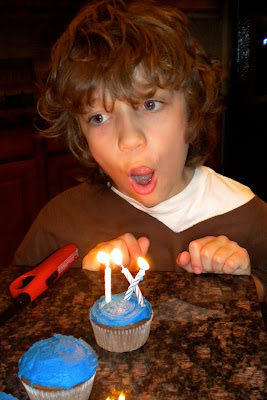 I planned a few activities (that I found online ~> I love the internet for it's help when I don't feel so creative!) There was a hunt for clues that led them to the garage, where we had the piñata. It was a soccer ball that we altered to look like Luke's training orb from Episode IV. They hit it with a broom handle that I turned into a lightsaber. [For the record: the orb didn't shoot out beams of energy (or whatever), just candy!] :) 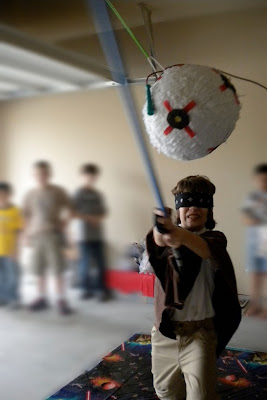 In all, I'd say it was a great day! Good night! May the force be with you.