I finally have a chance to tell y'all about my new living room furniture! We have needed to replace it for several years now, but other things have always taken priority. Our poor sofa only had one side of one cushion that wasn't terribly worn. I should've taken a picture before we got rid of everything, but I found this one from right after we moved in (hence the box & stuff behind the love seat & such): 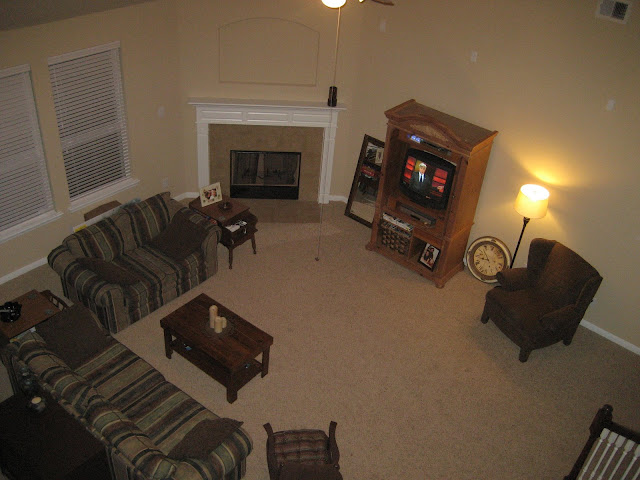 We started replacing everything just before Thanksgiving, but the Christmas decorations were up by the time we got it all. I'm just now getting around to finishing the room & taking pictures! Though it isn't completely finished {ahem...fireplace niche}, this will do for now! {Oh, & please ignore Davy Crockett, the card on top of the entertainment center, Pepper, & whatever other random objects I failed to get out of sight before taking pics!} Without further ado, this is the room where I'd love to have you join me for a cup of coffee... 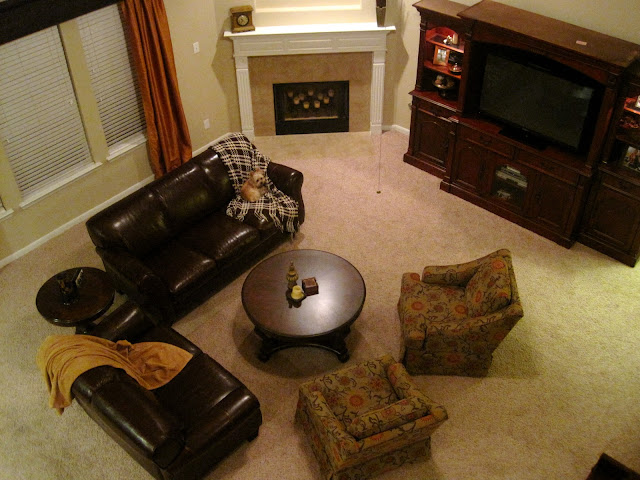 Our first purchase was the sofa & love seat. Though I had planned to buy new, I found out that our friends Bob & Beth {you may remember them from the post where we paid off our debt} were selling their like-new leather sofa & love seat. I wasn't really wanting leather, but Chris was. I couldn't remember what their furniture looked like, so I sent Chris by their house after work one day. He liked them (& the price was right), so he said we'd take them. For anyone who knows me, you must be shocked right now. I know I still am! I guess it's just evidence of God working in me to not feel the need to be in control of every little thing!

Then came the entertainment center...We knew of one that we could get from our friend's mom (who is an interior designer & has access to furniture at wholesale prices). I decided to look around before making the commitment, & I fell in love with a different unit. Without even trying to bargain, the salesman offered another 20% off the price on the tag. It was still a couple hundred dollars more than the unit I could get from Naomi's mom, though. And I felt like Chris should see it & decide with me. We drove over there that night after Chris got off work, but most of the lights were off in the store. We decided to try the door just in case. As we were walking towards it, we saw my salesman walking toward us. He looked surprised to see me & disappointedly said, "We're closed!" He explained that they decided to close early since no customers were in the store, and it was the day before Thanksgiving. Then he said that they were having a Black Friday sale & pulled a flyer out of his pocket saying, "I knew that the Lord had me grab this flyer for a reason." Turns out, they were going to have 36% off everything if we got there by 8:00 on Friday. We had hoped to get him to give us the unit for 30% off the sales price, but we didn't even have to bargain with him for the 36%! It ended up costing less than the unit we were originally going to get, and it was nice going in that Friday morning knowing exactly how much we were going to pay & without having to negotiate! 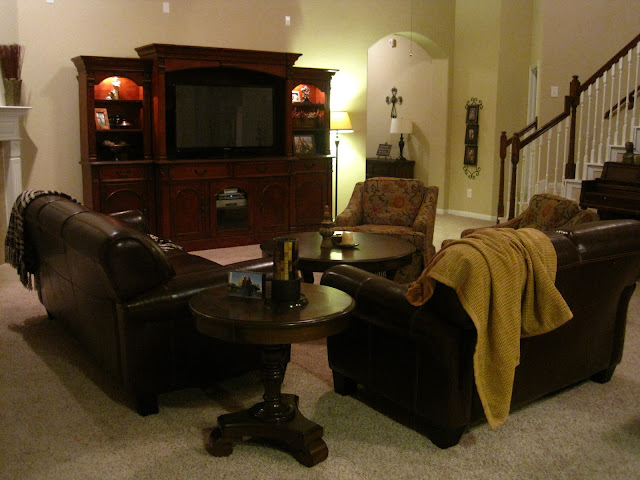 Chris found the TV. It didn't really matter to me what we got, as long as it was bigger than our 14-year-old 27" box TV. My main goal was for him to be able to read the guide & subtitles. By the end of the day, the poor guy's good eye is so tired from straining to see all day, so he was unable to read anything on the old TV. He would occasionally push the guide button, forgetting that it was useless. And if we were watching something with subtitles, I had to narrate for him. Fortunately, we aren't into foreign film. We do occasionally watch a show where someone briefly speaks in another language, or there's a time & place or something. And game scores were impossible to read as well, though that wasn't really a concern for him. I, on the other hand, could barely read the scores, and my vision is perfect! Anyways, I wish I could tell you some details about the TV, but all I know is it's a 51" & had good reviews on several websites. There seemed to be a big price jump once you got bigger than a 51", so we thought it would suffice.

I saved the best for last: my super cute chair...We had looked at furniture a few days before we bought the sofa & love seat, and we found a glider that had a colorful pattern on it. We liked the idea of a patterned chair, because it would go with a lot of different solid-colored couches. So we decided that I should find the chair I wanted first & go from there. I know that may seem a little backwards, but y'all know how I feel about rocking chairs! {Do you remember my old chair & the tragedy of '09?} A rocker or glider really was the only thing I just had to have in a new living room set. I really didn't care too much about the rest, though obviously I wanted it to look nice. On the day that Chris was set to go look at Bob & Beth's furniture, I stopped by another furniture store to look around. I ended up finding the perfect little swivel rocker that makes me happy! =) Then we got a coupon in the mail, so we went back & bought another one ('cuz everyone kept stealing my chair)! 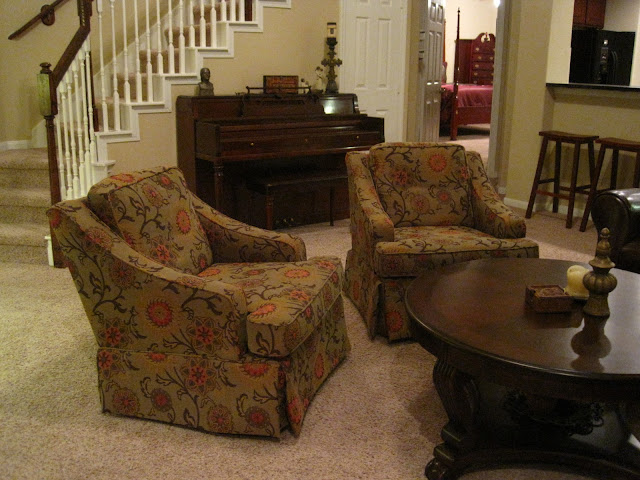 As for the rest of the room...

Thanks to Pinterest, I found a tutorial for the cornice board (that Chris & Brian helped me make), & the curtains came from IKEA (for super cheap). 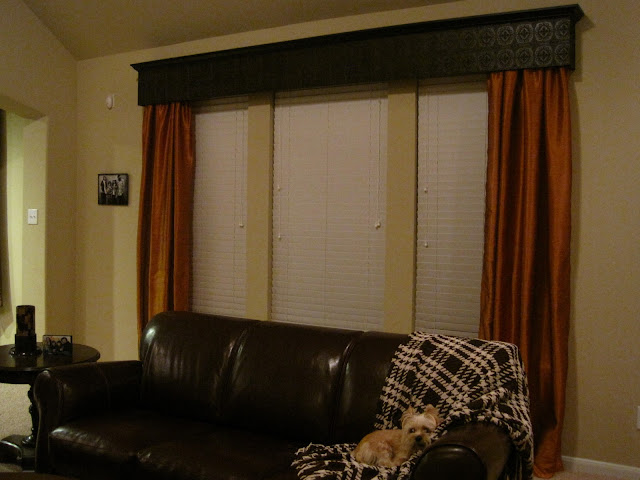 I accessorized with stuff I already had & a couple of 1/2 price items from Hobby Lobby. {I'm sure I'll continue to move things around & look for other inexpensive items to replace things I'm not in love with.} My dad technically owns the piano that was Mema A's, but he let us use it years ago & is fine with us hanging on to it. {& I love how nicely it fits under the staircase! I should also point out that the piece of artwork I mentioned awhile back from Studio JRU matches the chairs quite well!} The coffee table & end table came from a little furniture store with the nicest saleslady in the world. {Random side note: she asked about Christopher's eye, and it turns out her husband's niece had OM. She asked if he'd mind if she put him on her prayer list at church. That's sweet, huh?!} For the record, I'm aware that the houndstooth/plaid throw doesn't exactly match, but we already had it & love how soft it is. {Plus, I haven't learned to knit well enough to make an afghan yet, & Pepper likes it!} 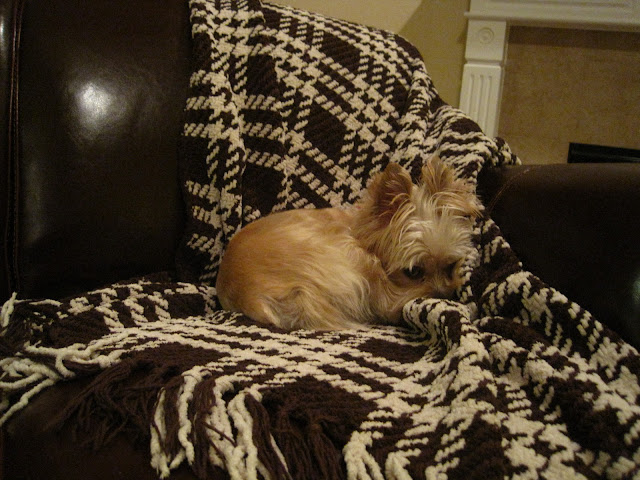 That about wraps it up...

I do have to add that from the beginning of the process, we felt God's guidance. I know that may sound silly, but it's true! We have entrusted our finances to Him, and we ask for His guidance when it comes to what we spend our money on. Furniture can be a substantial sum of money, and we wanted to use it wisely. We ended up getting a sofa, love seat, 2 super cute chairs, entertainment center, coffee table, end table and TV for barely more the list price of the entertainment center alone. Even with the extra chair, we came in nearly $500 under budget! And yes, Dave Ramsey, we paid cash! ;)

Zion said…
WHOA! That is a great deal. The couch and love seat alone are worth more than that. I totally hear ya in regards to your final paragraph. I just went through the process of decorating/staging our entire house and while it was daunting at times I felt like God was working it out (just like the light
January 18, 2012 at 8:00 PM