You've probably read about our hotel fiasco, my little brother Ivar, Kirby's wedding, and a bit of our time in New Mexico. Now I'll try to briefly sum up the rest of our vacation...

We had such a great time with my extended family, and what made it even better was that my Dad came with us! Well, he didn't technically come with us, as we had originally planned. We followed each other for the first & last parts of the trip, but he made a little side-trip (of about 1,000 miles) in the middle. My brother Ivar had surgery on Tuesday morning, so my dad left New Mexico on Monday night to be there for the surgery & met us at my uncle's in the panhandle on Wednesday night. Craziness, huh? That's the way we roll!

Anyways, we got to my aunt's town on Saturday evening and were able to see almost her entire family at the soccer fields. {My aunt has a huge family ~over 40 people when you count her children, grandkids, great-grandkids & spouses~ and we managed to see all but 7 of them on this trip!} Three of my cousins' kids were playing in a tournament, and they're the type of family that always goes to everybody's events. I think it's awesome, and I was really happy that they were all there! Otherwise, it would have been nearly impossible to see everyone that we saw. I got some strange looks at the soccer field, though. We had driven straight there from the wedding, so I was wearing a dress & heels. Ya. 'Cuz I always wear a dress to watch soccer. My aunt said I could go change at her house, but I didn't want to miss any time with family (some of whom I hadn't seen in 11 years & whose children I had never met). Plus, we didn't realize that we'd be there until after midnight!

Anyways, we had another great day with a lot of my family on Sunday. As I mentioned yesterday, we went to White Sands & Carlsbad Caverns on Monday & Tuesday. We also hung out at a few of my cousins' houses & toured the town with my aunt. They have a bunch of statues that we read all about. I won't bore you with all of them, but here are a couple: 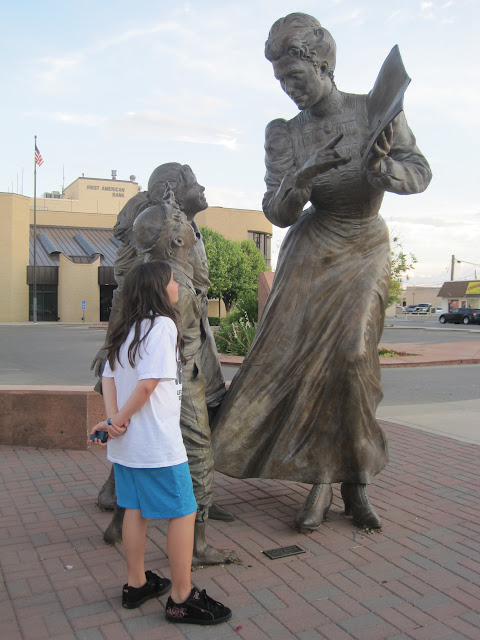 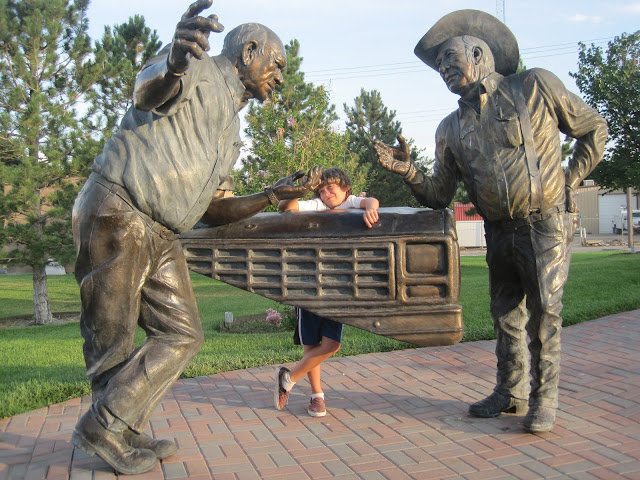 We left my aunt's house on Wednesday & headed to my uncle's in the panhandle, stopping to see another cousin on the way. We also decided to visit the UFO museum in Roswell: 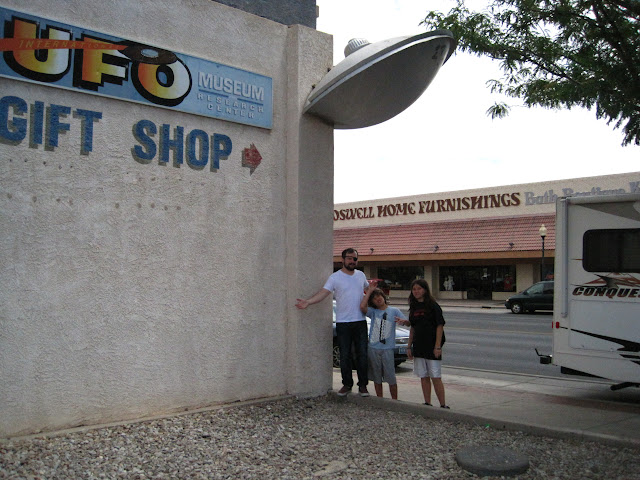 & this mysterious guy ended up in our van: 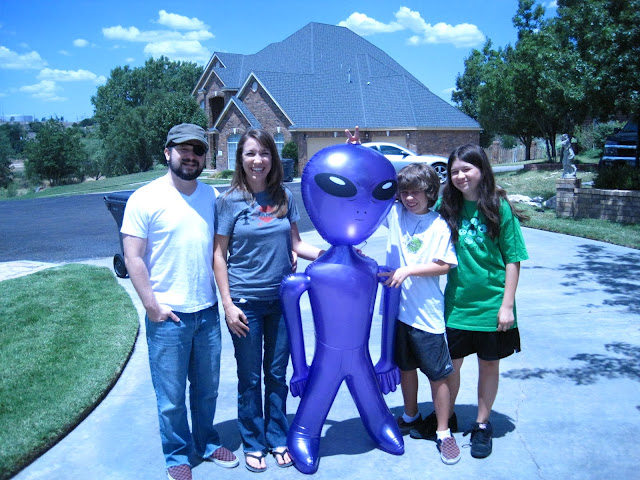 {Don't worry ~ he said that he comes in peace}

My uncle's health doesn't allow him to travel much anymore, so he & his wife had never met my family. I'm so glad that we had the chance to stay at his house for a few days. While we were there, the entire town came out to celebrate Mister Christopher's birthday! There were game booths & everything! 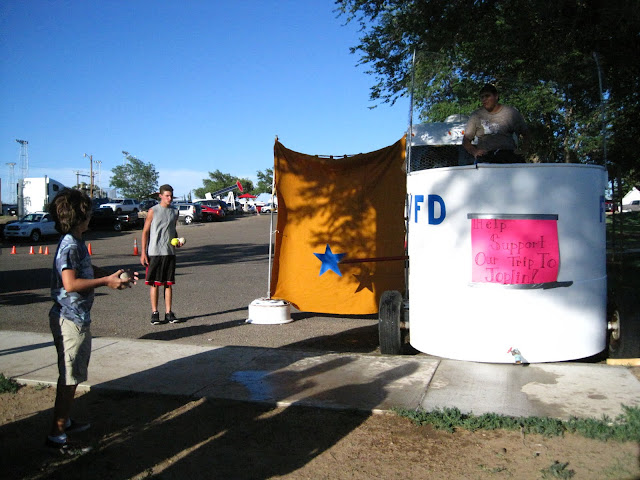 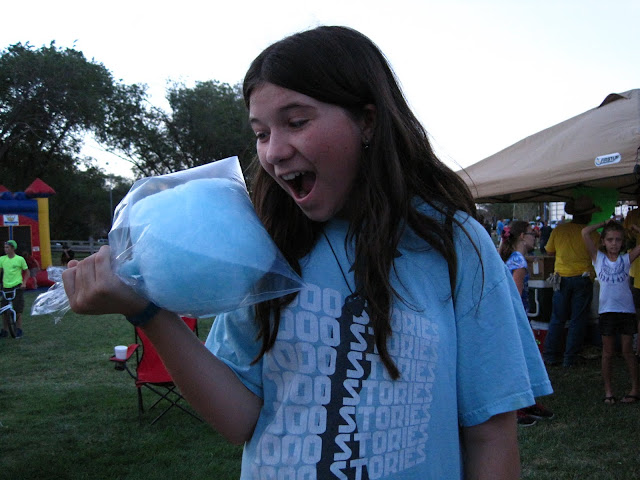 OK, so it wasn't really for Chris ~ the Chamber of Commerce hosted a celebration at the park, & it happened to fall on his birthday. The next day, we ate dinner with the entire family (including the newlyweds). Afterward, we went to my cousin's house where they had a cookie cake for Chris. 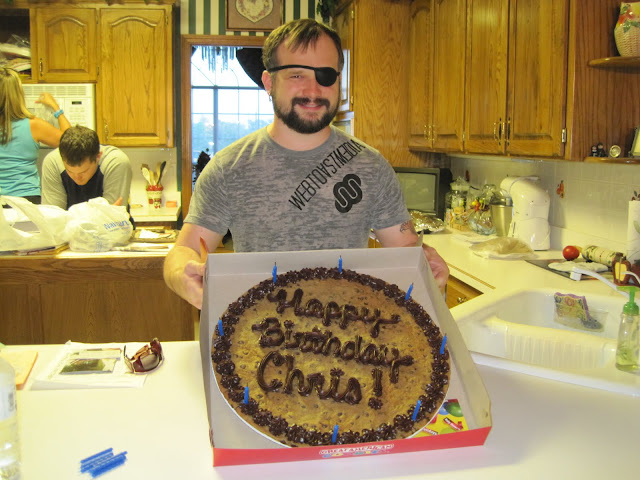 After we sang & he blew out the candles, he said, "I'd like to thank the Chamber..." To which my cousin Kim replied (quite official sounding), "You're welcome." {She worked for the Chamber for the celebration!} We also did some Glow-in-the-Dark bowling, but it was just about impossible to get a good picture.

On our way home, we took a little detour up to Oklahoma. Cody had made quite a big deal about never having been out of the State of Texas until this trip. I kept telling him that he had technically been to New Mexico before. {It was when I was pregnant, so he claims that's not legit!} We tried to figure out a way to go up to Colorado, Kansas & Oklahoma while we were near the top of the panhandle. It still would've been a 4-hour trip, and we wouldn't actually do anything but take a picture. Had we thought of it earlier, we may have taken the little excursion, but we didn't think of it until our last day there. So we looked at my uncle's atlas & found a spot on our drive home that was only 5 miles from the Oklahoma border. 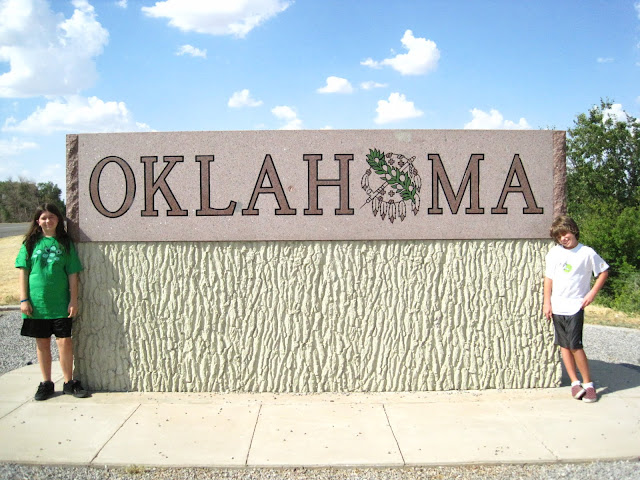 What's crazy is that we crossed the New Mexico border in two different places, and neither one had a sign. What's up with that? Had we gone through Hobbs, we would've seen a sign. Next time, I guess we'll go that way...

One final note for people like Brooke & Laura who geek out at stuff like this: we totally stayed under budget on this trip! {Even with spending twice the amount for the hotel & splurging on a few things!} How about that?!

Thank you for your comment about pride and blogging today! I love the part about memes... so true!! I hadn't thought of that. Thank you! :)