I've seen all those Christmas shows on TV
Blankets of white powder; my, how grand
But while you've got snow and holly, I'm feastin' on tamales
Sittin' on my back porch with an iced tea in my hand

In lieu of a Scrobbled Saturday post, I thought I'd share this song with you! Obviously, we didn't need it to prove that we don't have white Christmases in our area. In fact, 2004 is the only white Christmas on record in Houston. {Though we didn't have snow on the ground in our area that morning, we had snow on Christmas Eve ~ which is seriously unheard of.} Lately, we've had some beautiful days around here, & I'm loving it! But it's just not wintery! I think we got up to 83 degrees on Thanksgiving, last Saturday was 80 degrees, there's a high of 74 today, & I think we're supposed to hit 77 later this week. We've had some cold mornings, and I wore my boots for a couple of days. But still! That's just craziness! Anyways, today seemed like a good day to post this song!

My mister's work Christmas party was last night. There's always yummy food, good conversation & a comical thing or two that probably aren't worth mentioning! You know how we live in such a small world? Well come to find out, one of my mister's co-workers & her date graduated from high school with my little brother. Weird, huh? Anyways, here's a picture of my mister & me last night: 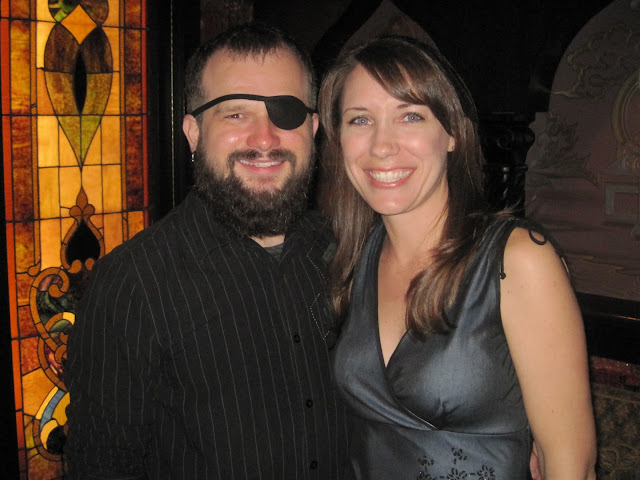 I have a little update on my mister. We went to his ocular oncologist & retina specialist yesterday. He had another ultrasound, but it wasn't the type that Dr B likes, so he didn't even go over the results! {He just wrote things angrily on the paper & mumbled to his assistant} We learned last time that he feels like another kind of ultrasound is more accurate, but we had a different technician perform it this time. We had seen the pictures beforehand, and they showed some good measurements, but I guess they weren't right! The ultrasound technician had trouble finding the tumor, though, so I guess it has shrunk some more. This doesn't really have anything to do with his future health or anything, other than proving that the tumor is sterilized/isn't growing. So, obviously, that's good.

Dr C said there is a small spot indicating new damage to the retina, which is just the continuing effects of radiation. Some new vessels are forming around the treated area (where he has been having the circulation issues). These vessels aren't a good thing though, because they form very haphazardly & can cause glaucoma. If things worsen, he will be treated with an injection that should keep him from losing the eye. So, Dr C is keeping a close eye on it all.

We have scheduled a contact lens appointment for the next time he sees Dr C. I've heard of a blackout lens that could be worn instead of the patch. Dr B called it a "cosmetic" lens, though. So, I'm not sure if insurance will cover it. If they don't, he'll just stick with the patch. We'll see...

I hope you have a super great weekend!!

Zion said…
That's funny. I have never heard that song. We had a really white Christmas here last year, but I was really pregnant and not feeling too well so I didn't get to enjoy it :( I am hoping for one this year in Kentucky, but even up there it's a slim chance.
December 11, 2010 at 7:02 PM