In lieu of Scrobbled Saturday, I'll proceed with Day 4 of the 12 Days of Christmas Song Challenge: guilty pleasure song. Today's song comes as no surprise to my friends, though I hadn't realized how predictable I was until this year ~> two recent incidences occurred regarding this song & yours truly. Once, Jana & I had just gotten into her van when this song came on the radio, & she said that they were playing it just for me! And another time a group of us were discussing our favorite Christmas songs, and Felicity said she knew what mine was. At first, I wasn't sure if she was referring to a Relient K song or this one. She looked at me like I was a crazy woman & said this one. For the record, this isn't my absolute favorite, but it's sort of a classic Christmas song for me. 'Cuz I'm a weirdo. But y'all already knew that...

Moving on to random events of the week...I must post my disclaimer: I am exhausted, so expect even more randomness than usual! Yesterday was another one of those days when I went from one thing to the next to the next: answered phones at the church, picked Cody up from school, met one of my former MOPS moms for coffee, took my kids to the church hayride, went to Christopher's work Christmas party, then finished off the night/morning at a sleepover with my most favorite girls on the planet. Of course I didn't get adequate rest & woke up way earlier than I had to. But it was all good, because Nicole & Julie were also awake so we got to chat for awhile before getting up & making breakfast. I was able to pick Cody up from Alex's and get home in time for a CURE OM Teleconference, which was super great to listen in on! I already knew most of the information that was provided, BUT they made an announcement about a donation of $100,000 a year (for the next five years) being made toward OM specific research!! How about that?!

Last week, I totally forgot to show you what Chris ended up with in the White Elephant gift exchange. Like last year, the girls did real gifts & the guys did gag gifts. Also like last year, he actually stole his gift from someone. Who would want a random little Davy Crockett bust?! He claimed that he wanted it because he wants to invite our friend Dave E. Crockett over. 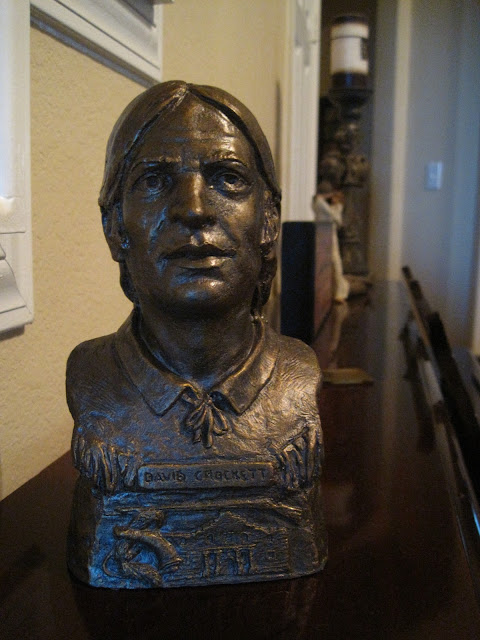 {I think Dave would be honored to have his "namesake" on our piano, don't you? ü Also, ftr, I have not forgotten about an interesting picture I mentioned last Saturday. I just need to get it from the person who took it. It's coming...I promise!}

Marcel the Shell was interviewed on Rock Center Monday night. It was too cute! My absolute favorite part was from 4:51 to 5:12. You should totally watch it {& yes, it's totally worth the 30 second ad!}


Visit msnbc.com for breaking news, world news, and news about the economy


So the pest control guy was here this week, & I was reminded of the fact that strangers often feel compelled to confess things to me. I'm not really sure what that's all about, but I seriously can't even begin to count the times this has happened! Sometimes they confess things they've done, & sometimes they just pour out their life story to me {& it's usually tragic} I try to remember to just sorta sit down on the inside & pray for the words to say. Sometimes no words come out, and I pray as God brings the person to mind in the days/weeks/months to follow. Other times {like this week} I am simply caught off guard & a little speechless {I know a couple of you are shocked that I could ever be speechless, but I promise you it happens. Though rarely!} Seriously though, I simply don't know how I'm supposed to respond when the man tells me about when he was [his words]: "how can I put this tactfully...entertaining" his lady friend on his bed, & his dog nipped at her...What?? I thought we were simply having a casual conversation about dogs!! {For the record, I prefer people telling me their tragic life stories over confessing their sins. In case you wondered...}

We made some cute ornaments for teachers this week! I had seen them on Pinterest, and we made them on a craft day in MOPS. It was fun making them as little gifts! :) 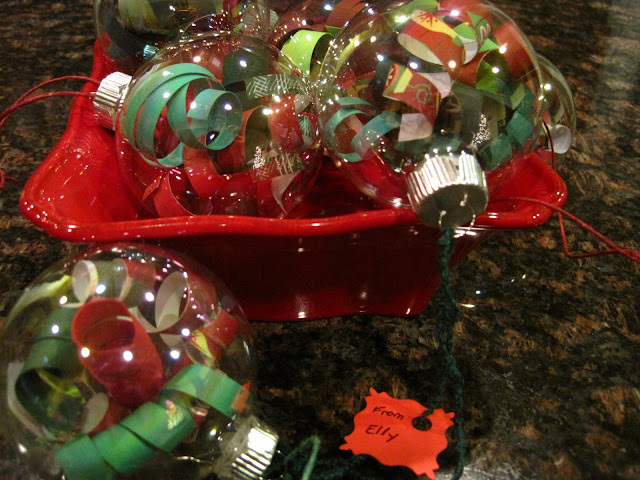 My favorite part of this week was when my baby girl came home early because of finals. The first day she asked if we could go on a Panera date! {& she offered to pay!!} This is something we've been doing since she was in 1st grade {though sadly, we hadn't been since the day I lost my license plate!} It began on a day when I picked her up from school sans Cody. She suggested it, and I didn't have a reason to say no. I think it made her feel special because she got to go without him. And of course, I thoroughly enjoy these times alone with her. We have a list of other places to go on these dates, but when it comes down to it she usually chooses Panera. We kinda like traditions around here! ♥ That night on facebook, Elly posted about a strange little situation we observed while we were out & about. Tears came to my eyes as she commented on the post later. Here's the conversation: 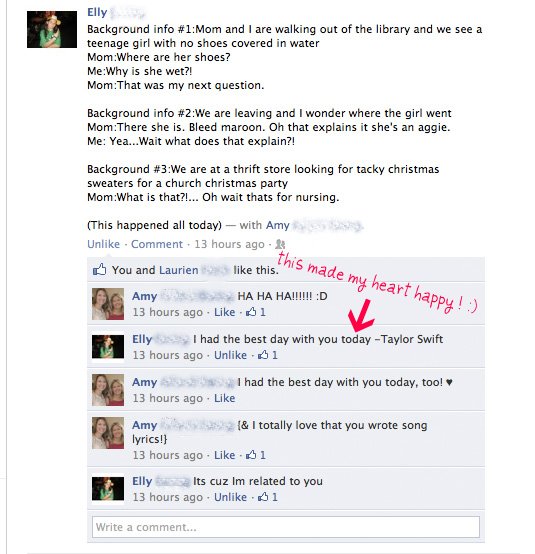 We also saw this sign while we were out: 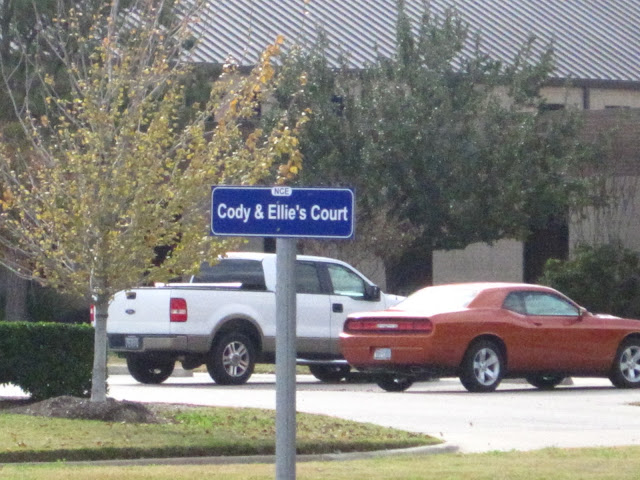 {Ellie is spelled the normal way instead of how my Elly spells it, but she still thought it was worth going back to take a picture!}

OK, so I totally added something completely lame to my list this week. It's been on the unwritten list in my mind, but I was reminded of it & decided it should be on the official list. Plus, I had originally intended on adding to the list as I thought of things but hadn't added anything yet. So there. If you're at all curious, you can totally go check out my list & see if you can tell what I added. I'm not trying to be vague; it just really is that lame. There's not much of a point to it, except that I already have a little song to post for it. And so I can say that I did it. And that is all.

Alrighty, I guess that's enough for now! I should probably put some real clothes on before we head out to another Christmas party! I never got dressed after the sleepover, so I'm wearing the t-shirt & yoga pants that I slept in. I have no idea when I did this last, but it's kinda nice to just lounge around in comfy clothes. I should totally do it more often! Anyways, I'm outta here...

I hope y'all are having a super great weekend!!