The Reliques posted this video last week, and I'm loving this song! :) There's not an official name yet, but I figured if they could post it without it's official name, then they probably wouldn't mind me doing it, too! My favorite part of the song is when they say, "There’s more to life than living if you just let it go." ♥

My sweet boy made me lunch today! I was working on something & said, "Hmm...what can I have for lunch?" Cody didn't say anything, but a few minutes later he called out from the kitchen, "How many chicken nuggets do you usually eat?" Not only did he nuke some nuggets, he made the plate all cute! He took this picture before bringing it to me! ;) 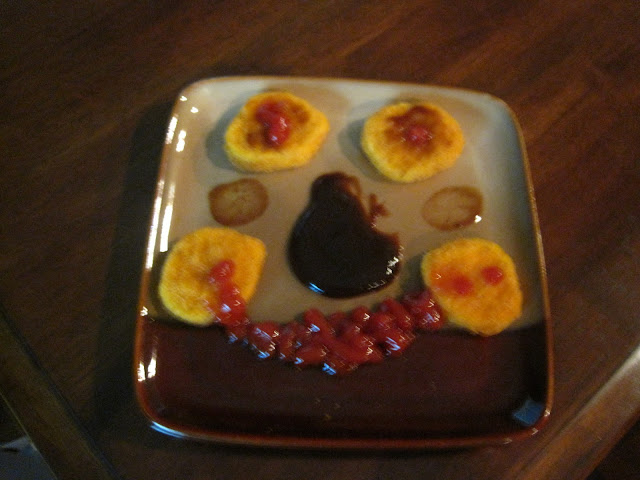 So I failed to tell y'all that I joined Twitter a couple of weeks ago. It was one of those trends that I was planning on resisting...but there was a quirky & fun OM patient that I wanted to follow, so I had to join. Since I'm not interesting enough to update my status very often {& because I can't do things the easy &/or normal way} I decided that I would only post song lyrics. Go figure. So it's pure randomness, as you might expect. & it was all good until my beautiful cousin mentioned me in a tweet. I wasn't sure how I could go about replying to her while staying consistent with my song lyric thing. But I managed to do it, & then she replied in lyrics, too. So. much. fun!

I got some new Christmas tunes this week! My friend Nate's son has a new Christmas EP that I downloaded the other day, & it makes me smile. I also got more free music from the Mocha Club. They sent free music two years ago, & that was how I discovered Amy Stroup. Funny thing is there was a Gungor song on that same album, but I didn't really pay attention to them back then! I heard Amy Stroup's "You Make the Cold Disappear", & I sorta fell in love. After hearing that song, I didn't really listen to the rest of the album much. If I had only paid attention, I could've been a Gungor fan for way longer. Then when people started telling me about them, I could've been like, "Because I'm such a trendsetter, I've been a fan since 2009..." But no, I got sidetracked by Amy Stroup. Anyways, this year's Mocha Club gift album has songs by some of my favorites {Hawk Nelson, Seabird, & Amy Stroup} as well as Dave Barnes, FFH, and a few artists I've never heard of before. And Elly was quite excited that Andrew Ripp has a song on there {he played at camp this summer}. Who knows...maybe I'll discover a new favorite. I'll keep you posted!

Jennifer {Studio JRU} said…
Aww... the chicken nugget smile is making me smile. How sweet is that?! Love it! So many people tell me I should get twitter... but I have been holding out. I don't think I have anything to say! lol
December 3, 2011 at 8:48 PM